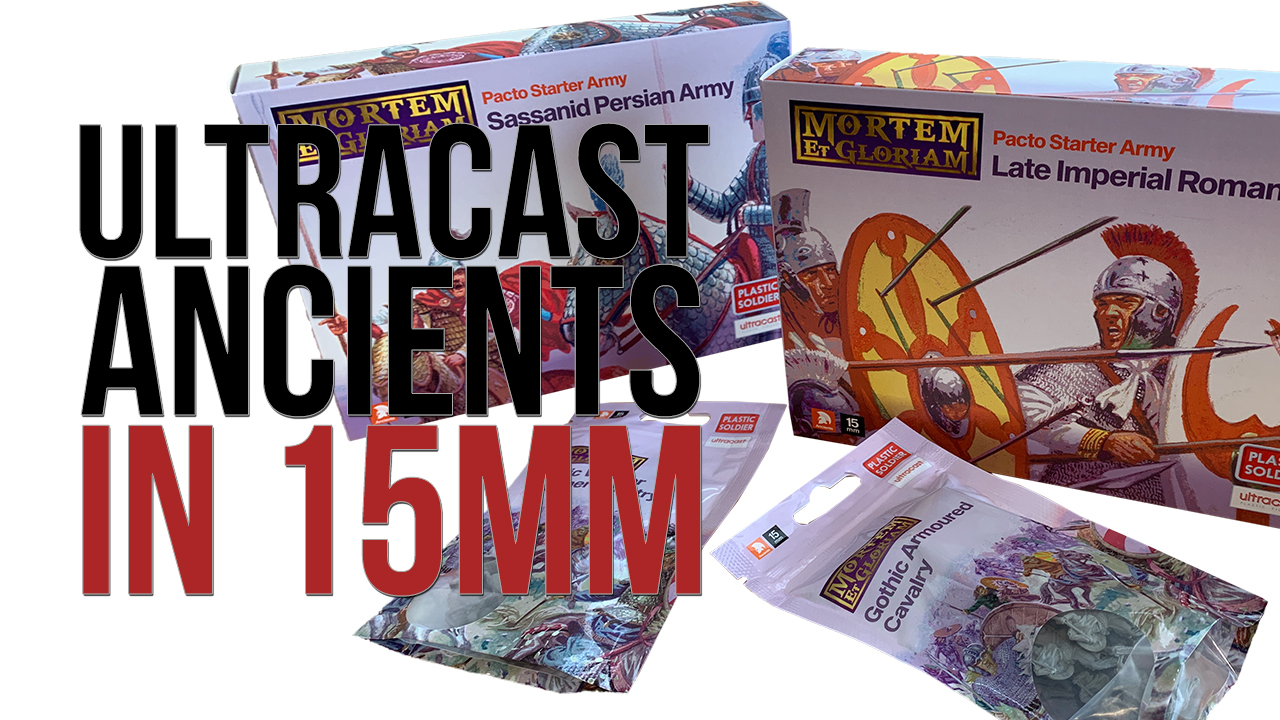 I have to admit to becoming a little misty eyed when I opened the review parcel this week, as it contained two boxes of 15mm plastic figures from Plastic Soldier Company. The box art and the sprues of plastic miniatures within took me back to the heady days of my youth and the excitement of opening a new box of Airfix soldiers! These boxed sets are designed to be used in conjunction with the “Mortem et Gloriam” (MeG) ancient rules set, the idea being that there is everything you need in one box for a small (or pacto) game of MeG. This allows anyone interested in the rules to buy two boxes of opposing armies, base them up and start playing. The miniatures are also of interest, of course, to anyone involved in gaming with 15mm Ancients, as they are cast in a new sort of cross between plastic and resin, called Ultracast, which, the box blurb states, is strong, flexible, holds paint well and requires no undercoat. The two boxes we received for review are the Sassanid Persian Army and the Late Roman Army.

The Sassanid Persian box comes with 2 mounted Generals, 22 Heavy cavalry, 8 Horse Archers, 16 unarmoured infantry, 16 skirmishers and 2 Elephants! The heavy cavalry come in a mix of barded and unbarded horses and are all attacking with a two handed spear. The detailing on the miniatures is good, with enough definition on the armour and barding to use washes or contrast paints to create depth and shading. The horse archers are all light horsemen, firing their bows to the front, over their horse’s heads. Two of the light horse in my box had barding on their horses, with the other six wearing no armour. The unarmoured infantry have spears, helmets and shields and are posed with half attacking with their spears and the other half standing. Both mounted generals come with their legs moulded to their mounts but with separate upper torsos, so they can be posed how you wish. I found the fit between body and legs a little tricky, but nothing a little bit of filler or a thick glue cannot cure. The real treats in this box were the elephants, who come with howdahs moulded onto their backs. They are both differently posed, and come with a separate sprue on which is a mahout, a warrior to go in the howdah, two tusks for the elephant and the fourth side of the howdah. This is a nice touch, allowing you to paint the inside of the howdah, position your warriors within it and then glue the fourth side into place.

The Late Roman box contains 2 mounted Consuls, 2 mounted Generals, 8 Cataphract Cavalry, 12 armoured cavalry, 8 horse archer cavalry, 24 armoured infantry, 24 unarmoured infantry and 16 archers. The Cataphract cavalry are, not surprisingly, fully armoured on barded horses, with the detailing of the horse armour being particularly nice. The armoured horse has six on half barded horses and a further six with armour but no horse barding. All the cavalry carry the distinctive oval shaped large shield, which is cast with a central boss but is otherwise flat, which will make it easier to paint your own design or perhaps to receive shield transfers. The six armoured cavalry with half barding are all carrying spears that are slightly wobbly, following the line of the riders body rather than going straight up. One of the features of ultracast is that if you bend it, it will spring back to its original position, and so with these I found it very difficult to straighten out the spears. The armoured infantry are very nice, cast in chainmail with oval shields and carrying a variety of weapons, including gladius, spears and darts. It was particularly pleasing to see the addition on an officer, musician and standard bearer for both the armoured and unarmoured infantry, one with a “draco” standard and the other with an eagle. The infantry are posed in a number of dynamic fighting positions, including some crouching with their shield in front of them, allowing the potential to model a “shieldwall” should you be so inclined.

Also included for review were two “booster” packs, one containing 32 Gothic infantry and the other 16 Gothic armoured cavalry. These pack maintain the quality of the miniatures in the boxed sets but allow you to buy a few extra, either to grow your army or to allow you to choose different options from the army lists.

There is a bit of “flash” on some of the miniatures that you will have to cut with a sharp knife or scissors, as the ultracast resin is quite tough, and there are some mould lines showing, especially on the infantry. However, these are minor complaints when balanced against what you get for your money. I really like what PSC are trying to do here. Having all you need for a complete MeG army in one box makes the game, and wargaming in general, more easily accessible for those who are just getting started in the hobby, or for the more experienced amongst us who just want to try a game of MeG. For a relatively small outlay you get everything you need to get you started and these boxed sets certainly show the potential of Ultracast as a moulding agent. Maybe one day this will be how all our miniatures are made?