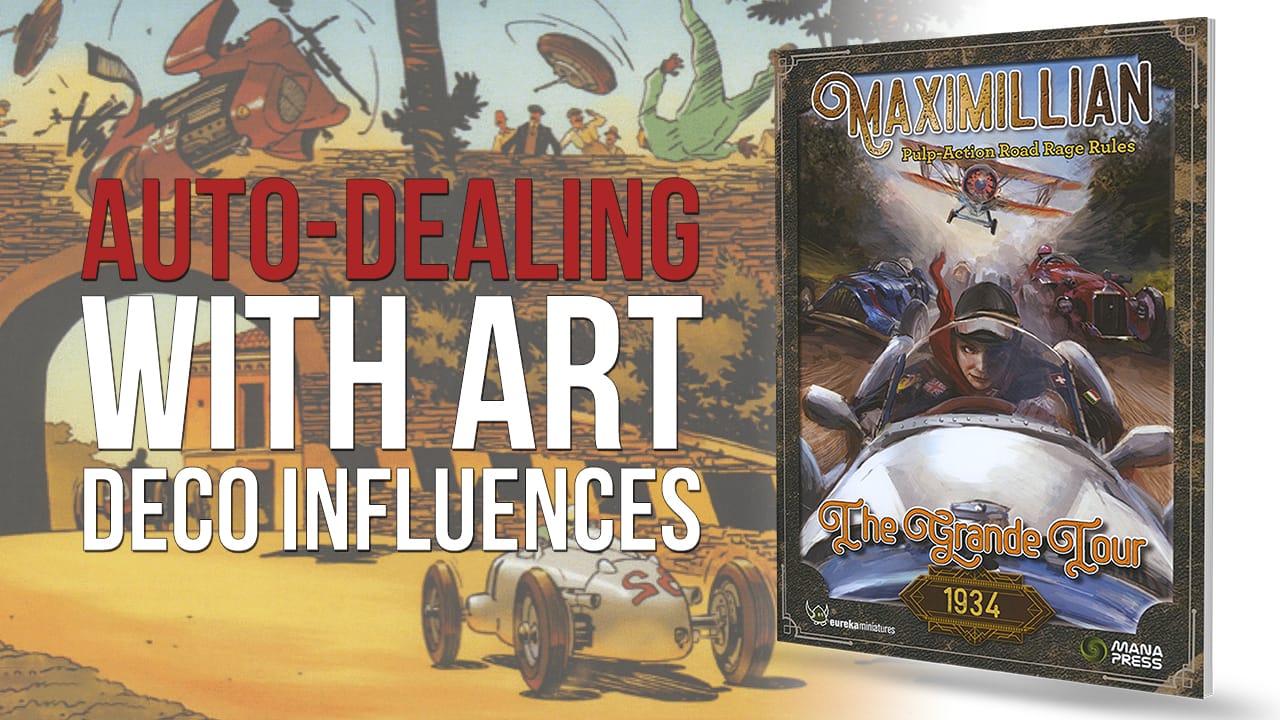 Maximillian 1934 is a set of vehicle racing rules with a difference: players create a vehicle using a design system, adding weapons, armour and engine enhancements before taking part in auto-duelling races full of the screech of tyres and chatter of machine guns. The Maximillian 1934: The Grande Tour book is the first supplement for the game, adding new rules, vehicle options and a campaign system to be used for games set in slightly different version of 1930’s Europe. A 53-page, full colour softback book, this is as much a piece of visual art as it is a rules supplement.

The book begins with an insight into the background of this version of the 1930’s. This is a Europe where the Great War and Spanish Flu outbreak were far more devastating even than the reality. The original rulebook offered a number of options, but this one is more an individual setting, The first section outlines new rules, all optional or specific to the background setting.  Rules include motorcycle hand-carried weapons, armed and dangerous pedestrians, a new class of land vehicle in the form of the Monowheel, half-tracks and examples of converted vehicles, rocket boosters, spar torpedoes wheel scythes and even guard dogs.

The next few sections cover new options for the game, the largest being Aircraft, from the standard biplanes and monoplanes to gyrocopters. Full rules are included for designing and using aircraft, and arming them, complete with the new record cards. Given the nature of European weather, this is covered in some detail. Next are rules for the effects of Local Conditions, a catch-all term for incidents that occur during a race, including the potential impact of spectators, snipers, wandering animals and non-racers wandering onto the track.

A campaign system comes next, allowing players to put together their own racing team, complete with sponsors, handicaps, pre- and post-race events and the ability to progress your crews over time.

Next comes a set of background information for this particular setting, complete with information on the countries which host the different races in Europe which comprise the 1930’s auto-duelling world’s ‘Grande Tour’. For each nation, there is a playable scenario for each track mentioned, with maps and all other information.

One of the original auto-duelling rules systems from a few years ago, Maximillian 1934 always had more style than the rest, what with its 1930’s-era focus and a penchant for the use of 1/43rd diecast conversions of classic cars rather than children’s toys. The new Grande Tour supplement adds a distinct, adventure-fuelled Pulp-tastic background history for a Europe that could have been and adds a host of new options to gamers. A great set of rules, plenty of interesting artwork and photographs of converted vehicles, and set in a time of real racing by brave men and women, this is a well-written supplement with some great ideas.