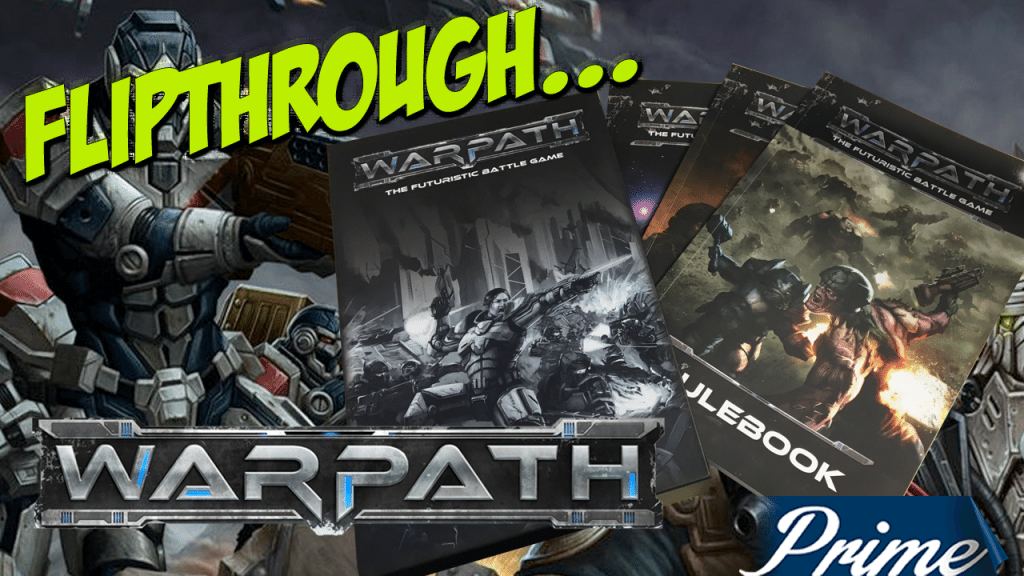 The latest set of sci-fi battle rules from Mantic Games, Warpath is fairly unique as you get two sets of rules and a sourcebook, all in separate rulebooks. Let’s take a look inside each one and see what we can find.

The first book contains the mass battle version, allowing gamers to field varied forces consisting of infantry, support and vehicle elements. The Core Concepts section of the rules looks at Units and Teams, plus the use of Positioning in the game. It also covers how to use dice in the game, both standard D6 and the special Command Dice. Lastly, this section looks at the uses of Line of Sight.

The Playing the Game section covers Setting Up, Missions, Primary and Secondary Objectives and fully described and detailed sample missions. The Sequence of Play is explained very well on page 36, and the rules explore the main Actions that can be preformed in the game, be it Move, Shoot or Assault. One interesting aspect of the rules is Suppression on page 49, and the use of the various types of Vehicles can be found on page 54. Lastly, the use of the special Command dice is outlined on page 67.

Much of the rest of the book outlines the six main Forces within the context of the game, the Asterians, Enforcers, Forge Fathers, the GCPS, the Plague and the Veer-myn. Also included is information on the Marauders, a former client state of the GCPs who rebelled. All the organization charts, points costs, special rules and force options for each force are covered.

The second rulebook is Warpath: Firefight, the skirmish level game set within the same universe. Rather than focusing upon large battles and formations of troops, these rules looks at the small squads and individuals, adding a more detailed experience to games. The rules follow a similar layout to the Battle system (use the same page numbers as above!) but focuses in on the smaller scale nature of skirmishing. Many of the core concepts and actions are the same but mission objectives and results are different. In some ways, this could be said to be a suitable ‘entrance level’ version of the battle rules, allowing those with only a small amount of figures to acquire enough knowledge of the rules before they fully commit to the swirling chaos of the larger battlefield. The Forces pages offer a scaled down version of the main rulebook, but still provides enough options and insights to field variants upon any of the seven forces on offer. In essence, the same level of choice is here.

The final book in the trio is the Warpath: Sourcebook. This isn’t a rulebook, but instead an in-depth guide to the Warpath universe, charting the growth of the main factions in the game, the history of the gaming universe and a wealth of other details. As with the other books, there are copious amounts of full colour artwork and photographs of models from the range. As an attempt to create the fictional future on offer from Mantic Games, it is an excellent example of what can be achieved when one is able to call upon the services of such imaginative people.

Overall, this is great package of books from Mantic, supporting the gamer with pretty much all they will need to take part in sci-fi games set within a believable but still fun gaming universe. The level of support from the company and the examples of the miniatures available suggests that this could be a good game for those that like their future grim but not too dark, and not so divorced from now to make it too alien or weird. Plus, Mantic are releasing the rulebooks in preparation for a forthcoming global campaign during Summer 2017, so why not invest now and be part of a growing community?