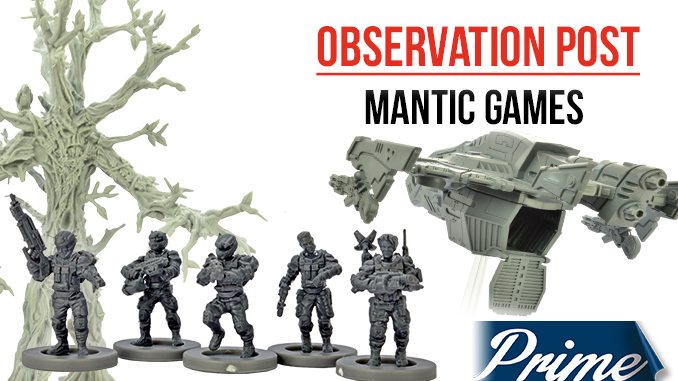 Mantic Games are prolific with releases connected to their core game systems. Recently, they have released new factions and support elements for the Warpath sci-fi game and characters for their Kings of War fantasy battle game.

The new GCPS or Galactic Co-Prosperity Sphere is one of the factions to emerge in the Warpath universe. One of the latest releases is frames of hard plastic, multipose infantry. Each frame consists of a series of torsos, with a wide variety of head, weapon and equipment options. These are rapid assembly figures, although, with so many options, it could be difficult to decide! It is possible to create command, comms and support weapon miniatures from this one frame, ready to engage with their enemies.

The next item is a plastic kit of a support vehicle for the Enforcer faction, a flyer that can move around the battlefield, ignoring terrain and bringing fire support where it is needed. There are two build options, one called the Accuser Interceptor with twin heavy lasers and a troop compartment (pictured) and the other the Persecutor Bomber with missile pods, an anti-personnel weapon and bunker buster bombs. Again, this kit is easy to assemble and looks good on the tabletop.

Moving on to Kings of War, the fantasy battle rules, we have two characters, Eckter the Placoderm Defender, a special character of the forces of Nature. This is an obviously aquatic creature, similar to a lizard or salamander, and is cast in resin. The figure is in a suitably dynamic pose, wielding a spear.

The other character is Magnilde, a Varangur Demon Hunter with a whip and a wicked looking blade. She is clad in fur lined clothing and boots, implying she works amongst the cold regions of the realm. Again, she is cast in resin.

Both miniatures have a sense of character and could be used with not only the Kings of War rules but others to boot.

The last miniature is Tree Herder, a large resin cast treeman or Ent with a wealth of detail. There are some nice touches, including a crow and a nest amongst the branches. The miniature cries out for the use of a suitable undercoat and washes. The miniature conveys a sense of great age, but also strength.

These and a host of other miniatures are available from the Mantic webstore or your local stockiest. All the miniatures may be suitable for other rulesets and can be considered fairly generic. However, Mantic cover all aspects of their own sci-fi and fantasy universes in a range of products that are worth checking out.