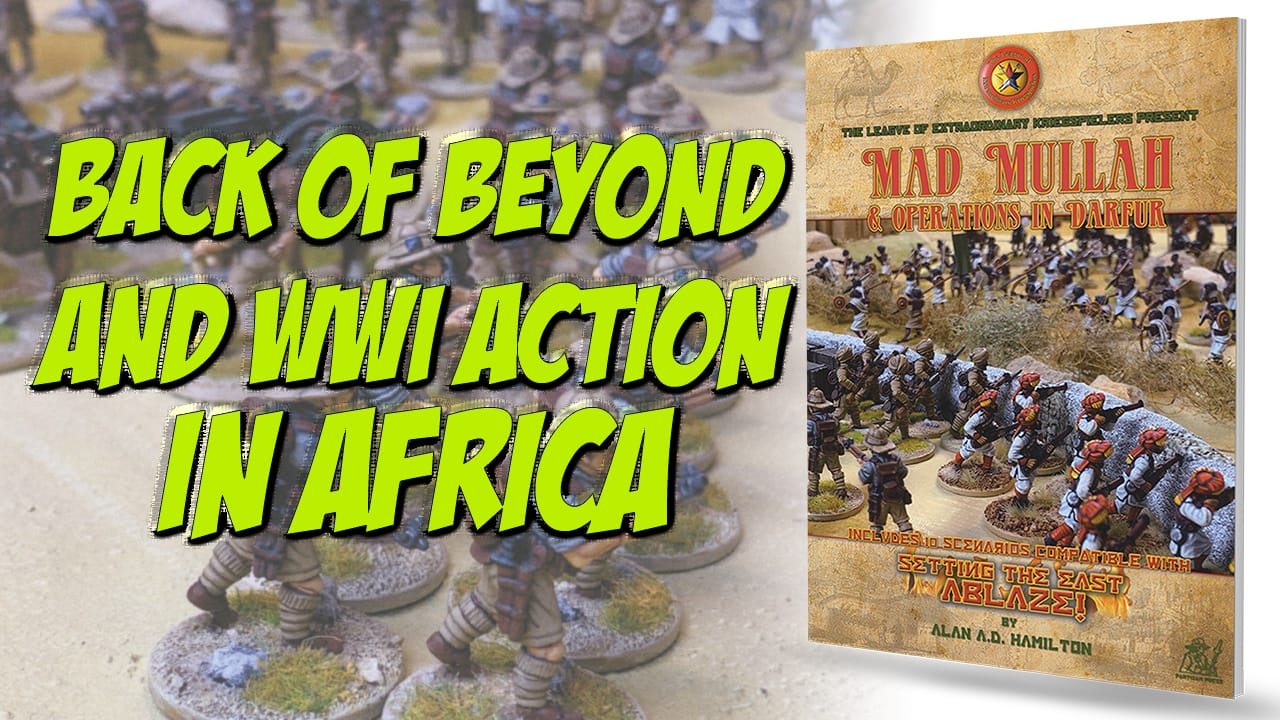 The Mad Mullah & Operations in Darfur book the latest in a series of supplelemnts for the excellent Setting The East Ablaze rules system from Partizan Press. It is a 80-page softback book which contains a wealth of history, scenarios, army lists and more for two of the most obscure but fascinating campaigns of the early 20th Century.

The book outlines the history behind the five expeditions launched from 1901 up until 1920 to defeat the forces of the ‘Mad’ Mullah, who was neither Mad nor a Mullah, who sought to lead various tribes of Dervishes and others in a quest to oust the ‘Infidel’ British from Somaliland (modern day Somalia) and create an Islamic state. Along the way, the author uses brief sidebars to show the numbers of troops involved, and the use of some excellent photographs of 28mm figures really enhances the narrative. British and Indian Infantry, African troops, Dervish tribesmen, the Royal Navy, camels, Maxims and spears and shields all feature in a struggle which lasts right until just after World War One.

The book is designed with gamers in mind – consequently, there is a useful section on the organization of the Fifth Expedition which actually also discusses the troop types, uniforms and set up of some of the earlier ones as well. The author outlines how to create the armies using 20mm / 1/72nd plastics, but almost all the photographs show Copplestone Castings or Perry Miniatures plastic 28mm figures, so it’s easy to see just how well either size works within the setting.

There are some useful Scenario Guidelines before each of the 8 Somaliland scenarios are outlined. This is done very well, using only two pages per scenario and some excellent maps from Nick Buxey. Each scenario is easy to access and convert to the tabletop. The range of scenarios moves from the type of early or generic clashes to those during the Great War period, adding in aircraft as time goes on.

In Part Two of the book, the author offers a similar approach to the Darfur Campaign of 1916, with Southern Sudan tribesmen taking on British and Imperial troops in a war which also saw spears versus aircraft. History, notes on the forces involved and the 20mm plastic option are outlined, along with images of 28mm figures, model aircraft and 2 scenarios, again with great maps and a nice approach to using the information offered.

For those keen to have army lists, included towards the back of the book are ‘sensible’ army lists for use with the Setting The East Ablaze rules. The word ‘sensible’ reflects the fact that these army lists take the actual number of troops involved in the battles and make them suitable for tabletop use – the ultimate aim of an army list should be to make a game playable by the average wargamer, not bankrupt the gamer by expecting them to buy a mountain of miniatures!

This is a great book, a really useful supplement and has just enough history to provide an access point to a whole forgotten part of history. The exploration of the forces, scenarios and the excellent photographs taken by Steve Langan of his own miniatures collection combine to make this a worthwhile purchase for anyone who likes this period or just likes looking at top quality toys! There are some occasional small editing mistakes but none which make the text unreadable or any the less interesting. A very well produced and thought out publication, with plenty of uses.