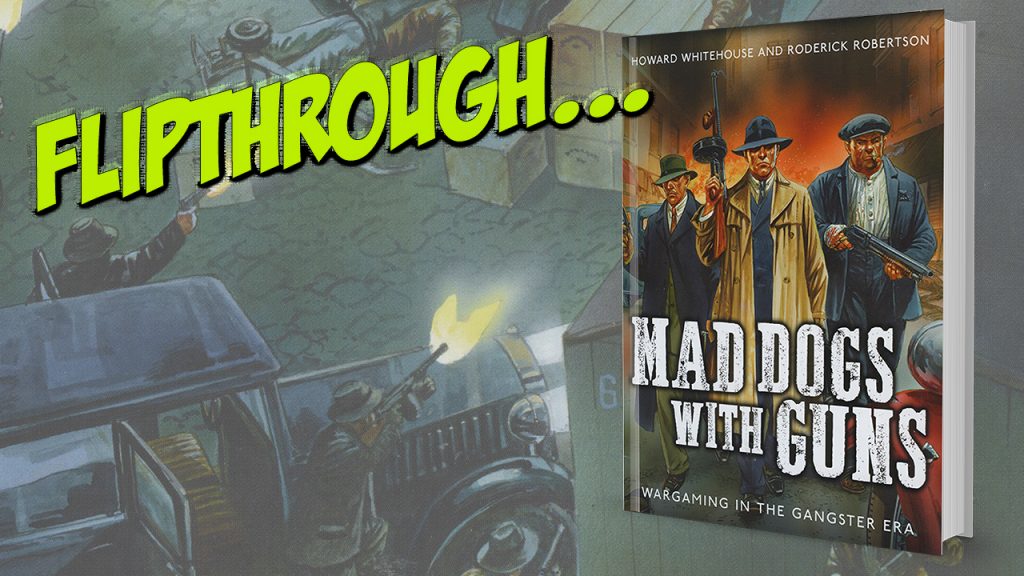 The latest set of rules from Osprey Games covers the US Prohibition Era of the 1920’s and 1930’s. Mad Dogs With Guns allows you to re-create the efforts of greedy gangsters and upright law enforcers during a time of violent opportunism.

The book plunges straight into the key concepts and rules, adding ‘flavour’ by the use of narrative fiction in the style of newspaper cuttings. The basic stats used in the game are discussed, as is the use of playing cards to govern actions.

The book then takes you through the rules for LEGGING IT or movement, GATS or shooting and FISTS or close combat. You also get to learn more about the GUTS stat, which works like morale.

The Screaming Wheels! section provides rules for introducing vehicles into the game, including the inevitable shooting at or from cars. Along the way, you get more narrative, plus some great artwork by Peter Dennis and photographs of fantastic miniatures ‘in action’.

The book then takes you through setting up your first game, types of gang and their composition, plus how to create your gang; using three different but simple methods, and adding skills, weapons and more.

There are eleven sample scenarios included in the game, with suitable notes and plenty of twists. In addition, there is a simple but effective campaign system, allowing players to take their gang through a whole story arc, as fortunes rise and fall.

In amongst the campaign system are some period or setting specific rules, including bribery of public officials and what you can expect in return, the effect of Public Outrage at your activities, the Consequences of Crime when caught, and the various different Rackets that can be used to generate income. Sample character profiles and a comprehensive reference sheet complete the book.

This appears to be a characterful and easy to learn set of rules. Every effort is made to capture the spirit of this era of American history, with a generous helping of Hollywood to add extra flavour. Everything is clearly laid out and easy to reference, and the touches of narrative, artwork and copious photographs of miniatures makes this a game for anyone looking to bring their own group of gangsters to the tabletop.