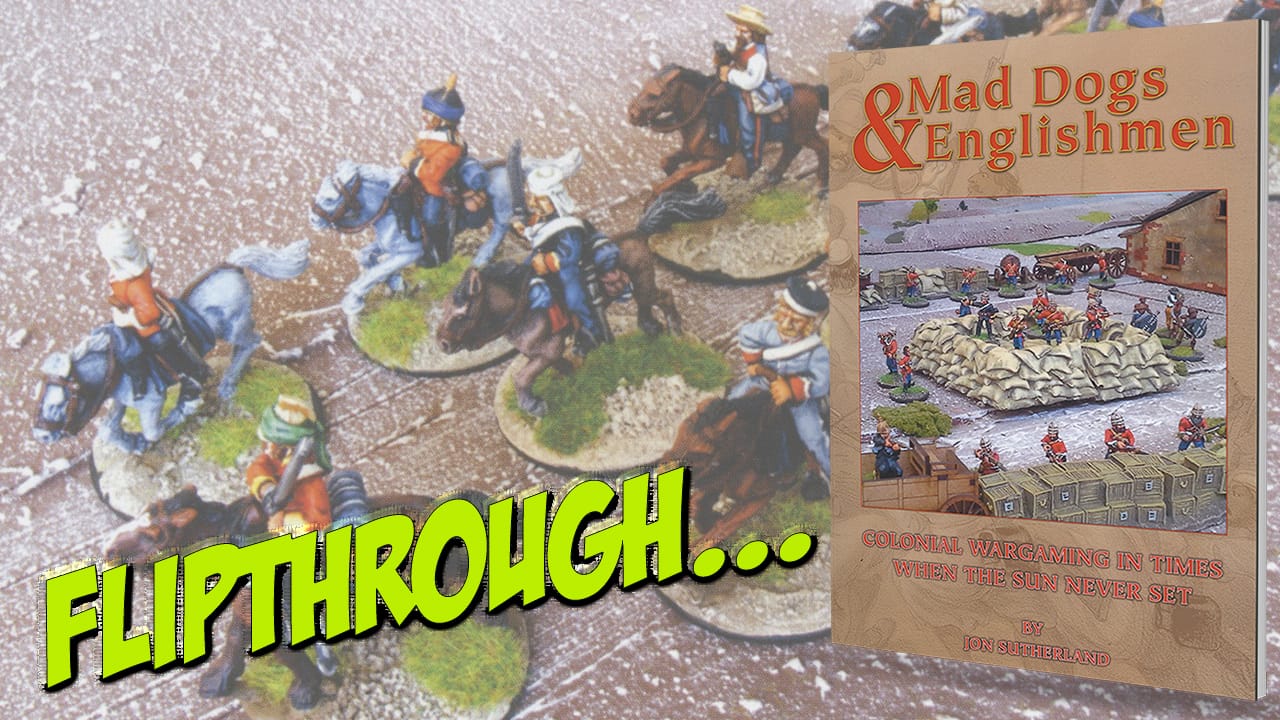 Based upon a tried and tested set of rules formulated during his tenure at the Wargames Holiday Centre, Jon Sutherland’s Mad Dogs & Englishmen offers colonial wargaming on a large-scale skirmish level. In fact, games may be played with anything from a 100 figures all the way up to 3,000!

The rulebook begins with an overview of the methodology behind the game and offers some useful advice on how to balance your colonial games. The rules cater for five or six units of 10 or more figures a side, or all the way up to 30 to 40 units with 10 to 30 figures per side. The actual rules are as simple as possible and laid out in an easy to read style. They were designed for use by those who may not have English as their main language, which has obvious benefits for all.

To aid with this understanding, most of the main rules, such as Movement, Firing and Close Combat, are laid out in tables and charts. The actual rules are remarkably simple, making use of D6 or D10 rolls to resolve most parts of the turn sequence. Each Hit caused by weapons can result in either Kills or Terror results, with Terror having an impact on the Morale of a unit as much as deaths and wounds. Everything is designed with the minimum of dice rolling in mind, enabling the control of large numbers of figures.

The abilities of each Commander are randomly rolled for and have an effect upon their overall battlefield performance. Each Commander has a card, which, when drawn from a deck of Commander’s cards, helps to randomize the movement and actions performed by each unit. There are also Special Cards, which may be allocated to a unit before a turn starts, which are replaced in a senior Commander’s deck under certain circumstances. Terrain and its in-game affects are clearly defined, leaving little room for mis-interpretation.

Also included are eight variant Army Lists, covering The Indian Mutiny, the original conflict the rules were designed for, plus the Northwest Frontier, Southern, West and North East Africa, China, the American West and the so-called ‘Darkest Africa’. Each list offers some generic thoughts on the history and the warriors of the area defined according to the rules. The rulebook contains photocopiable versions of the Commander and Special Cards, with suggested numbers per deck, and a useful quick reference sheet.

This set of rules is suitably simple and seems to be able to cope with any number of players from two to 12 or more. They would make for a fast play set for convention or participation games, a club night or a weekend’s campaigning. As an opportunity to field large numbers of figures on a suitably impressive table, this is a well-written set of rules with plenty of fast play and inclusion for every gamer.