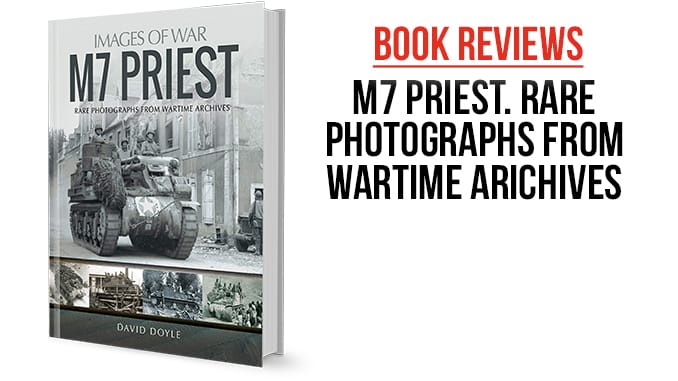 The books of Pen & Sword´s well-known series “Images of War” can be divided into two different groups. Books of the first group cover a particular battle, period or theatre. They are intended as a primer on the subject based on a plethora of mostly unpublished photographs and maps. Books of the second group take an in depth look at single military vehicle. David Doyle´s book “M7 Priest” is a typical representative the second group of books. Carefully researched, the book covers the development, the variants and the service history of the 105 mm Howitzer Motor Carriage M7, commonly known as the M7 Priest.

The M7 Priest was an American self-propelled artillery vehicle first produced in April 1942 War II. The British Army christened the vehicle Priest due to its pulpit-like machine gun ring, following on from the contemporary Bishop and Deacon self-propelled guns. It had a long and distinguished service history. Some vehicles were even used until the early 1960, by the West German Bundeswehr. David Doyle´s book traces back the different development stages of the M7, points out differences between vehicle variants and gives examples of its field use. Also, general data on the production of the M7 is provided as well as technical specifications.

The 142-page softcover book under review here contains numerous pictures with informative captions, some of them in colour. It covers every conceivable aspect of the M7 Priest. Being a “rivet-counter” myself and coincidentally working on my own 28mm M7 right now, I consider the book useful for wargamers and scale modellers alike. The book is not only a well-researched source of inspiration for vignettes or dioramas, it also provides food for thought considering conversions and vehicle customizations.