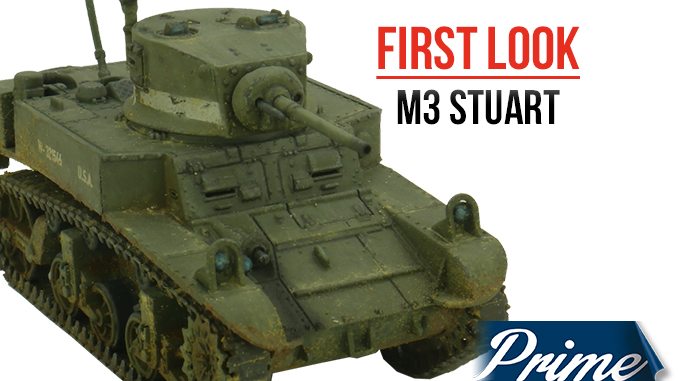 Released in the next couple of weeks, this is a single vehicle boxed set of the M3 Stuart tank from Warlord Games. Having previously offered this kit as a platoon deal, this may be one tank but has enough parts to be constructed in a number of ways.

This versatile light tank, nicknamed the ‘Honey’ due to its smooth ride, saw service in a number of variants and with all the main Allied powers in World War Two. The box contains parts to add sand guards for use in the desert war, a flamethrower and external fuel tanks for use in the Pacific, rounded or plate turret versions and five medium machine guns to add that extra level of anti-personnel firepower!

Serving from 1940 to 1943, the M3 tank excelled as a reconnaissance vehicle but was also used as a command vehicle and troop transport, being fielded without a turret. Being a light design, this small but mighty tank saw service even amongst the jungles of the Pacific, able to engage the Japanese troops who had very little to stop it with.

Versatile and widely used, this is a welcome addition to the arsenal of any World War Two gamer, with plenty of options to really let the modeller go to town on it.