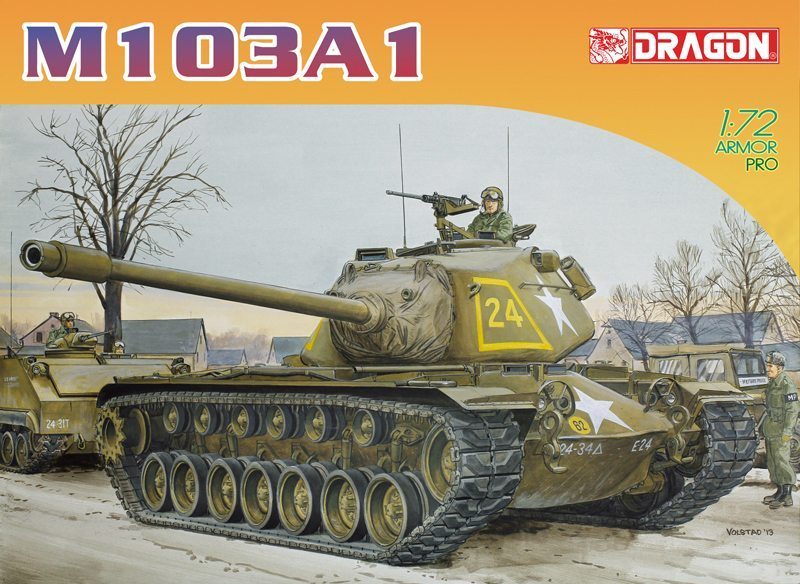 In 1950’s, the emergence of Soviet heavy tanks such as the JS-3 and the later T-10 came as an unpleasant surprise to NATO forces. Mounting 122mm guns and protected by heavy armour, they made the standard American tanks, such as the M48, look distinctly average. The answer was the M103 heavy tank. This was essentially an enlarged M48, with thicker armour and carrying a 120mm gun. Unfortunately, it was also slow and unwieldy. Only 300 were built and, while some were deployed in Europe, the development of anti-tank missiles and more efficient guns soon rendered them obsolete.

The kit comes in light grey plastic and is well moulded, with hardly any flash in evidence. By comparison with other releases in the Armor Pro series, the M103 seems to be more suited to the gamer than the specialist modeller. Much of the detail, such as tools and stowage boxes, is moulded onto the hull parts. Markings are provided for three examples, based in West Germany in 1959

Pros: The kit does not have separate tracks; instead, each track assembly comes in two parts, track and road wheels are moulded together, with only the drive sprockets being separate. All of the hatches are moulded in the closed position. As I use model tanks for gaming, I don’t mind this approach as it makes the model a little more robust.

Cons: Although assembly is very straightforward, the main gun appears to be a little too short.

Scope: There has been a recent upsurge of interest in Cold War gaming, with the release of games such as Team Yankee and Third Generation Warfare, and while there are a lot of kits out there for the 20mm gamer, early Cold War models are not all that common, so this is a particularly welcome release. The finished model will be a distinctive and unusual addition to the wargames table.