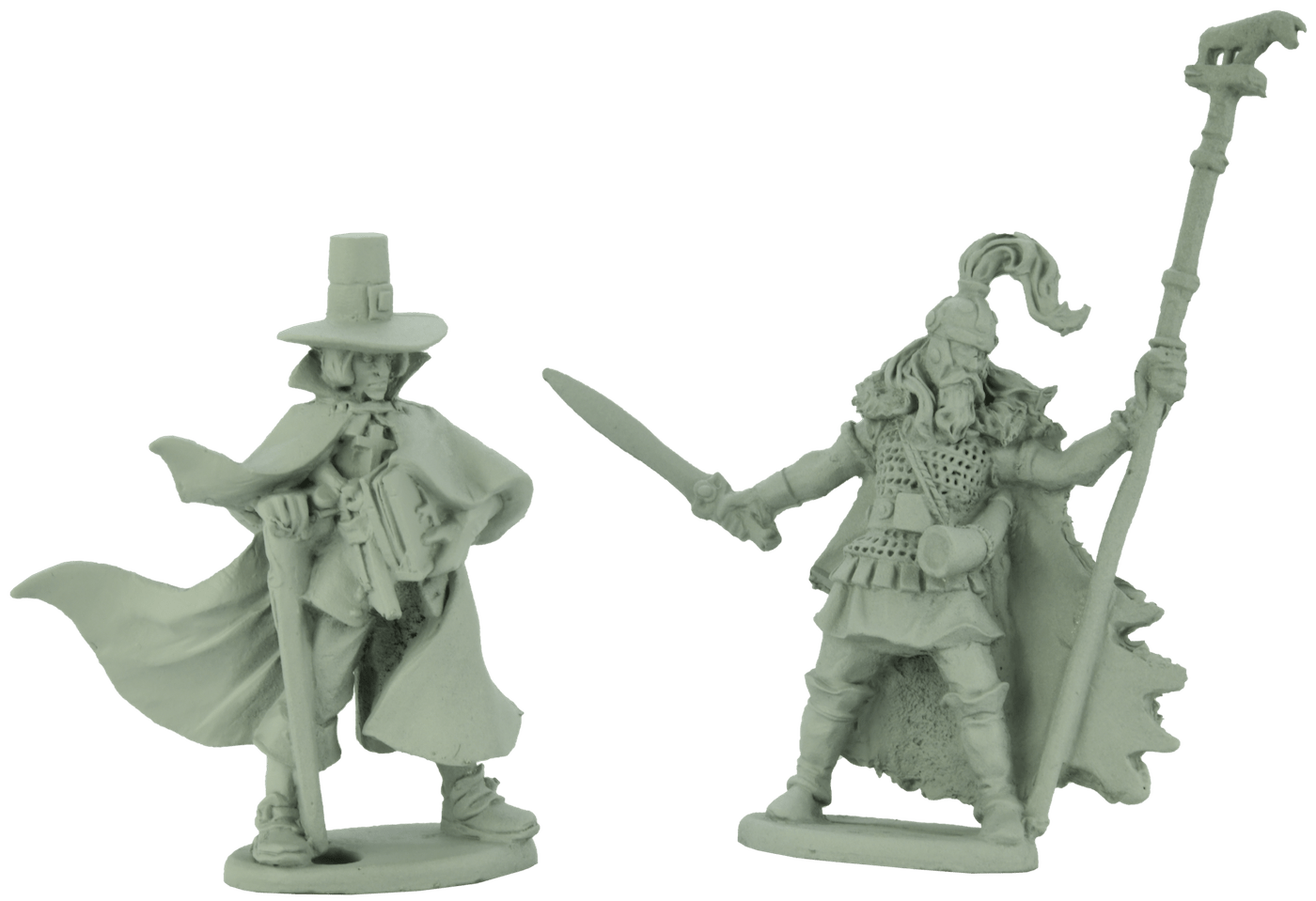 We nipped into Lucid Eye Publications earlier this week and, after distracting them with niceties and small talk, snagged a baggie of their latest metal miniatures. It’s an eclectic group, which seems fitting when you peek at the sheer number of ranges and styles sculptor Steve Saleh creates. They’re described as 28mm, but most are closer to 32mm.

First, we have Witch Finder II; if you want to severely limit your child’s future career path, you couldn’t possibly pick a better name! We imagine the tragic story of little Witch Finder II, his dreams of becoming a zookeeper shattered as the hunting and persecuting of witches unavoidably creeps into his life.

As a part of the Blades & Souls range the intent is that this model can be used in various RPG and gaming situations; it’s a great single-piece miniature that screams out “paint me!” It oozes atmosphere with its billowing cloak, strong silhouette, and flavourful details. We particularly like the chunky cross, book, and (very in this season) iconic capotain hat.

Next out of the lucky dip is The Wolf Mother, from Lucid Eye’s pulp skirmish game The Savage Core. This is another solid sculpt, another strong silhouette, and another case of parents who put too little thought into their child’s name… but that joke’s long run its course.

Clothes are a rare commodity in The Savage Core’s primal land, but the sculpt shows a level of restraint that stops it falling into the realm of cheesecake and fits with the background. The contrast between the rough furs and smooth skin should make for an enjoyable painting experience.

We don’t know a whole lot about the Treasures from The Cosmic Vault range, with only Uriel and Uriel II (who is the third from our grab bag) made so far. A hero of Titan, it seems that the model is designed to embody as many pulp tropes as possible – classic sci-fi armour, billowing cloak, sword aloft, foot on rock, and a barely dressed submissive girl at his feet.

Not so much to this reviewer’s tastes, but still a solid sculpt and unlike the other miniatures it comes in three parts – Uriel, the Sister of The Blossom, and a scenic base. This is a tall model, 36mm to the eyeline, so very much at the extremely heroic end of the scale.

Wrapping things up is (take a deep breath) Gremingel Earl of The Vorlings with Gagnir’s Horn. Part of the Red Book of The Elf King range (a pre-history world that feels heavily Moorcock inspired, and has rules from Rick Priestley) this might be the best of the bunch.

Steve’s models feel like something of a hybrid – a touch of the old-school, some retro styling, classical and historical influences, but with the crispness and anatomical rigor prevalent in more recent miniatures. This is very evident in Gremingel, whose armour and weapons are sharp and detailed, but in a model that feels like a delightful throwback and tribute to classic minis of times long gone.