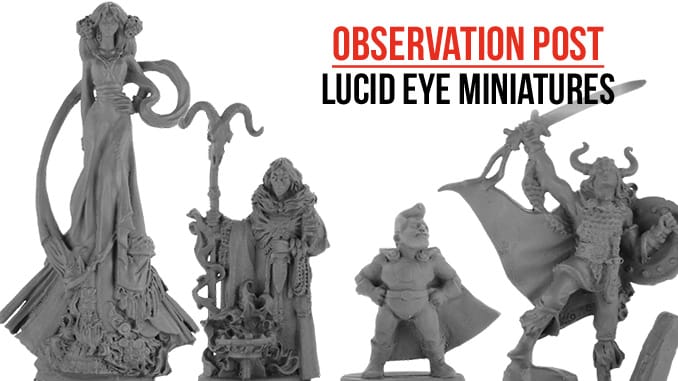 Lucid Miniatures have added more and more metal miniatures to their ranges. However, they have recently taken two routes that show their eclectic approach to the hobby, working with a famous artist and creating a realm of adventure more akin to the world of Saturday morning TV.

Working with Jim Fitzpatrick, an Irish artist best known for elaborately detailed work inspired by the Irish Celtic tradition, Lucid Eye sculptor Steve Saleh has been creating a range of limited edition collectible miniatures. Based upon key characters from Irish mythology, these figures fit quite well into the concepts behind the Red Book of the Elf King setting. The figures accurately reflect the intricately detailed nature of the artwork, creating faithful 3D versions.

At the other end of the spectrum, Lucid Eye has another new concept of their own. Seemingly based upon the world of children’s cartoons, the aptly named ‘Toon Realms’ range consists of the fantasy world of Toon Realms, the heroic world of Super Toons and the scary world of the Toon Terrors. These are caricatures of classic archetypes, like much of the output of children’s TV shows and certain types of computer games. The Toon Realms have a number of characters, plus more generic followers, whilst there are currently two Super Toons, Toonman and Captain Ace. The Toon Terrors sub-range has the Shallow Ones, sea living creatures from the Shallows who emerge to scare.

These are two very different ranges, one a high art project, the other akin to the mass media that children are subjected to. The sculpting style is equally at odds, with the meticulous attention to detail of the Fitzpatrick collection and the more simplistic style of the Toons. Both ranges have their place, although I’d personally like to see many more sculpts for the Plot Device range.