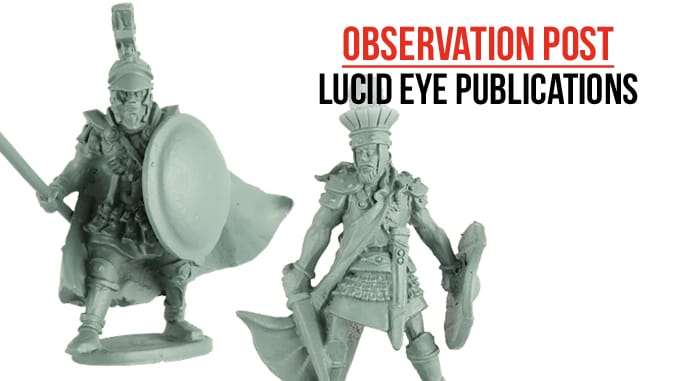 Lucid Eye Publications has so many unique figure ranges, some lying moribund, others being expanded at a fair rate of knots. One of the most recent ranges of interest is the pseudo-historical Ziggurat, which combines elements of the ancient era with the mythology of the age of Atlantis to create something both different and familiar at the same time.

In contrast to the noble look of the Greco-inspired warriors mentioned above, The Sea Peoples I pack figures are very different, more akin to the late Egyptian era or similar. Armed with swords and supplied with separate shields, these figures are again clad in a variety of different armour styles with similar ‘kilts’ and headgear. One of the figures is obviously female, with stylized metal or leather armour, whilst another sports a beard and is bare chested.

To complement these warriors from two different factions, the range includes a number of single figures that act as named personalities or leader / hero miniatures.

For the ‘Greeks’, we have the Wings of Thanatos, a determined looking figure with spear and shield, again in armour inspired by classical-era Greek states. This is a larger figure than the first pack, and wears a flowing cloak. The more Egyptian styled peoples have The Sea People King, a majestic looking warrior with sword and shield, with a half-cloak cinched across his body.

These are exceptionally detailed sculpts, which you would expect from a master sculptor like Steve Saleh. Other figures in the range are in a similar vein, and also includes a number of packs of Amazon warriors in Greek-style armour, plus other characters. They would fit with any rules which embrace the mythology of the Ancient world or form the core of a fantasy-themed army.

Oh, and Lucid Eye continues to expand, adding not only new metal cast figures but also their new ‘Ghost’ range. These are versions of their metal figures re-produced in a top quality hard plastic, which is white in appearance, hence the ghost moniker. This allows for the same figure to be produced at a cheaper price.