Logistics in the Falklands War, a case study in expeditionary warfare 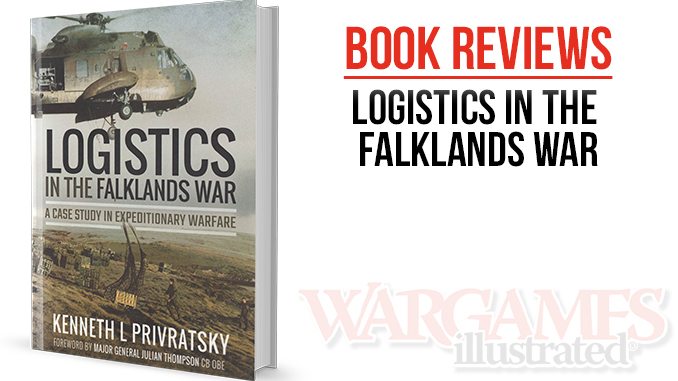 Logistics in the Falklands War, a case study in expeditionary warfare
Kenneth L Privratsky
Pen and Sword, 2014 and 2017
Reviewed by Jim Graham

The old saw states that “amateurs talk tactics, professionals talk logistics” and Logistics in the Falklands War sets out to prove that just. At 280 pages. including notes and index. it is not a daunting book but it is certainly comprehensive. The author was a General in the US Army, specialising in logistics and took the Falklands War as his staff college case study, which was later expanded into this book. The bulk of a staff officer’s work has always been concerned with the troops having boots on their feet, food in their stomachs, and ammunition in their weapons, and Logistics in the Falklands War examines how that was done at a distance of 8,000 miles from home in an inhospitable environment with a supply time from the home depots which could sometimes be measured in weeks.

Privratsky covers the build up to the war in brief, but mainly to point out that the British Army was geared to fighting in Northern Europe with long established supply chains and BAOR and NATO bases close at hand. The Royal Navy was expected to find and destroy Soviet subs rather than engage in sea battles with other navies, or face relentless air attacks and it found itself doing just that, at the limit of its range with no ports, friendly or otherwise, to fall back on. The war itself is not covered in detail, only enough is given to set the scene for the main thrust of the book, the solving (or not) of logistical problems and the different emphasis of the fighting commanders and logistics specialists, and how the lack of inclusion of the latter in the former’s plans lead to delays and confusion. The author is very even-handed when it comes to how the decisions were reached and at no point does he criticise any commander who acted in good faith and using the best information available. He does explain at lot of things that have never made sense to me, as someone who lived through the war and has read a book or two on the subject. Privratsky’s focus is quite tightly on the things that other writers pass over in a sentence or ignore completely. At times the book is a love letter to the Commando Logistic Regiment, which was the main logistic element of the land forces, and is claimed to be unique at the time of being multi-service and multi-function. It is also the only unit in a book full of abbreviations and acronyms that is always written out in full whereas often paragraphs contain passages like “greater quantities of stocks in the LLA further out in the TEZ.”

The one criticism I have, and it really is a very small one, is that there is a glossary which includes the BBC, the RAF and NASA but not terms like “outload” and “non-tactical outload”. While I think it is clear from the text what they mean I would rather the author had explained. That said this is a fascinating book for those with an interest in warfare in general and logistics in particular, and should be of great interest to wargamers who should perhaps query why most rules give little thought to whether troops and supplies should be actually on-table or not. It might also help explain to any veteran who was stuck in a wet hole in the ground in East Falkland exactly why nothing useful was reaching them. I would recommend this book to anyone with an interest in modern warfare, and it is not nearly as dry a read as I may have made it sound.