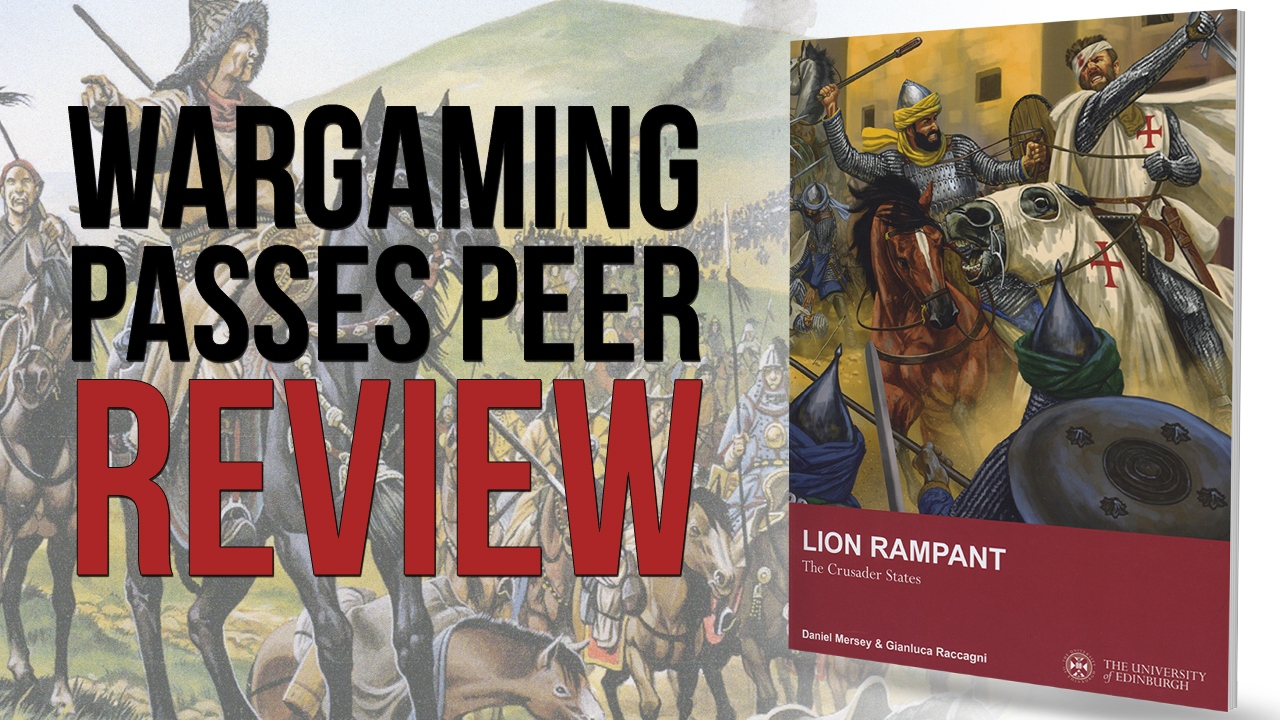 We’re taking a look at a new Lion Rampant book, in the instantly recognisable blue gaming book cover of Osprey Games … wait … no … What devilry is this red cover? … and from the University of Edinburgh? Have we entered another reality? Has 2020 decided to throw a dimension hopping twist into its already sorry tale of woe?

Well, no, there’s a far less extreme but still rather interesting explanation! As co-author and original Lion Rampant scribe Daniel Mersey says in his foreword “Lion Rampant: The Crusader States returns to the subject matter and covers it with far greater knowledge and insight than I ever could have myself.”

And that insight and knowledge is down to Gianluca Raccagni. He’s a lecturer in Medieval History at the University of Edinburgh, the other author of this supplement, and the driving force behind his university’s History and Games Lab, a project that started from this Lion Rampant collaboration.

Gianluca talks about this in his introduction and in his Designer’s Notes in Wargames Illustrated 395 before diving into a book that mixes historical accuracy with Lion Rampant gaming and is somehow dense but unintimidating all at once.

This softcover, 156 page, full-colour expansion for Lion Rampant seems perfect for any players eager to bring accuracy to their gaming. It begins with a history of the Crusader states between 1097 and 1291, with in-depth written detail and a combination of art, painted miniatures, maps, and photographs of historical artefacts to illustrate it.

There’s an Essential Chronology of the period on page 24 before the gaming part of the book hits.

New Upgrades are listed between pages 26 and 36, and each upgrade begins with historical context before it is given a points cost and specific rules. We were instantly drawn to the section on Greek Fire and the various methods used to attack with this semi-legendary incendiary liquid.

On page 37 the book gets into its army lists proper; this is a detailed 50-page section that lists 12 different factions one might expect to encounter in and around the Crusader States of the twelfth and thirteenth centuries.

After a broad Troop Types table, the specific factions start out with Western Crusaders. There’s some Historical Background, followed by Special Characteristics (Upgrades, characters and special rules that may be used) and then that faction’s specific troop types are listed. Finally, there’s a suggested warband for you to take into battle.

We’d describe the book’s layout, especially the faction rules and tables, as functional rather than stunningly designed. The inclusion of art and historical pieces from the relevant periods does add to the overall visual interest of the book though, and makes the contents feel a lot more real and inspirational.

On page 44 are Italian Maritime Republics, who gain a free shooting activation due to the speciality crossbowmen of their naval warfare. Frankish Settlers are well-equipped but lack manpower, the Christian Military Orders have religious zeal and recklessness. All simple ways that flavour has been added to vary the gaming and ensure a level of historical accuracy.

Pilgrims are on page 57, Marauders next, Muslim Principalities, Fatimid Egypt on page 69, along with their poor morale and abundant resources – an interesting contrast.

There’s even a Scenarios Generator table to create a simple campaign, which is nice stuff. Boasts are included but replicate those from the core Lion Rampant rules.

The scenarios proper start on page 93 with the Siege of Antioch. It is given historical context and introduced in a way that mixes history and atmosphere, then for gaming purposes there’s a map, set up details, special rules and victory conditions.

It’s not all about straight up combat either. Feeding the Besiegers of Jerusalem puts Franks, Saracens and peasants in the same area, with a focus on ransacking hovels, grabbing a cart, or stealing from a flock of sheep.

Scenario 4 brings wild beasts into the mix, Scenario 7: Escape from Hattin, 1187 puts a focus on the importance of finding water to rehydrate the Franks, Scenario 9: Attack on a Crusader Village is made for four players. It’s a great mix of games that have been woven through a fabric of historical accuracy.

The final Scenario, starting on page 142, is the Last Assault of the Defenders of Acre (1291). This finishes up the period of the Crusader States, with the Fall of Acre generally considered its end. In this Scenario just part of a sally, made by the defenders of Acre, is represented.

The book ends with an appendix that transcribes a talk from author Daniel Mersey about Gaming with History, originally presented at the First Annual Walter Scott Roundtable on the Middle Ages and Popular Culture.

Lion Rampant: The Crusader States is a historically accurate extra for your games of Lion Rampant and will bring more flavour and history to your battles.

We’re intrigued to see what’s next in this collaboration between game makers and historians – this is a most promising start!