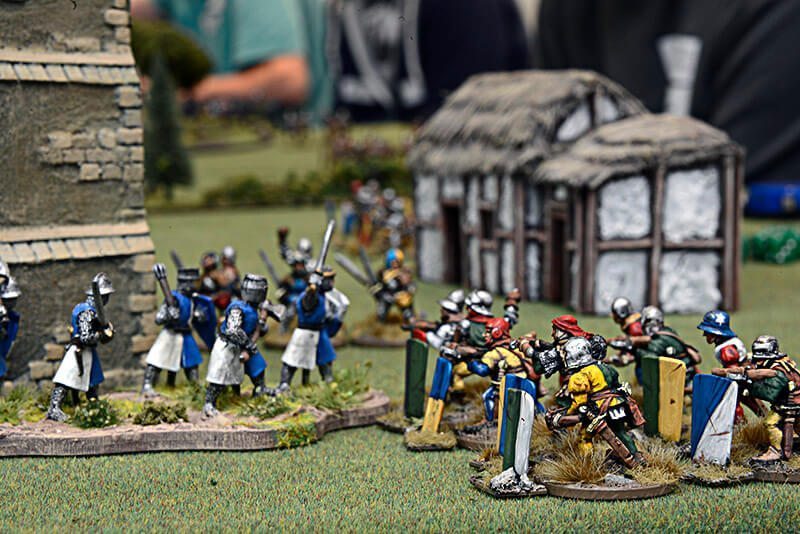 Wargames Illustrated Campaign Days are hosted every few months at WIHQ in Nottingham, England. Our 24 person capacity, carpeted, air conditioned and light gaming room is the venue for any number of different rule systems, but each day is played out using the same philosophy – we don’t do tournaments, we do fun campaigns.

There are no trophies for wining and individual scoring comes second to team or campaign play, and personal enjoyment.

As well as a full day of gaming goodness, included in the ticket price (£30 or £25 if you have been to an event before) are food, snacks, drinks, lunch-time entertainment, goodie-bags and prizes.

All of our Campaign Days are conducted in a casual no-rush atmosphere, in which we admittedly sacrifice cramming in extra games in favour of relaxed play.

The response to the five Campaign Days we have run so far has been overwhelmingly positive and we look forward to welcoming you as part of the WI Campaign Day Community in the future.

PART ONE – The King is dead, long live….

In an unspecified time during England’s medieval past, in a slightly alternate reality, King Geoffrey is dead. This cruel, flatulent, abuser of power and privilege has contrived to leave the country on the verge of chaos. With no legitimate heir to claim the throne, it is left to the old king’s myriad of bastard sons and daughters to take to the field of battle and fight for their right to wear the crown.

As the storm clouds gather over this green and pleasant fictional past, the players in our second Lion Rampant Campaign Day huddle around the tea and biscuits, sizing up their opponents, jostling for the cookies with the most generous covering of chocolate and generally psyching themselves up for the struggle ahead.

The tables are set and the figures are nestled in their various carry cases ready to be decanted into action. Over the course of the next seven hours each of the players at our latest campaign day will fight not only for individual honour (and prizes!) but they will become embroiled in the quest to place their prince or princess (AKA Bastard) on the throne of our fictional England.

The players have already been allocated a ‘House’ which they will be representing. There are nine houses, one each for the nine bastard challengers to the throne, with two players teamed-up to represent each house, and although on our map of England their battles will be miles apart (and in the gaming room they will be yards apart!), these teams of two will, at least initially, be on the same side. As they day progresses alliances will shift and some of the pretenders to the throne will be slain.

The day consists of three games, beginning shortly with ‘Bloodbath’ (the basic battle scenario from the rule book), followed (after a hearty beef stew lunch and a couple of ‘bar games’) by a specifically designed scenario intended to add a very different element of Lion Rampant game-play. Finally the battle for the throne will conclude with a multi-player ‘battle royal’ at which the War of the Nine Bastards will be concluded and the new king or queen will be crowned.

Stay tuned throughout the day to see the twists and turns in our latest Wargames Illustrated Campaign Day….

PART TWO – NEWS FROM THE FIELD OF BATTLE!

As the various Houses began their respective quests for dominance, the clash of steel, the twang of bow fire and the cries of the wounded resounded across the nation.

House Wagner took on forces from both House Senza and House Loscoe, winning both battles and ‘persuading’ the losers to join their forces.

House Dagmar moved their retinues south and east, taking on House Valiant and House Star. Again, their ability at arms was sufficient to overcome the enemies ranged against them, leading to new converts to the Dagmar cause.

House Rising decided to launch uncoordinated attacks against Senza and Valiant. As a consequence, the House Rising forces were defeated in the battle with Senza and victorious against Valiant. This was the Fall of the House of Valiant, with both Retinues being absorbed into the respective victor’s force.

A group of noble warriors led by Sir Nicholas Le Eyre sallied forth with brave hearts and proud banners to engage a force from House Loscoe under Earl Ray. They returned not with their shields but upon them, having been soundly trounced by the Earl’s forces and losing their handsomely visaged nobleman. Thus, House Star’s hopes of ruling the kingdom are now dashed and the remnants find themselves fighting for new masters.

So, after a series of real Bloodbath encounters, the contenders from the Houses of La Forge, Star and Valiant have been removed from the race for the Crown, leaving the others to seek to form new alliances with previously uncommitted forces. Messengers from many of the Houses will attempt to bring threats, promises and offers in an attempt to further their cause. However, the other Houses will not stand idly by and allow this to happen, so the dead, dying and maimed will once more grotesquely garnish the fair soil of our fractured land.

The Map of (our) England at the end of the first round of games.

The ‘Banners’ of House Wagner and Carrington.

Each player gains ‘Glory Coins’ (AKA chocolate money!) by; destroying enemy units, killing enemy leaders, carrying out boasts etc. These all go into a pot and can be spent between gams on upgrades.

For our second game of the day we played out ‘The Messenger’ scenario from the Lion Rampant rulebook. A visiting envoy from across the channel reported to his master on the outcome….

To the King of France

Our spies report that the latest attempts by the warring Houses of the benighted nation of England has led to further changes to the balance of power. First of all, House Rising is now no more, having lost in battle against the expansionist House Senza and House Wagner. In fact, the latter House has gone on to defeat forces from House Dagmar but lost to House Carrington and Senza. The House of Carrington lost one battle against the House of Dagmar but regained some sense of pride by defeating the same elsewhere. The House Loscoe forces soundly thrashed forces from both the Carrington and Dagmar families, leading to much wailing and gnashing of teeth in certain quarters.

At present, the Honours of War lie fairly evenly, with all but House Dagmar being able to muster forces from four different locations and all are ready for the final battle. House Dagmar can perhaps be discounted at this crucial point as they can only muster two Retinues to resist their enemies across the nation.

I would suggest that Your Royal Highness dispatch suitable ambassadors to each of the Houses in an effort to maintain reasonably close ties with all. France should seek to ally itself with all whilst appearing to favour none until this sorry civil strife has reached a suitable conclusion.

I remain, your humble servant,

For this scenario the ‘Attacker’ has to guide a messenger over to the far corner of the board and safely off. The defender has to stop him.

The messenger comes across a wall of pavasis and angry crossbowmen!

A messenger on another table heads for safety, guarded by loyal men-at-arms.

THE FINAL CHAPTER – “TIS A QUIET COUNTRY NOW, SAVE FOR THE CALL OF THE CARRION CROW…”

After the trials and tribulations, the battles and the alliance making, there only remained only the final ‘Battle Royal’, spread across four fields, with the retinues of the noble Houses arrayed against their mortal enemies.

The battle map showing the line up for the final battle – the Boar’s Head of Wagner and the Rose symbol of Loscoe, line up against the Unicorn of Senza and their allies the Hand of Carrington.

The room and players arranged for the final game – The ‘Battle Royal’.

Each army was split between four Houses on two sides; House Carrington and Senza versus House Loscoe and Wagner, all fighting for the chance to have their Prince or Princess declared monarch. The sounds of combat were many, as were the cries of the wounded and the rattle of the dice. Ebb and flow, cut and thrust, charge and counter charge, the Battle Royale saw men fall from the highest to the lowest, the noblest Knight to the lowliest Bidower. Weapons were blunted upon armour and flesh alike, with the wearying nature of close combat taking a toll upon the men themselves – archers and crossbowmen struggled to reload their weapons, foot and mounted men at arms became barely able to lift their weapons and the ground became red streaked mud, soaked with the blood of the dead and the dying.

The Lords of House Wagner.

By force of arms and sheer willpower, the Retinues of the combined Carrington and Senza force managed to vanquish the enemy at almost every turn and to prevail at times simply by their longevity upon the field of battle.

When the roll was called, many nobles had fallen on both sides but the Carrington Prince Harold was found to have been the hardest fighting claimant of note, having been in the thick of the fray throughout. By mutual consent with the Senza faction, Prince Harold was crowned King of England amidst great pomp and circumstance in London!

Meanwhile, the dead were lain to rest where they had fallen, save such nobles as could have their bodies spirited away by their families. There was much lamenting in many a town and village throughout the land and those who were vanquished made sullen vows to accept the new King, whilst plotting dark vengeance upon those who had now risen to a place of power…

Team Loscoe are up for the fight! (At least they were about an hour before they lost!)

For now though, with the monarchy restored and rumours of a Royal Union betwixt House Senza and the new Carrington dynasty, God Bless King Harold and St. George!

Congratulations go to all the lords of House Carrington and Senza and imparticular Earl Ray who amassed the most ‘Glory Coins’ (19!) before riding off into the sunset on his stead (AKA motorbike).

We would like to thank those who attended today’s event and really entered into the spirit of what we try to create, namely a space where the game’s the thing and everyone gets the chance to take part, share the hobby and have a good time.

Our next event will be the Frostgrave Day on Saturday 28th November 2015, but if this doesn’t appeal, rest assured we will run many more during the course of 2016.

Keep an eye on our website, our print and digital editions and on Facebook for more details.

Below is a selection of photographs of some of the great miniatures on display during today’s game (plus a bonus pic from lunchtime… You had to be there for this one to make sense!)