Letters from Mafeking, Eyewitness accounts from the longest siege of the South African War 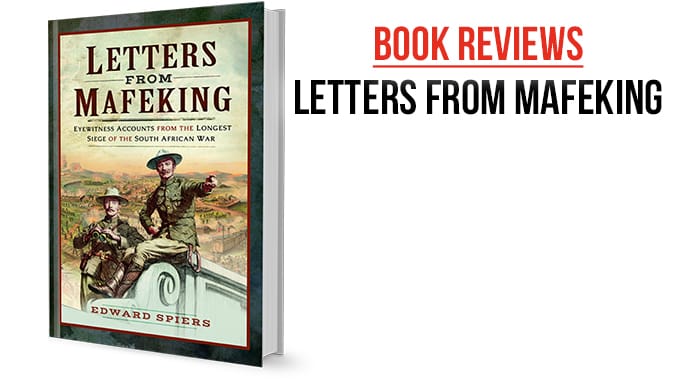 Letters from Mafeking is published by Frontline Books, one of Pen & Swords imprints, and is the third in Spiers’s series on the sieges of the Boer War; he has also written several other books on the Victorian British Army. The book runs to 288 pages with 16 illustrations and several maps.  This is a detailed book which sets out the background to the siege, both military and political then covers the siege and aftermath in an evenhanded way.  The siege itself is covered in some detail with extracts from Baden-Powell’s reports balanced with quotes from letters and other primary sources.

Spiers puts the siege of Mafeking into the context of Victoria’s Wars and shows that to many those wars were a series of sieges, successful and otherwise.  Mafeking came only fourteen years after the failure to relieve Chinese Gordon at Khartoum and four years after Chitral and there was a groundswell of opinion that there must not be another Khartoum.  The length of the siege meant it had a greater resonance with the public and the resultant wild celebrations meant that “to maffick” became a verb.  It is odd to think that such a momentous event is now all but forgotten.  At 217 days the Siege of Mafeking was the longest of the three in the Boer War and it always seemed like the most fraught of the three.  To the Victorian public sieges defined many of the wars with plucky defenders defying the enemy while hugely outnumbered and it must be remembered that wars were not reported in real time but always with a delay of days or weeks so there was always the feeling that Mafeking may have fallen but word had not yet reached Britain.

Spiers uses many contemporary sources to show the state of the defenders, and to an extent the besieges, with newspaper reports and letters being quoted.  The encirclement was never complete and the porous nature meant that messengers could sometimes leave, though few made it into the town so the defenders were unsure right up until the end whether help was coming and how close it was.

As you would expect from a Professor of Strategic Studies the narrative is heavily annotated with extensive footnotes which take up a surprising amount of some pages but which show how well Spiers has mastered his subject.  The writing is clear and concise with a wealth of information and analysis.

Letters from Mafeking is a re-assessment of the siege, and of the literature relating to Mafeking, covering the early hagiography of Baden-Powell through the revisionism of the sixties to the more nuanced and balanced recent assessments of both Mafeking and Baden-Powell.

This is an interesting book as it sheds new light on the siege, there is plenty of detail on the siege and there is much for the wargamer in it.  It is certainly worth a read to balance out the older, better known, works on the war.