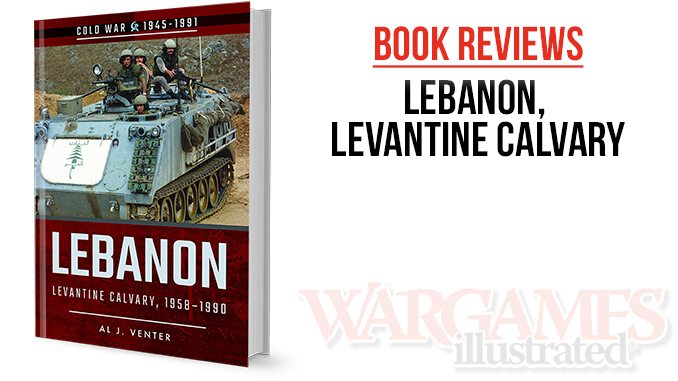 Lebanon, Levantine Calvary, 1958 – 1990, is part of the Pen and Sword Cold War 1945 – 1991 series comprising 128 pages, numerous photographs, a timeline, and a rather tacked on looking three pages of colour illustrations of aircraft of the Lebanese Air Force, drawings of firearms and three vehicles.

This is an odd book, for a number of reasons. Throughout the book Venter makes much of the problems of being a journalist in a war zone, and describes himself as a documentary maker. But, and it is a big but, on page 36 there is a photo of a young man in a beret looking through the sights of an M16 while crouched in a gun pit. The caption is “Once with the Lebanese Forces Executive Command, for the author it was quickly down to business” which is ambiguous at best but strongly suggests the subject of the photo is the writer. The final page has a photo of the author in combat gear with camera and an M16, which further suggests he was not simply a dispassionate observer but an active participant. The only reference to possibly being a combatant is an ambiguous reference to “going on operations with the SLA” which could be as an embedded member of the press. The rest of the text suggest that Venter was nothing more than a journalist, and maybe most of the time he was, but it shows a wilful lack of clarity from someone who has written over fifty books. War memoirs are common but usually the author’s position is clear, in this book it is left ambiguous and what may be a memoir is presented as journalism. The author stops short of saying “us” and “them” but it is obvious where his sympathies lie.

Venter also obfuscates when the role of the US or Israel in atrocities should be mentioned but is less reluctant when it is Arab states. We are very carefully told that a US judge in Virginia blamed Iran for the Marine barracks bombing but those responsible for the Sabra and Shatila camp massacres are left vague despite the official Israeli enquiry finding the then Israeli Defence Minister Ari Sharon (who the author describes as a friend) personally responsible.

The story is told solely from the perspective of the Christian Lebanese and their backers the Israelis with the author having spent some time embedded with the South Lebanese Army, the IDF and Israeli Navy and on most occasions travelling to and from the Lebanon through the Israeli border though boat trips from Cyprus are also narrated.

The early chapters cover the US invasion of Lebanon at the behest of the Christian government to bring stability to the country in the face of growing discontent with the unbalanced constitution and the influx of refugees from Palestine. Other chapters cover various aspects of the war thematically rather than chronologically and the narrative does jump about. The final chapter is on the situation in Lebanon in the late 1990s and is an essay first published in 1998. This is now redundant as the rhetorical questions it poses have been long answered. Which brings us to the second major problem, the book is not a coherent narrative of the conflicts but seems like a compilation of stand alone essays on various aspects, with a couple of chapters of the author’s adventures in the country. While some chapters are good others don’t really fit in a history of the war, for example the chapter on Israeli naval operations reads more like a lifestyle magazine piece.

The problems I have with the book as a historian are partially offset by the advantages the book has for me as a wargamer. There are photos of the US invasion of the 1950s which was a new conflict to me, though there was little fighting and some of the anecdotes don’t bear close examination. One consequence of Venter’s closeness to the SLA and IDF is the selection of photos of both the South Lebanese Army and the IDF in combat and in repose. These have a wealth of detail for the modeller and wargamer alike showing some of the items which festoon the vehicles, for example jeeps draped with several TOW missiles in their containers. The book is very much a mixture of good and bad, disguised propaganda and excellent photos, analysis and option. It is interesting as a snapshot of the 1990s in Lebanon but the author is too close to the subject to provide a balanced or analytical view.