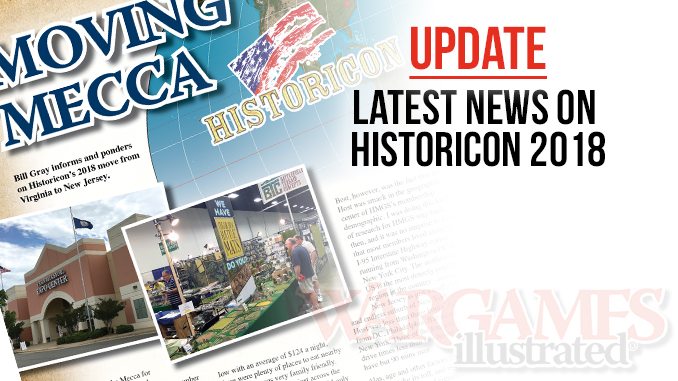 In WI353 we included a ‘Hobby Talk’ article about the future of the US wargames convention Historicon, specifically its relocation from Fredericksburg to New Jersey. Since publication of that article things have changed and it now looks like the venue won’t be switching.

Prior to its inclusion in Wargames Illustrated this same article was published on ‘The Wargamer’ Website www.wargamer.com

We asked the HMGS board to provided us with the most up to date information, which you can read here –

HMGS, Inc. Board of Directors
Update to the Membership, February 5, 2017

Although a membership update was distributed earlier, the Board has become aware of a new development that will affect HMGS’s convention plans for 2018. As previously announced, contracts are in place for all three conventions, at their current locations, for 2017. Cold Wars will be held in Lancaster, PA, Historicon in Fredericksburg, VA, and Fall-In! in Lancaster, PA. Nothing has changed for 2017 and we are looking forward to Cold Wars next month.

For 2018, HMGS had signed contracts in place for Historicon in Somerset, New Jersey, and the Board is in negotiations with the Lancaster Host for Cold Wars and Fall-In!

However, on Tuesday, January 24th, the Garden State Convention Center in Somerset, New Jersey informed us that the facility has been sold. Further, the new owner has announced plans to convert the facility to a computer data center. After June 2017, conventions will no longer be held there.

Since the use of the convention center was integral to our ability to hold Historicon in Somerset, the Board must now make alternate plans. All HMGS deposits for Historicon 2018 will be refunded.

In light of this new development, the Board contacted Fredericksburg and the Lancaster Host. HMGS already had contract proposals for one-year and three-year proposals from Fredericksburg, but needed to confirm that dates were still available. The Host was asked to provide the Board with proposals for similar one-year and three-year periods. HMGS received these offers from the Host January, 30th. As expected, the prices in the proposals have increased due to the renovation work being performed there.

In the days and weeks ahead, the Board will be considering all possible alternatives as well as their effects on the HMGS convention program.

We will continue to provide updates to the membership as new information becomes available.