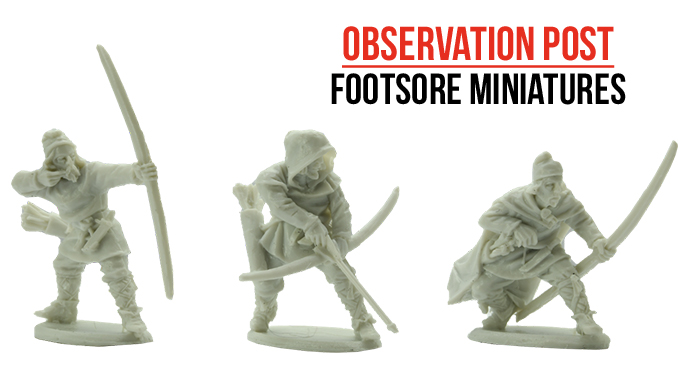 New for review this week are some additions to Footsore miniatures Dark Age range, specifically some ‘Later Saxons’.

Included in our review pack are three new slingers (resin), three archers (resin) and two command figures (metal).  All the miniatures measure about 30mm from base to the top of the head, and I compared them against my Dark Age Foundry, Gripping Beast and even my Old Glory miniatures, and they match in well with all of these ranges.

The slingers (seen below) are very dynamically posed, with one loading, one whirling the sling overhead and one releasing. The figure releasing is balanced on one leg with arm and sling fully extended, which makes for a great little miniature. Top marks to the figure designer here.

The archers (seen below) are just as dynamic, with one crouching and reaching for an arrow, one in full draw and another with an arrow nocked and looking for a target. The bows are nicely done, shaped to look like bows, whilst the feathers on the arrows are equally finely done and will reward a nice bit of drybrushing. In fact, all of these miniatures have incredible detail on their faces and tunics whilst the sculpting of the leather or fabric ties around their ankles is excellent. The miniature nocking an arrow wears a cowl, which is very reminiscent of a certain resident of Sherwood Forest, and I would encourage anyone with an interest in skirmishing against the Sherriff of Nottingham, or even playing “Rangers of Shadow Deep”, to have a look at this range as well.

The last two miniatures in our review pack are metal Characters – a Saxon noble and his Bannerman (standard bearer), seen below. The noble is standing, hand on hip, with his helmet under his arm and his hair and cape blowing in the wind. He carries a teardrop-shaped shield and wears chain armour. His faithful retainer is equally well equipped, wearing a round helmet with nasal guard, chain armour and a cape and carrying a round shield on his back. This miniature comes with a metal spear included from which to display your chosen standard.  Again, the detail on these miniatures is excellent, with the chain link armour clearly cast and with nice depth of casting on the cloaks and tunics, which will work well with your washes or contrast paints. These two would make a great command stand for any later Saxon army.

At time of writing I could not see these miniatures for sale on the Footsore website but I am sure they cannot be far from release.