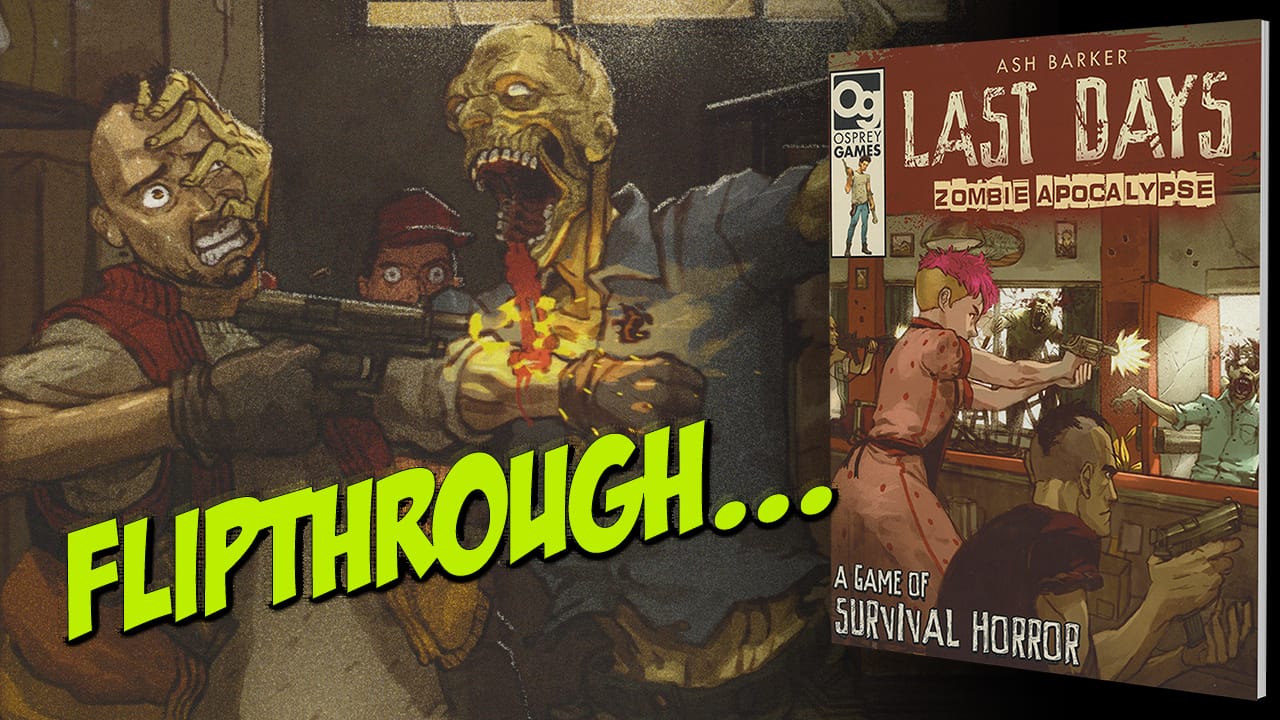 Last Days: Zombie Apocalypse is a forthcoming hardback rulesbook from Osprey Games, scheduled for release at the end of June 2018. The game focuses on groups of survivors forced into a daily battle for survival in a world full of the re-animated dead and other groups looking to find the same supplies.

The book begins with an extensive foreword from the author in which he outlines much of his design philosophy and reasoning behind the game’s development, then come the basics of the fundamental concepts used in the game. There is also a useful description of the key Characteristics used by the characters in the game, with sample stat lines.

The game encourages the player to focus upon the narrative and to create a group of survivors that has more than a ‘one-off’ game appeal. To this end, there are a choice of leaders and character archetypes on offer. Players begin the game with 100 Scavenge Points to create their group, including choosing a Refuge; one of six distinct types of location that the survivors use as a base and offer ‘Perks’ which can aid the group’s survival. Having picked your characters and their home, you must then equip them with weapons, some of which are only available to certain types of groups.

The game is fairly flexible in terms of playing area, though 3’ x 3’ being ideal. A main feature of the game is the location and seizure of Supply Tokens, being either a main or subsidiary objective. These are markers placed on the table but could equally be custom made by enterprising gamers.

Game play is divided into five phases, with the most important or suitably atmospheric phase being the Menace Phase. This is divided into three sub-phases, Noise tokens, Ammo tokens and Zombie Activation. Basically, the more noise your characters make with firearms, etc., the more likely that the zombies will zero in on that location or character, and the more Ammo tokens you have the more chance of your weapon running dry as those zombies lurch towards you.

The zombies in the game may be slow but are still vicious, especially in numbers, and, of course, must be shot in the head to be taken down for good. If you don’t roll a 5 or 6 to do so, then your shot or close combat hit simply knocks the zombie back a few steps, before the horrific creature comes at you again.

Activating character models involves using the Action Point stat, with each action requiring the spending of a varied number of Points. The winner of an initiative roll is the Aggressor and the loser the Defender. The Aggressor goes first, acting with one character until they run out of action points. Play then passes to the Defender, who repeats the process with one of their characters. Play alternates in this way until all characters on both sides have had a chance to activate.

Shooting and Close Cobat work in slightly different ways as part of the action phase. Line of sight and range are standard fare, but the Defender player starts the Shooting with one character, then alternates with the Aggressor. The Firearms Ability (FA) of the character is used, with some suitable modifiers, and players have to roll a D6, add their FA and beat a 7 to hit a target.

In the Close Quarters Combat (CQC) Phase, combat is simultaneous, so an Opposed Roll on a D6 is made, adding in each character’s CQC stat and any modifiers. The model with the highest score wins and the Strength of the weapon used in attack is added to a D6 roll to see if the character is wounded or slain.

Zombies get their own section in the book, with the basic stat line, movement and combat effects, plus the interesting Horror and Courage rules, where an Opposed Roll is made and the Horror and Courage scores added. If the Horror beats Courage, then the character is trapped in a deadly embrace with one or more zombies, unable to escape and locked in combat.

Characters may be given Skills to enhance their ability to perform certain actions, and equipment has certain Attributes that may make them more useful in a given situation. There are also comprehensive quick reference tables to ease gameplay.

Given the game’s aim of encouraging narrative play, the inclusion of a Campaign system was an obvious choice. This is fairly comprehensive without being overly difficult to deal with, and offers a level of detail that enhances the overall gameplay. There are also 6 scenarios or Encounters that can be used as the basis for your narrative, all well described and providing a sense of being part of a typical video game style experience within the genre.

This is a very ‘Romero Rules’ game, which really works to evoke the atmosphere of being trapped in a nightmare reality. The zombies may seem a little ‘peripheral’ at times, with characters focused on out-doing the other survivors, but if you don’t watch out, the next thing you feel will be clammy hands and the bite of a rotten corpse! This is a game for those who enjoy a ‘roleplay-lite’ gaming experience, with some attempt to offer a level of character creation that other skirmish games avoid. The artwork and photographs really add to the overall tone and the sense of a battle for survival in a fractured world. A great first rulebook from Ash Barker and one it would be good to see Osprey expand upon in the future.