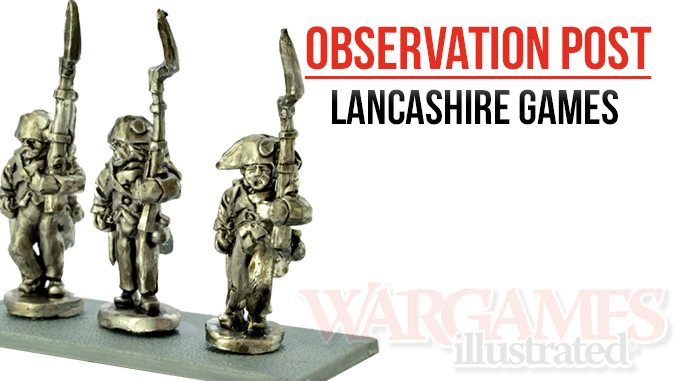 Lancashire Games have provided more examples of their new and upcoming ranges. We have samples from their 15mm World War One Germans and the continually expanding 18mm Napoleon in Egypt range.

Our first pack is a three figure command pack from the World War One German range, in appropriate uniforms and equipment. Depicted in a variety of poses, we have two officers and an NCO. One of the officers wears a Pickelhaube and the other a cap.

The next four packs are taken from those available for 18mm Napoleon in Egypt.

The first pack represents three Turkish Janissaries on foot with muskets. These are sculpted to perhaps form part of a firing line and are great depictions of their subject, from moustaches to muskets, headgear to jackets, they capture their subject very well.

The next pack is three Bedouin Camelry, quite generic looking fellows who wouldn’t look out of place in a host of Arab armies. One of the figures does carry a carbine but the others have spears.

For the French, we have three infantry Advancing in Bicornes, in full equipment and with nicely sculpted faces. Their muskets are carried for marching purposes but are topped with bayonets which would no doubt gleam brightly in the desert sun.

The final pack represents members of the Dromedary Corps, three ‘lucky’ souls put to work as riders for the ‘ship of the desert’ and armed with muskets and sabres. Again, these are fairly active poses with some nice characterization.

The Napoleon in Egypt range consists of a large number of packs covering the French and Mamelukes, with forays into the Turkish. These are fairly ’large’ 18mm miniatures but have a pleasing presence on the tabletop.

Lancashire Games have a huge number of historical ranges in 15 and 18mm and offer a range of Army Packs to suit every pocket. More importantly, they can be relied upon to complete ranges and provide all the options a gamer could need for every period they cover.