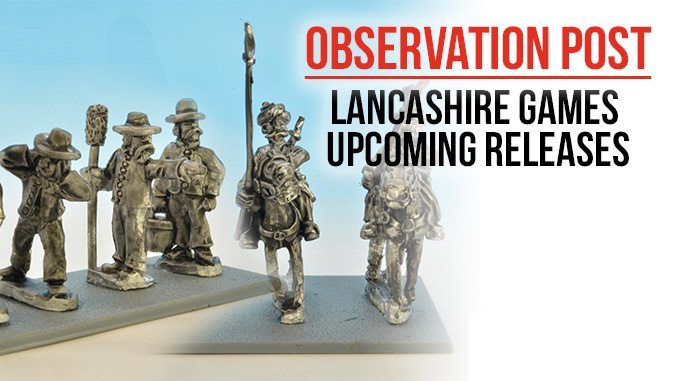 Lancashire Games, from Oldham in the UK, sent us some samples from two of there future releases in 18mm. We have three packs from the forthcoming ACW range and some figures from the soon to be released Napoleon in Egypt range. Due for release in February, the 18mm Napoleon In Egypt range contains a variety of miniatures to enable you to field French and Mameluke troops in the first instance. We received four packs from the Mameluke part of the range. The first pack is RWM4, consisting of three Mameluke Cavalry, depicted Advancing with lances. The second pack is RWM6, three Mameluke Cavalry standing with Lance. RWM2 is Mameluke Cavalry Charging with lance. And the last pack is Mameluke Command, currently uncoded. All the packs contain well-sculpted figures, with some nicely rendered examples of Mameluke dress. These are one-piece castings but the ‘join’ between mount and rider is distinctive. The charging figures in particular have a real sense of motion, and have great dynamism. British forces will be made available later in the year for this theatre, and the Lancashire Games battle packs will allow you to rapidly field large, varied armies to represent both armies. Available in March 2017, the planned 18mm American Civil War range will also contain a variety of miniatures designed to allow you to field a wide cross-section of troops. We were sent three sample packs, as detailed below. Codes for each pack were not available at the time of writing. The first pack is three figures at March attack, carrying their weapons at left shoulder shift and hurrying forwards to the battlefield. They are wearing greatcoats, suggesting poor weather, perhaps intended for battles set during the winter? They are fairly dynamic looking miniatures, perhaps pushing forward into the harsh weather or a hail of shot? The next pack consists of three Command figures, with a bearded officer pointing with his sword, a similarly hirsute drummer and a standard bearer. Again, all the miniatures are wearing greatcoats and would obviously compliment the earlier pack. Again, these warriors are on the move, with the office pointing the way and leading by example. The final pack is four artillery crew in wide brimmed hats, obviously hard at work. All four are wearing short jackets and would perhaps be best suited used as Confederates or Western Theatre Union troops. One of the best things about Lancashire Games is the consistent quality of their miniatures, plus the large number of options they provide across any of their ranges. Given that they sell most of their ranges in Battle Packs of 60 infantry and 24 mounted and provide a discount for the more you purchase, you can soon create an army for
If you are seeing this message after signing in, PLEASE PRESS THE BROWSER REFRESH BUTTON