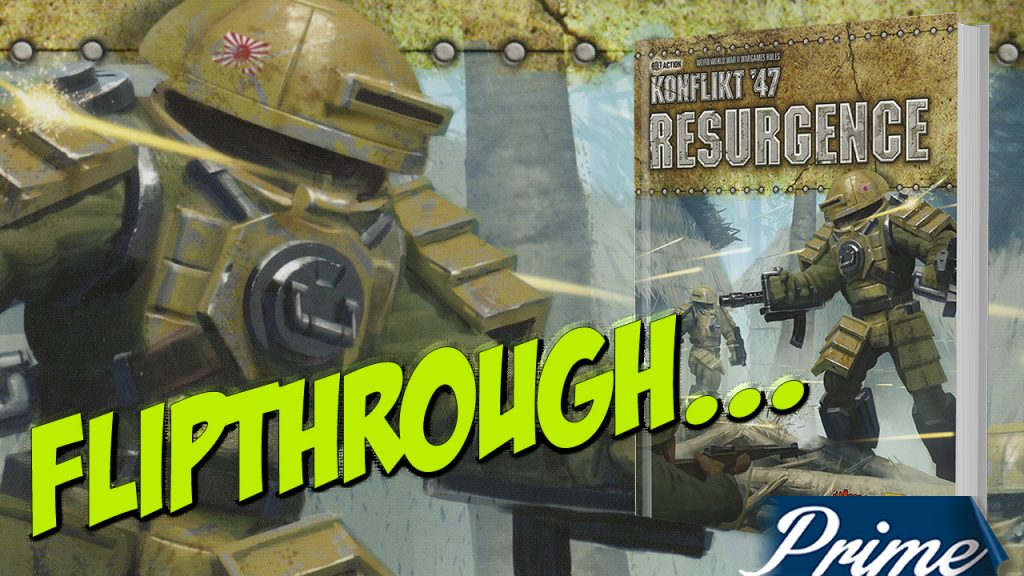 Resurgence, the new supplement for the Konflikt ’47 rules system from Warlord Games, adds a number of new aspects to the game. These include new and revised rules, new units and two new army lists.

Firstly, the book moves the background further along the alternate timeline, taking players from the beginning of March to June 1947. All the various forces and fronts are covered, plus there is some added narrative for the beleaguered Finland and the forces of Japan.

There are a wealth of new and revised rules from page 24 onwards, covering everything from weaponry to combat, types of platons to HQ options and to revised vehicle rules and additional options. These have come about following additional playtesting, items taken from some of the currently available Bolt Action supplements and aspects of the new second edition version of the Bolt Action game.

The new unit rules cover all the original Axis and Allied powers, with revisions for weapons and squads, new characters like the Paragon Troopers and the Daughters of the Motherland, plus new weapons teams and force orgainisation details. The range of new Walker variants, weapon options for armoured vehicles and new support vehicles all help to add even more Weird War to the mix.

Army lists for two new factions are included, bringing the Imperial Japanese Army and the Finnish into the game. The advances in Rift-tech of the Japanese are outlined in full, adding in new weaponry like the compression rifle, special rules for Japanese forces, standard infantry squads, the Exoskeleton squads and the feared Ghost Attack Squads with their phase technology, plus the Skorpion Crawler, a light Walker. The Japanese are at the cutting edge of Rift-tech, able to make better use of the designs and information supplied to them by their Axis partners.

In contrast, the Finns are entirely reliant on the support of Germany, especially since they were occupied by the Soviet Union. There are details here of the Finnish Resistance units, the mostly Finnish SS Freiwilligen Division Nord-Ost who are battling the Soviets and the wide variety of equipment that is provided for their use. Although armed and equipped by Germany, these are proud Finnish warriors with their own special rules and abilities, including Sissi Recon Squads on skis.

Finally, there are new rules for use in the game and with scenarios, plus six new scenarios to try. All the scenarios are clearly set out and have simple maps to ensure that set up and gameplay can progress as quickly as possible.

This supplement adds a whole raft of new and revised rules to the Konflikt ’47 universe. It also adds a host of new weaponry and two new armies that each have some unique flavour. Anyone who already has a copy of the rulebook or is thinking of starting out in this Weird War Two gaming environment needs to have a copy of this book.