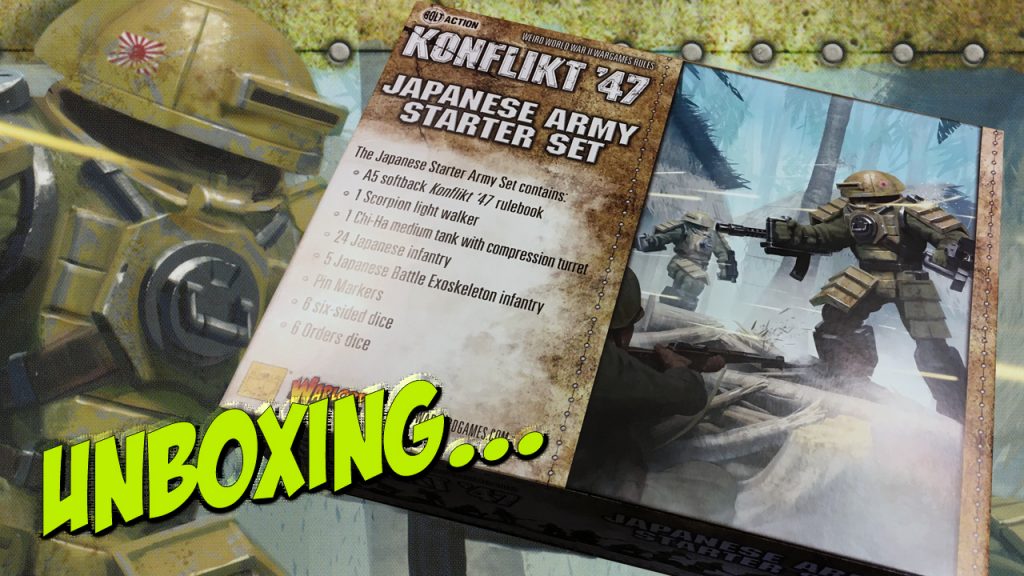 One of Warlord Games’ latest releases for Bolt Action variant Konflikt ’47, is another of their bargain starter sets, this time for gaming the battles in the Pacific between the Allies and the Japanese army. This is a packed box that has all you need to build the core of a force.

Once you lift the lid, the first thing you come across is an A5, paperback version of the core Konflikt ’47 rulebook. This is a pocket sized, gamer’s edition, but doesn’t skimp on content. Separating the book from the main contents is an ‘inner box’, which has a handy playsheet printed upon it.

The miniatures in the box are taken from the current Japanese Bolt Action range, with 24 standard plastic multi-pose infantry and 1 Chi-Ha medium tank with its optional upper hulls. However, there is also a resin turret with a couple of metal parts, designed to represent one of the Japanese Rift tech weapons; the compression cannon.

The Weird War elements continue from there, with a multipart Scorpion light walker with resin and metal parts. This is the Japanese version of the German Spinne light walker, with a suitably Japanese twist.

The last set of figures are 5 Japanese Battle Exoskeleton infantry, metal casting with optional arms and heads. Again, these are Rift tech warriors, with more than a touch of the Samurai about their strength enhancing armour.

The final elements in the box are all gaming related. We have bases of course, but we also have some useful plastic pin markers, plus some six-sided dice and the essential Order Dice needed to play the game.

As we have come to expect from Warlord, this starter set offers a great way to get going in the Konflikt ’47 universe, in the Pacific theater in this case. Granted, you would need a copy of the Resurgence sourcebook for army lists, etc. but, having saved on this starter set compared to the overall retail price for the components, you should still have enough cash for the sourcebook and maybe a few more minis…?