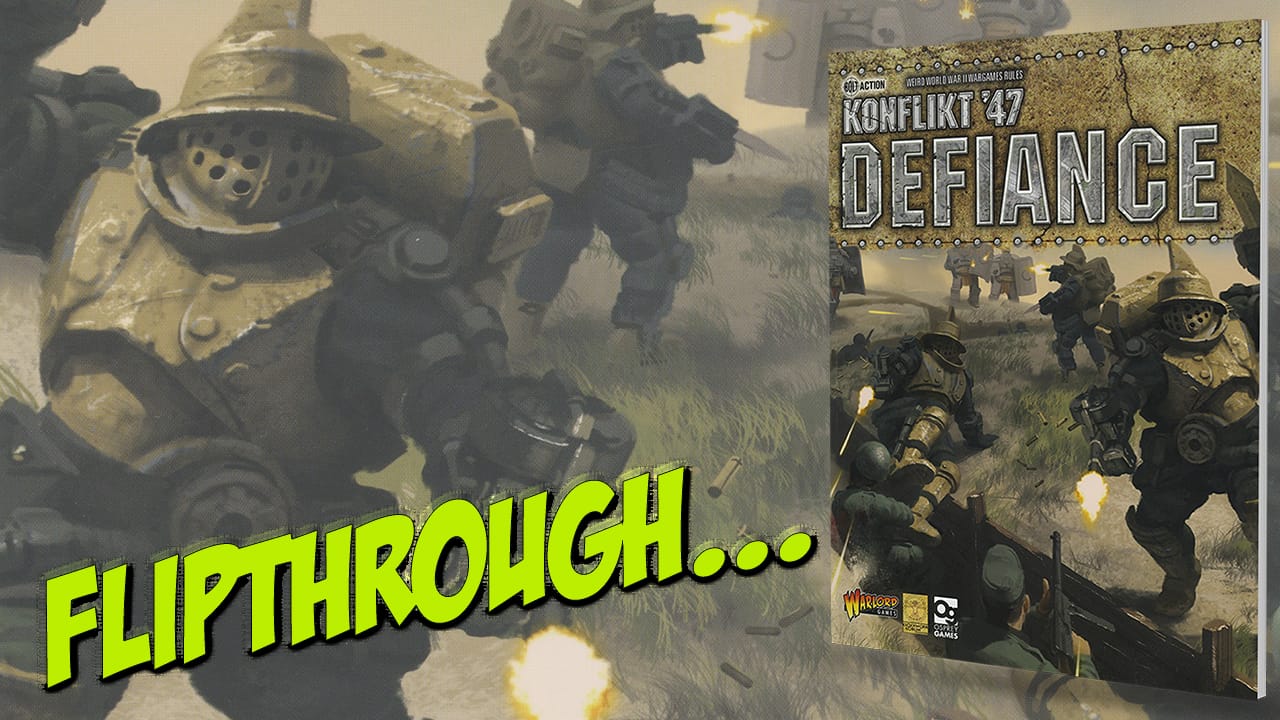 Defiance, the second supplement for the Konflikt ’47 ‘Weird War Two’ game, introduces a host of new and updated rules, new force selection and new unit options, plus new scenario rules, and outlines the forces of the divided nations of Italy.

Note: The text below is the transcript of our flipthough video (for those who would rather read than listen).

There is a great deal of new rules and information crammed into this book, including new and amended combat rules, revised weapon summaries, new unit special rules, a re-produced web article for the Totenkorps and Shi-bito zombies which offers new rules and new force selection rules and charts for all the major belligerents.

There’s actually almost too much to deal with and I would suggest a break or pause as you digest each section! One aspect that is slightly lost is the addition of the ‘tank killer’ Rail Guns, a major change to the game but slightly tucked away amongst a lot of other detail.

The book alludes to a Canadian decision to field their Rift-tech and human forces in a different fashion. However, the authors have chosen to represent this information in the form of a report summary from a fictional US Army Ordinance Officer to an oversight Committee.

Essentially, the lengthy report emphasizes the decision of the Canadians to fully integrate Rift-tech forces, such as the robotic Automated Infantry, directly into their infantry platoons. A nice touch is the use of female Walker crews, adding a new angle to the Allied forces.

The ‘message’ of this piece of fiction is that combined arms forces work very well on the tabletop. This background ‘fluff’ also postulates that using female crews is not only a logical extension of a background where troops are in short supply but that female crews are better with Walkers. As enjoyable as this all is, the same job could have been done more simply with a more focused ‘How to get the best from your forces’ piece and new rules for integrating AIs into infantry units, plus new stats and rules for female Walker crews (noticeably absent from the book).

This would have been clearer and simpler to read, with the most important points being conveyed adequately rather than suggested.

A number of new scenario rules are here, dealing with extremes of weather during wintry conditions or regions, plus how to field and cope with various types of minefield. These offer new tactical options and problems that have to be dealt with by players.

A whole host of new units are included in a well laid out fashion. These are intended to provide further options for those picking a force and don’t appear to be replacing anything already available. Given the nature of the background, it is good to see how the technology and unit organization of the different powers has changed, much like it did during the real World War Two. This adds a level of ‘realism’ to the Weird War aspects; this is a background that moves forward rather than a static narrative. All the different powers are covered, so there is something for every player looking to field something different.

Speaking of something different, the main additions to the Konflikt ’47 game universe are the two sets of Italian forces, which are outlined. The Fascist forces of Mussolini and the Italian Social Republic, backed by Germany, and King Victor Emmanuel III’s Kingdom of Italy, backed by the Allies, continue to struggle for dominance in the ‘soft belly of Europe’.

There are new special rules for the two armies, which have many common units but use slightly different tactics. Fundamentally, like many of the armies, both forces use standard World War Two era equipment. However, Axis and Allied Rift-tech makes its way in, with Walkers, Tesla weapons and very distinctive Heavy Infantry, with the Social Republic’s Romanesque Centurion style being a favourite. These are two great ideas for armies, and offer a new and distinctive setting for gamers to explore. A very welcome addition to what is already an enjoyable gaming environment.

The final section is new background material, focused on Norway, plus a campaign which outlines 5th Panzer Armee’s actions during the Spring offensive of 1947, which has great maps and interesting scenarios. However, it seems a little odd to introduce a new army choice, a host of new units and then finish with background for a different theatre and a campaign which focuses on the efforts to seize a bridge on the Western Front in France!

This supplement has a wealth of new rules, new units and two new forces that can be used within the Konflikt ’47 counter-factual timeline. Everything you need is here to add to the game, presented in the clear layout one would expect. However, some of the choices of what to include seem a little ‘scattergun’ – concealing some sound tactical advice for rookie and veteran gamers in a characterful fictional piece is slightly odd, and introducing new forces that can’t then be used with the new scenario and campaign rules, after a side visit to Norway, doesn’t match the usual style of supplements from Warlord Games’ Bolt Action range. Given that Konflikt ’47 is closely allied to that style, a rather haphazard ending to a great supplement leaves me a little cold. This may be a supplement for a Weird War Two game, but the editorial decisions regarding what is included in some parts of the supplement seem more than a little weird to me.