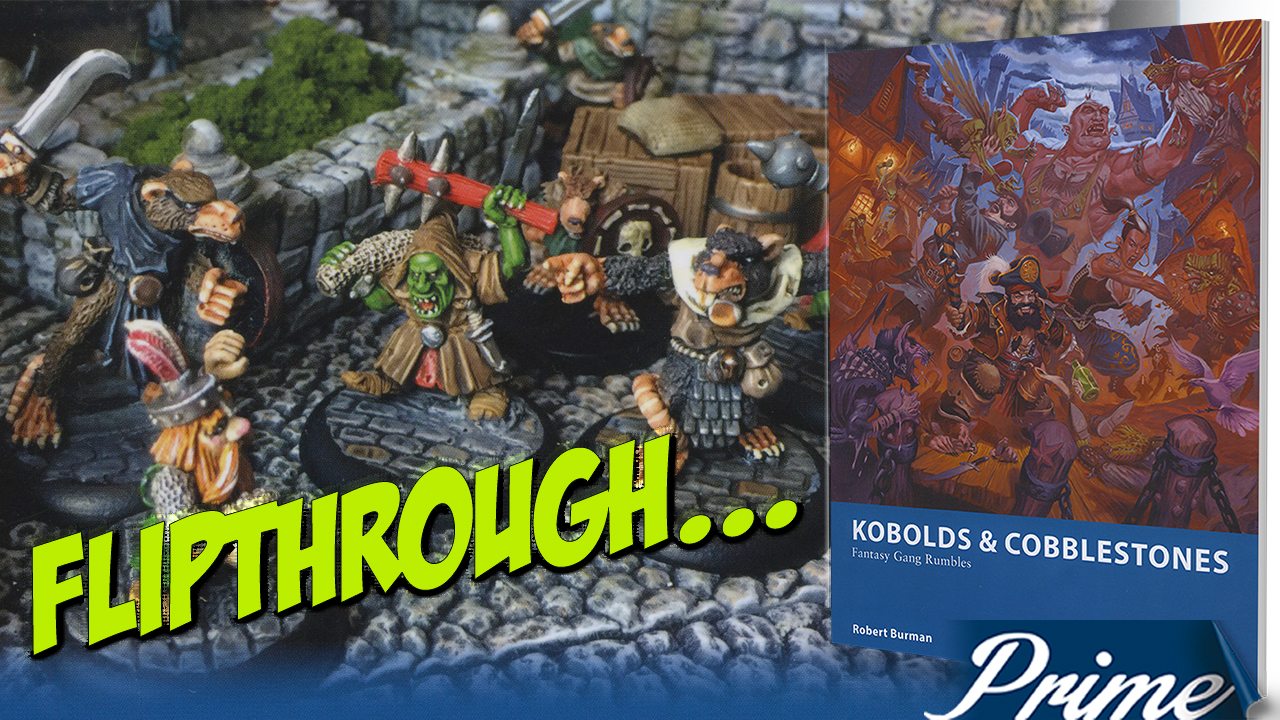 One of the latest ‘blue book’ rulesets from Osprey Games is Kobolds & Cobblestones, a skirmish level game designed for inter-gang warfare amongst a cast of standard fantasy races.

The rulebook begins with an overview of the background to Ordinsport, the main setting for the game. This is relatively short, allowing the player to add their own ‘colour’ to the game. We are then straight into the core concepts of the rules, dealing with the role played by playing cards, which replace both rulers and dice in the game, and the basics of creating your gang form the archetypal characters, which can come from almost any race.. Alongside the rules are some evocative examples of artwork that seeks to convey the ‘style’ of the denizens of the city.

A standard pack of playing cards are the main tool used in the game, usable as a guide to movement, which is noted as being either ‘L’ or ‘W’, corresponding to ‘Length’ or ‘Width’ of a standard playing card. This is usually the Joker as the other cards are needed for activation, ranged and melee combat and other game play. Once a hit has been scored, players use the basics of poker, with a handy guide to the game located in the back pages. The player’s hands of cards are compared and the greater the difference, the worse the result, including Critical Hits.

The results of Critical Hits and magical spells are outlined as a series of named and explained results, as are the basics of the Special Abilities that certain gang members have that may be used to add to or defend against damage. A slightly different take on rules of this type is the use of the gold accrued by a gang, which can be used during a game to change the nature of play. Magic is also a part of the game, and a Wizard may be hired as a part of your gang. However, casting magic spells is a difficult thing during a fight, with the potential for the spells going awry. Spells are divided into Attack and Support. Playing cards are used but, rather than poker-style, players aim to out-do each other in a game of blackjack.

The Gang Members Lists section outlines a number of Gang Leaders and typical gang members who can be recruited. Once you have chosen one of the leaders, which are detailed with a stat line, character traits and any special abilities, you can recruit your basic gangers. The lowest level of gang society is the Runts, followed by Thugs, Big Guys and Specialists. Each type of ganger costs a certain amount in gold, with the amount of ‘start-up’ coin being mutually decided in a casual game. For campaigns, this is fixed at 10 gold coins. Gang members may be from the full range of racial backgrounds, allowing you to field a variety of miniatures.

There are full campaign rules and a total of eight scenarios included in the book. These rules include how to generate and maintain your gang for a campaign, buying and selling equipment, making discoveries, increasing your power and notoriety and the different ways that a campaign can be won. The scenarios are suitably generic but could be woven together to make a desired narrative.

The rules are fairly standard for a gang warfare experience, although the use of playing cards throughout is a change to the norm. However, the background setting and concept are atypical of a ‘typical’ fantasy game and would make for some interesting and varied gangs on the tabletop.