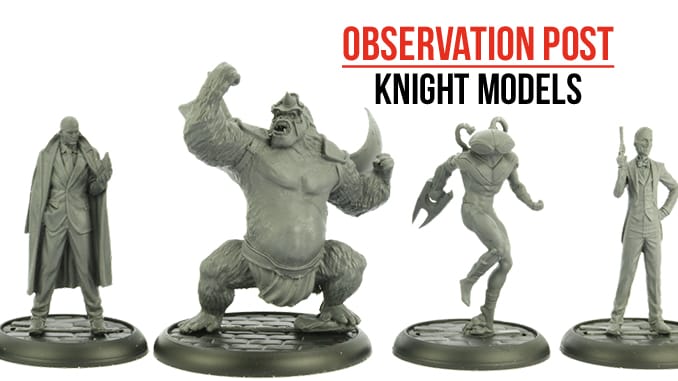 Knight Models continue to release some of the most definitive miniatures based upon the myriad characters of the DC Universe. Two of their most recent releases are Superman and the Legion of Doom, released in the form of boxed sets.

The Legion of Doom boxed set contains six of the worst villains from the DC universe. We have the insane Joker, the ultra-intelligent Lex Luthor, the bestial Gorilla Grodd, the vicious Cheetah, the undersea adventurer Black Manta and the alien Sinestro. Cast in top quality resin, these 35mm figures are excellent renditions of the characters as seen in the comic books. Also in the box is a reference card for each of the figures, with full game stats for use with the miniatures game, and suitably sized plastic bases for each figure, which are produced with a cobbled street effect.

Of course, to stand against this panoply of evil, we need a hero, and who better than the Son of Krypton, Kal-EL, known to the denizens of Earth as Superman. This particular figure shows the Man of Steel as he leaps into the air, from a base which is a stylized version of the Daily Planet symbol which spins slowly on the top of the newspaper’s building. This is an extremely dynamically posed figure, a collectible in some ways, with specialist assembly instructions. However, the figure also comes with a games stat card, so it can be used during games.

These are exceptionally detailed sculpts, based upon 3D sculpting technology. They are very accurately scaled with one another, with the difference between the mass of Gorilla Grodd and the elegant evil of the Joker being very well done. If you’re looking for the best DC Universe figures you could ever find, begin and end your journey here.