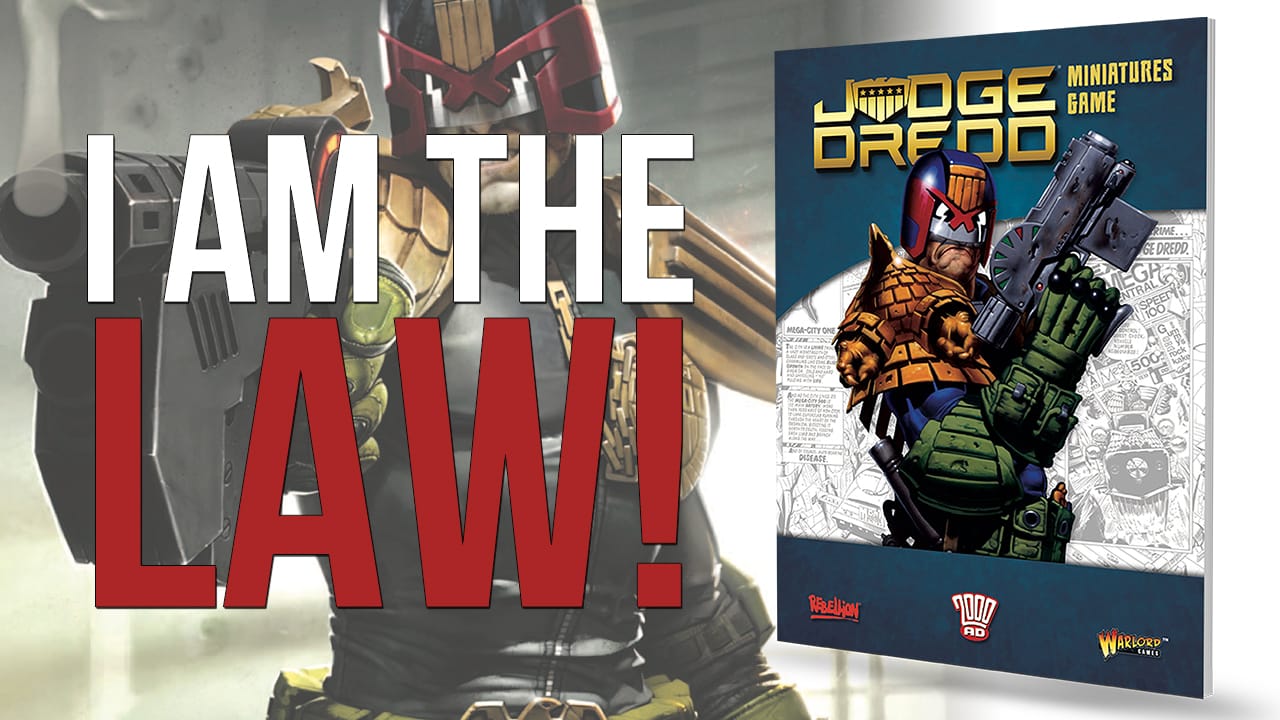 Having recently unboxed the Judge Dredd: I Am The Law! boxed game from Warlord Games, we thought we would take a closer look at the core rulebook for the Judge Dredd Miniatures Game.

The rulebook is 160-pages and offered as a softcover. Although there is also a hardback version, the latter is a limited edition version and offered at a premium price.

After a brief introduction which provides a basic guide to what is needed to play the game, we are straight into the core rules, with how to use the special tokens and dice, the basic game turn and use of actions, and the combat system, which works at ranged and close combat level using the specialist symbol dice. Along the way, we come across some great background ‘sidebars’ and some of the best artwork from the ongoing Judge Dredd adventures from 2000AD and Megazine.

Having established the core rules, the next sections deal with specific aspects. Mounted models, vehicles, terrain and their use and effects within the game are fully explained, although, like the core rules, there are few examples of play and those that are present are textual rather than visual.

Of course, part of Mega-City life is conflict, and conflict requires weapons. The Armoury section outlines the name and stats for a full panoply of weapons, most of which have featured in the comic book stories over the years. From pistols to Spit Guns, Stump Guns to rocket launchers, baseball bats to culinary lasers, they are all here, fully explained and ‘stat’ed out’ for gameplay. Those weapons with special rules are explained, with two textual and visual examples being used, the first such combined examples in the rules so far. The rules also explain the use of yet more required items to play the game ‘properly’, namely the Armoury and Big Meg cards which offer bonuses and game changing events when used by the players.

The next section deals with the Justice Department, the Judges who seek to bring The Law to the Mega-City. Full stats for generic Judges and their specialist weapons are given, then we move onto the same for some of the classic characters from the pages of the comic books, including Judge Dredd himself, Judge Anderson, SJS Judge Gerhart and even the robot Judges.

Of course, after all that Law, we need some characterful lawbreakers, so we have stats and a description for Judge Death, ex-Judge Grice, vigilante Karl Raider and scarily efficient Orlok the Assassin. These are the counterpoint to the Justice Department, the most dangerous opponents they have ever faced.

Next comes information and stats for the more ‘normal’ criminals that Judges are likely to encounter, such as Block Gangs, Citi-Def units gone rogue, the perennial fan favourite Mean Machine Angel, the League of Fatties, and more, all lifted from the comics and brought to the tabletop.

There are six scenarios included in the book, with full instructions and outlines for the players, covering all the facets of the rules.

The final part of the rules offers a campaign system, allowing players to use the same force over a number of games, becoming more powerful as time goes on. At the very rear of the book are full colour photocopiable pages of the Armoury and Big Meg cards.

This is a well laid out book, with rules that have been adapted from the previous Strontium Dog Miniatures Game but ones which have been given almost a complete overhaul to become a true ‘slice of life’ in Mega-City One. Almost every aspect of the comic book background has been transposed, and the use of selected classic characters, plus the short snippets of background, use of artwork and the photographs of game set-ups really add to the overall atmosphere. One gripe is perhaps the lack of examples of play, especially the now common ‘combined’ textual and visual, and perhaps the fact that the game uses special dice and counters to make it ‘work’, but overall this is a good looking set of rules that, having tried them, work very well.