Judge Dredd: I Am The Law Starter Set 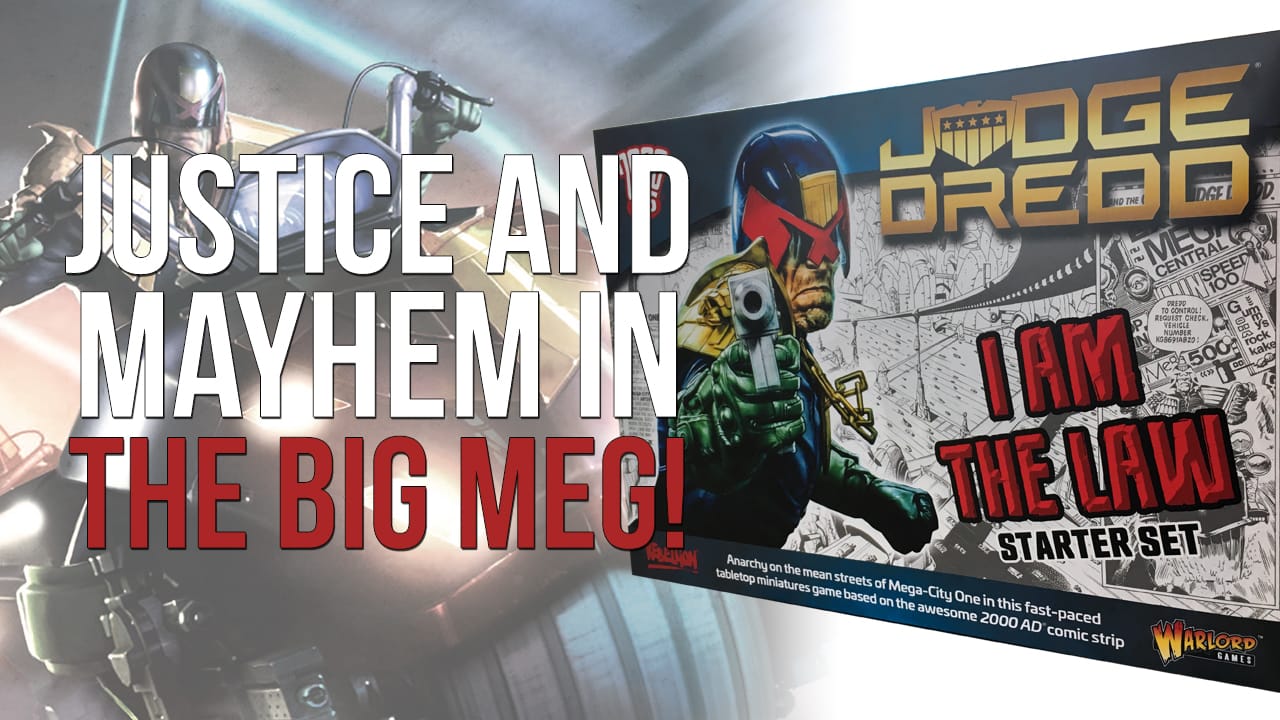 The new Judge Dredd: I Am The Law Starter Set from Warlord Games has brought the dystopian nightmare that is Mega-City One from the pages of the 2000AD comic to the tabletop.

Upon lifting the eye-catching box lid, the first items you come across are the plastic game tokens. There are three frames in total, two moulded in dark blue, the other in dark gold. These are used during the game to assign different statuses during the game, the gold ones for Judges and the others for the criminals and other denizens. Of course, after the game tokens, the next requirement are other game components, in this case eight specialist combat / action dice, plus two small red standard six-sided dice.

Next come the Big Meg and Armoury cards, which are dealt out to each of the players and used as directed during the game. The character cards are also here, providing the stats for each of the figure types included in the starter set. These figures are to be found in a clamshell pack, ten in total, eight gang members armed with various weapons, a Street Judge and a Rookie Judge. All of these are fairly generic, so they may be used as a blank canvas for the imagination of the players themselves. They are quite tall figures, around 35mm tall, with realistic proportions, and are made from a hybrid resin-plastic material. A sheet of decals is also here, allowing any buildings bought and used to be given the ‘look’ of the Mega-City.

The next levels of the box consist of the paper-based components of the game. An 8-page booklet contains three ‘starter’ scenarios that can be linked together to create a narrative. Next comes a full colour, double-sided printed ‘playmat’, with one side showing a road and urban landscape, and the other a more industrial area. To add some extra terrain to this playmat, albeit 2D versions, we have a punchboard sheet of cardboard. These are also double-sided, with one side having images of fairly pristine aspects of the huge MC-1 such as vehicles, food vending booths, etc., and the other either damaged and destroyed versions of the same or dumpsters, piles of trash, etc.

After all these different components comes the 160-page softback rulebook. This is full colour, with a clear layout, a plethora of classic Judge Dredd artwork, great photographs and a full background to the world which supports the game. The rules themselves are partially based upon the Strontium Dog game previously released, although they have been refined by the authors to better emulate life in Mega City One. All the ‘classic’ aspects of the Dredd-iverse are here, from Lawgivers to Lawmasters, Madmen to Mutants, Citi-Def to Citizens, all wrapped up in the type of rules which are simple to grasp but hard to master.

As no doubt intended, this is a great introduction to both the game and the world of Judge Dredd. As starter sets go, this is a good one. The figures are good, if perhaps outsized compared to those of the past, albeit some of them have a somewhat ‘flat’ appearance when viewed from certain angles. Nevertheless, as a game concept and licenced product, this is an excellent start that can easily be refined with later releases.