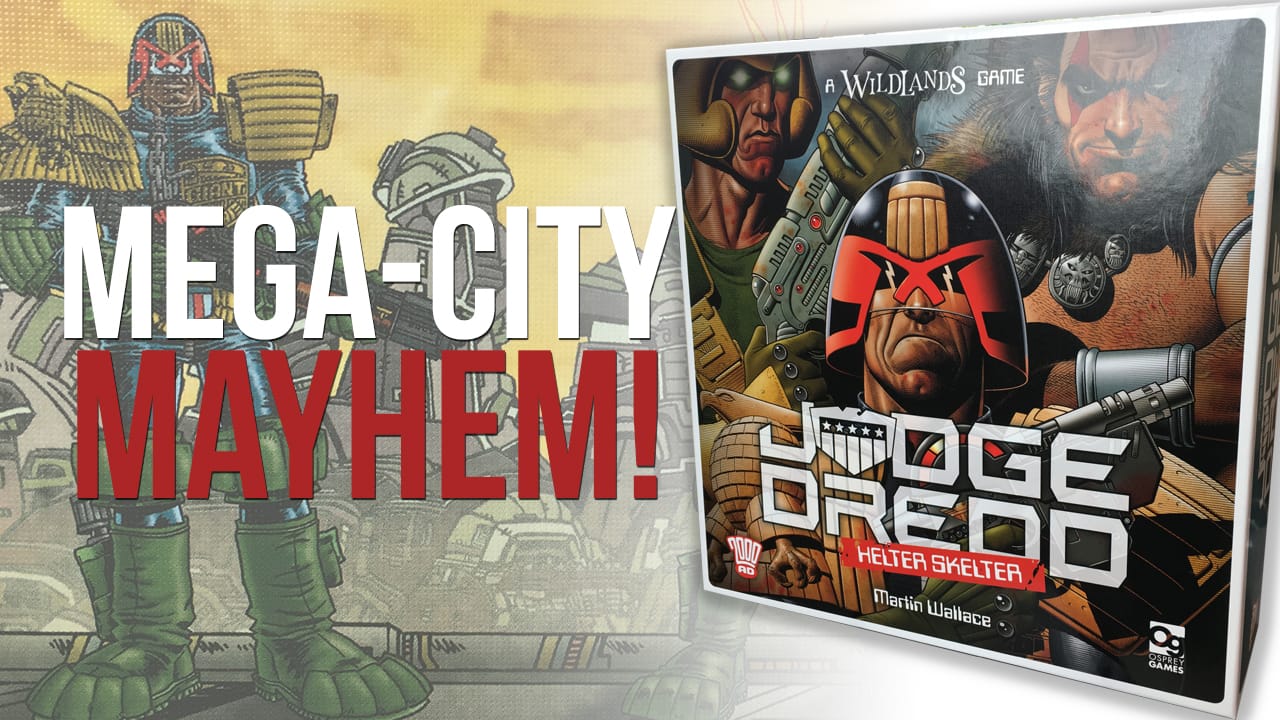 Building upon the success of the Wildlands fantasy themed ‘board game with miniatures’, games designer Martin Wallace has worked with Osprey Games to produce the Judge Dredd: Helter Skelter set.

The game takes the premise of the Helter Skelter storyline from 2000AD progs 1250–1261. In the comic book story,  an army of Dredd’s greatest foes, from alternate dimensions where they won, band together under an alternate Chief Judge Cal (see The Day the Law Died) and use dimension jump technology to invade Dredd’s dimension, unable to stand the idea that there is a universe where he won. Their presence starts a total collapse of all universes, causing characters from other 2000 AD stories to appear in Mega-City One – Cal intends to exploit this chaos.

Lifting the lid of the sturdy box, we come across the main rulebook.  This is a ten page softback book which details the main rules and provides an overview of the four main factions in the game. Designed for 2 to 4 players, the game provides four different ‘team’ options, with 5 characters per team. Players choose from either Mega-City One Judges, Strontium Dog bounty hunters, Nikolai Dante’s team of experts and Slaine Mac Roth’s warriors. The special rules for each team are explained, and every rule is explained using suitable diagrams, with details of how to use each side of the double-sided game board during gameplay.

The folding double-sided game board is actually the next item in the box. This is made from durable, heavy gauge card, with one side representing the Halls of Justice and the other the area between and within two Citi-Blocks. Both locations are heavily damaged, and have various numbered areas highlighted. Each location provides for different encounters, from combat to items to be recovered.

Beneath the board, we come to the first of two clear-lidded plastic storage trays with space for miniatures and game cards. The first layer contains the Judge and Strontium Dog teams. Each of the five plastic miniatures in the teams represents a key character from the 2000AD universe. They are fairly detailed figures, which capture the likenesses very well. The plastic is quite sturdy, although some of the smaller parts bend quite easily. Each of the figures comes pre-ink washed, ready for tabletop boardgame use. Alongside the figures are the character and game cards for each team, allowing players to put together a suitable Action Card hand during gameplay, plus the team and reference cards. The second tray contains figures and cards for the Dante and Slaine teams, plus the plastic Fragments of Reality tokens, counters and coloured bases which clip onto the bases of the figures. The Map Cards are also here, which details how the objectives are set out on the maps to provide game set up.

This is a great looking product which contains easy to learn rules but some varied, challenging gameplay. The use of miniatures adds another layer to the gaming experience, and the card driven system keeps components to a minimum. No doubt further expansions will be offered in the future but, in the meantime, you can take part in one of the many stories that have helped to define the Judge Dredd universe over the years.