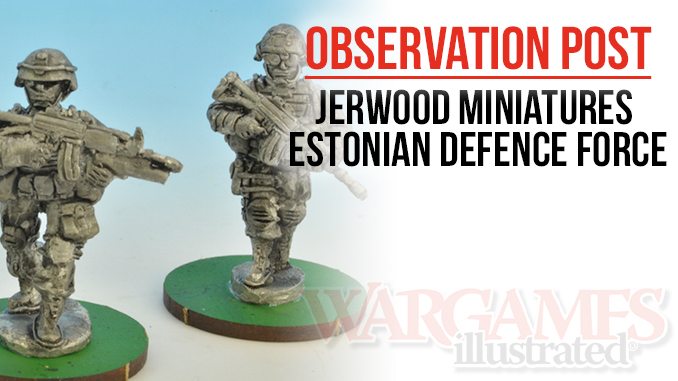 A new company, Jerwood Miniatures, has a different take on Modern era figures. They’re looking not to the West but to the East for their inspiration, eastern Europe to be exact.

They currently have three packs of miniatures for sale, including EST 001, Estonian Infantry Advancing.

These miniatures are intended to represent members of the Estonian Defence Force from 2003 up until the present day. Estonian troops served during the Iraq war as part of the Coalition forces.

The figures are fairly ‘chunky’. Three of the figures carry Galil assault rifles, one of which sports an underslung grenade launcher and the forth carries a very large looking SAW, modeled on the IMI Negev light machine gun.

Two of the infantryman are wearing goggles, whilst the SAW gunner has a pair on his helmet. The figures are moving in what appears to be ‘patrol’ mode, weapons carried ready for action.

These are nicely sculpted miniatures of a certain style, and an unusual subject for a new company to tackle. Future releases are planned, including other Baltic states and Poland.