Italians in Flames Of War Version 4 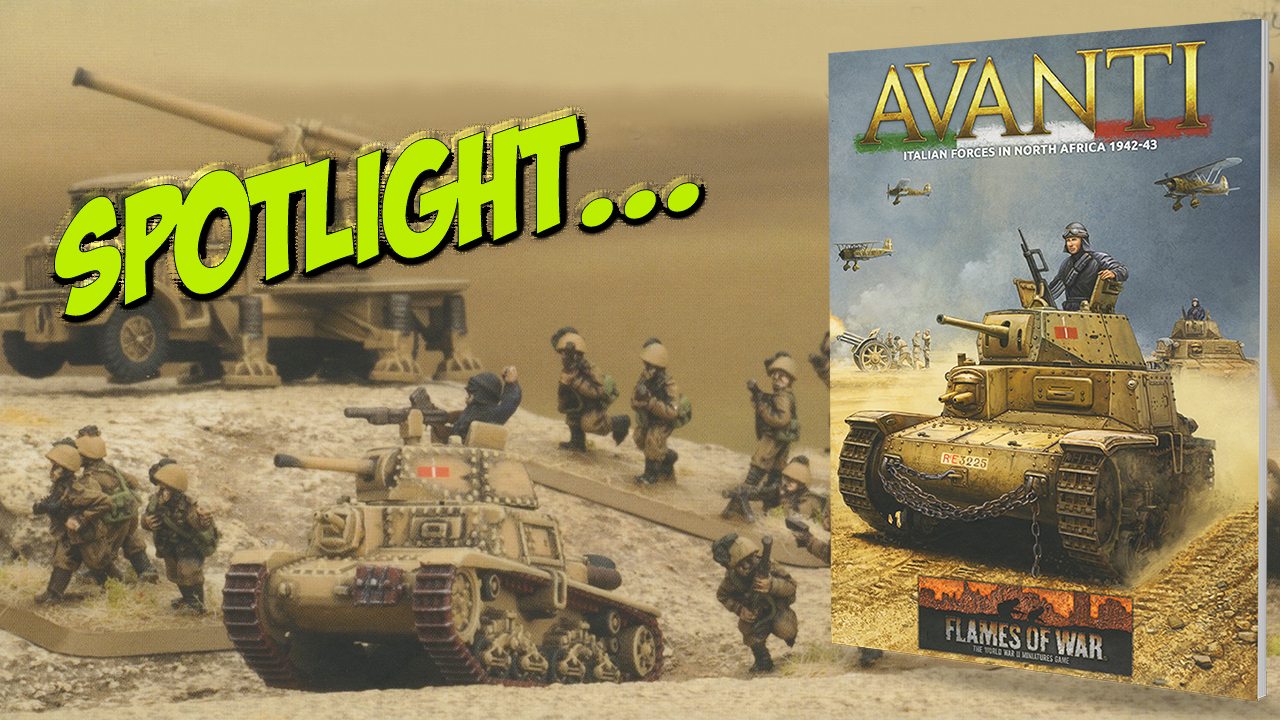 The new Avanti supplement brings the Italian forces into Version 4 of the Flames of War rules system. These are no longer the inexperienced troops of 1940. During the period 1942 – 43, the Italians proved to be able warriors who fought bravely, despite deficiencies in their equipment compared to other nations.

For those who used Italians in previous editions of the rules, the ‘core’ Special Rules are pretty much the same but there are some additions and changes.

The 8 Milliion Bayonets rules has been simplified, with a simple roll of the special dice requiring a symbol result to allow that unit to be fielded as Elite. This is noted on the updated cards, with all Italian troops having two ratings for Motivation and Skill, one for Standard and one for Elite.

Italian forces now have the Determined rule, giving them a better Rally or Remount, Protected Ammo for Tanks which also increase the Remount opportunity and HEAT ammunition for their Anti-Tank assets, which makes your long range shots as effective as those at shorter ranges and, as the Semovente counts as an artillery piece as well as a tank, makes them a much more useful unit for taking out armoured vehicles and infantry alike.

They are also the first Mid-War army to get Flamethrowers, in the shape of the elite Guastatori, the Assault Engineers, who are also Pioneers and can help with clearing the inevitable minefields (desert warfare was full of minefields due to shortages of personnel and equipment to cover so much space).

The opportunities for fielding hordes of tanks have increased mightily. It is now possible to field 16 M14/41s with a HQ and three platoons of five tanks. These are light tanks compared to those they face from their foes but they are relatively cheap and can be used to ‘gang up’ on their enemies, outflanking enemy armour due to their quite rapid movement and with plenty of machine guns to engage infantry. You can also put together three platoons of 6 Semovente mobile artillery pieces, making 18 in total, which may only have a range of 20” but can use HEAT ammunition to go toe to toe with the front armour of most tanks, although perhaps staying at long range is the best tactic here. The Semovente can also fire in Bombardment mode, allowing you to engage infantry forces. Battlefront have released a great boxed set, called Lorenzo’s Rams, which contains 8 plastic kits which may be built as either M14/41 or Semovente.

In that same boxed set are 4 100mm Howitzers, which moves us onto the artillery options. These are capable of both Artillery and Direct Fire, although only into the front arc. Although Slow Firing, they can fire Smoke, allowing the Italian player to lay down both an enveloping bombardment or individual smoke shells as required. The other main anti-tank pieces are a case of ‘little and large’, with the 47mm Elefantino which is attached to infantry units. Unlike the other anti-tank assets, it acts as if it was an infantry team, which means it can fire with a 360-degree arc. An ‘infantry platoon’ of such guns means they fire often, have plenty of shots and all ranges to hit are based upon the base rather than the gun mount. At the other end of the calibre, the 90mm Anti-Tank / Anti-Aircraft gun can be not only mounted on the back of a Lancia truck, making it a mobile ‘tank’ without armour, but can also be positioned on a ground mount based upon the Flak-88 version. Although vulnerable to fire, it does have the option to Dig-In and a 360-degree arc of fire, allowing it to engage any enemy tank in range and then switch roles to provide cover against aircraft attack. Even better, by the time you read this, the plastic boxed set of 2 88mm Anti-Tank guns on ground mounts will be out, as will a host of other releases outlined in the book. Coupled with the first example of a complete Allies list, in this case for German Afrika Korps assets to support the Italians, all in all you have a new supplement for Version 4 which offers examples of a new type of Italian force and a new style of supplement that will hopefully be emulated in future releases.