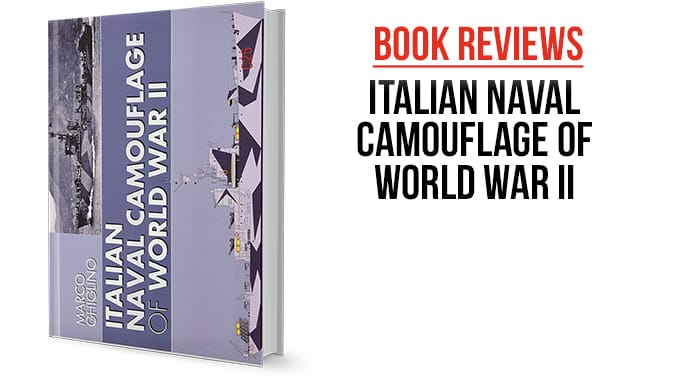 The Germans of World War II were the very worst of allies. It is in large measure due to their vilification of the Italian war effort that we receive such a bad impression of the qualities of the Italian navy. While they suffered from lack of resources and often poor leadership they had more spirit and courage than normally credited.

The Italian navy was starved of fuel by their ally, then blamed for not carrying out operations.

The Italian navy of World War II was blessed with the most spectacular array of camouflage schemes of any combatant. Marco Ghiglino is the expert on this subject. The book is very comprehensive. All types and classes are thoroughly covered. Camouflage patterns are illustrated by hundreds of elevation drawings showing port and starboard views of virtually every ship commissioned by the Regia Marina. This includes not only the operational warships down to torpedo boats, but motor torpedo boats, auxiliaries and ships taken over from other navies. These drawings are presented at a fairly large scale. The scale varies depending on ship size, larger vessels at 1/1000 and destroyers, for instance at 1/900.

One of the peculiarities of ship models, especially the smaller sizes preferred by wargamers is that deck colours are more evident than they appear in real life. To this end Ghiglino discusses deck colours and markings (p10). He gives very specific notes on the famous red and white “barber pole” markings on the bow (and on occasion, the stern).

There are chapters on pre World War II colour schemes and the evolution of camouflage variations including experimental schemes. In many cases, where individual ships received more than one scheme over their, this is documented by more than one set of profile drawings.

These diagrams are richly augmented by many exquisite photographs that not only enhance the understanding of the various camouflage schemes, but provide all sorts of other interesting and useful detail.

Warship camouflage schemes of World War 2 had various purposes, such as to confuse the identification of the vessel type, speed, direction, aspect to the viewer or to make visual range finding more difficult.

This book is a modeller’s gold mine. If you are looking for colour and flair for your model fleet then the Italian navy is a must. For those collecting this fleet for wargames or modelling this book is a great guide to painting. Don’t let the bad publicity put you off.