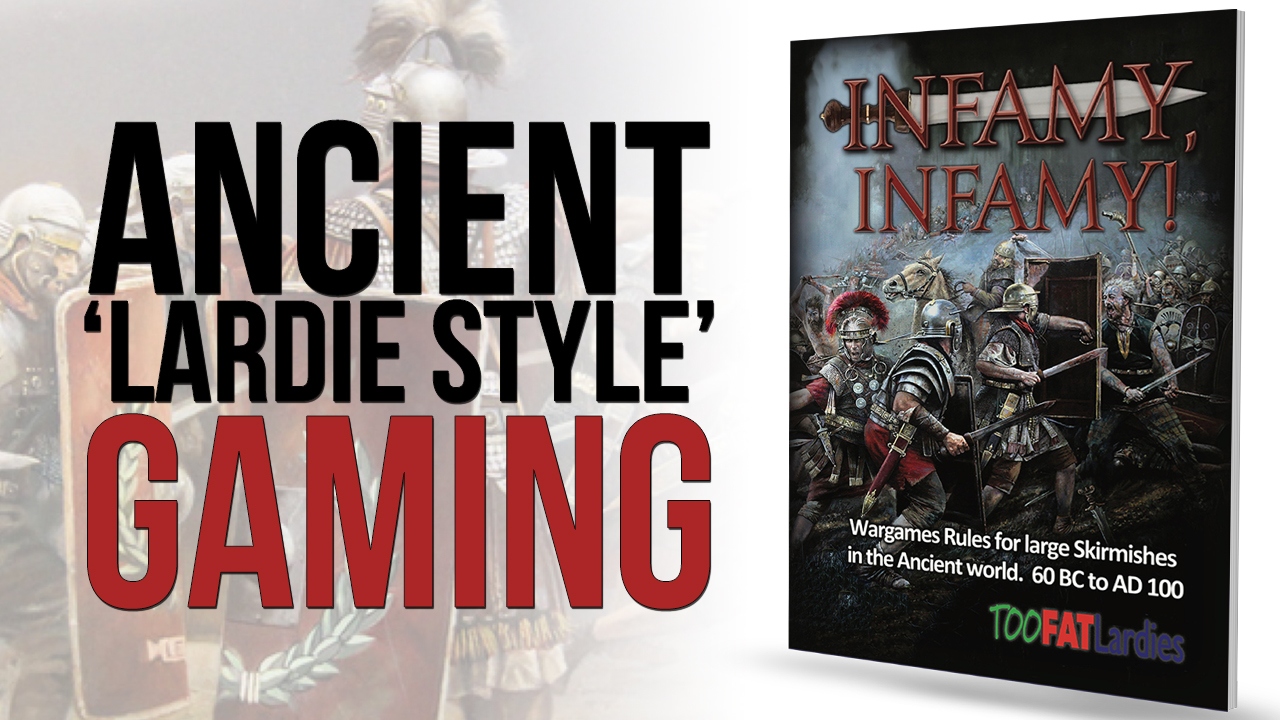 One thing about rule sets from the Lardies is that the titles do make you smile and I was already well disposed toward this publication as soon as I unwrapped it.  This A4 size 104 page soft back rulebook is produced in full colour and is illustrated throughout with diagrams and pictures of games in action which help to explain how the rules work but that also help set the scene.

At the York, Vapnartak show in February 2020 we spoke to John form the Harrogate Wargames Club about their game of ‘Infamy, Infamy’. Watch it here –

Unlike our conventional book flip-throughs, in this video we’re going to flit around the rules and address a particular question pertinent to any new release from Too Fat Lardiers “Is this Sharp Practice for Ancients?”

Well, those of you who have played Sharp Practice – The Lardies Best Selling Black Powder rules – will find a lot that is familiar here. Units are activated when their chit is drawn from a bag, or their card drawn from a deck, whichever you prefer.

As well as unit cards there is also that damned frustrating end of turn card, or ‘Tempus Fugit’, which can end a turn whether all the units have activated or not.

Leaders still have levels of command which affect how many orders they can give their men and they can influence their troops using their command initiative or by use of the flag cards, or in this case, the “Signa” Cards, to make their men move a little further or fight a little better.

The players begin the game holding six ‘signa’ cards that, when played, also allow them to use special abilities, such as throwing pila, or to activate units that failed to activate that turn. When these are played they are then shuffled back into the deck and may appear again over the course of play, but players would be foolish to throw these away too early on.

Moving, shooting and fighting are pretty straight forward, with units either taking models as casualties or more usually taking ‘shock.’ The build up of shock reflects the slow deterioration of the units fighting ability and when shock is double the number of the remaining figures in the unit then it is usually all over for them. Officers can rally units to remove shock and hence prevent them from routing.

Included at the back of the rules are army lists for the Imperial and Republican Romans, Germans, Gauls and Britons. There is also a simple campaign system that allows your Leaders to grow their reputation, gain a retinue and climb the greasy pole to success. In short, if you already play Sharp Practice then these rules will be easy to pick up.

Infamy, Infamy is however a very different game, both in atmosphere and in the way it plays. Designed to replicate ambushes and skirmishes on the frontier of the Empire, the deployment at the beginning of the game relies on scouting and ambush points, a nice touch that ensures this is not a “line em up and charge” style of game. The Roman player will never really be sure where all the Barbarians are going to appear from and will have to be constantly watching his flanks. The really clever parts of the rules are in the detail. Roman soldiers are drilled and as such can usually respond to changes on the battlefield. Special abilities such as ‘Rallying Back’, filling up ranks when casualties are inflicted or interpenetrating friendly units really gives you the feel of a well disciplined group of men even at this small scale.

The barbarians, on the other hand, need to generate ‘Fervour’ to be really effective in combat and this takes time. Spend too long winding up your men and the opportunity to attack may be lost. If you don’t spend long enough, they may not have the power to punch through the Roman line.

I was particularly impressed with the rules for chariots. In many rules chariots are dismissed as rubbish light cavalry, but in this set it is clear that the Lardies have really thought about how they were used historically.  In Infamy they can be used to drop off heroes to take part in melee but they can also be used to fall back on for a quick escape. When used to gallop past the Romans, hurling javelins, any success adds to the Fervour of barbarian units watching, simulating them being inspired by the actions of their Heroes and leaders.

The scenarios that are included in the rules are not stand up fights but take the form of raids, ambushes and rescue missions, and the inclusion of Infamy cards mean that the players may have alternative objectives to the obvious.

We really liked these rules. The Lardies have crammed a lot of game into these 100 pages and it is clear that they have worked hard to make the Romans and Barbarians distinctive and different, both in the way they appear and perform on the wargames table.  The campaign system and the ability for Leaders to progress and gain a retinue is a great idea and the whole package makes for a great ancients skirmish game.