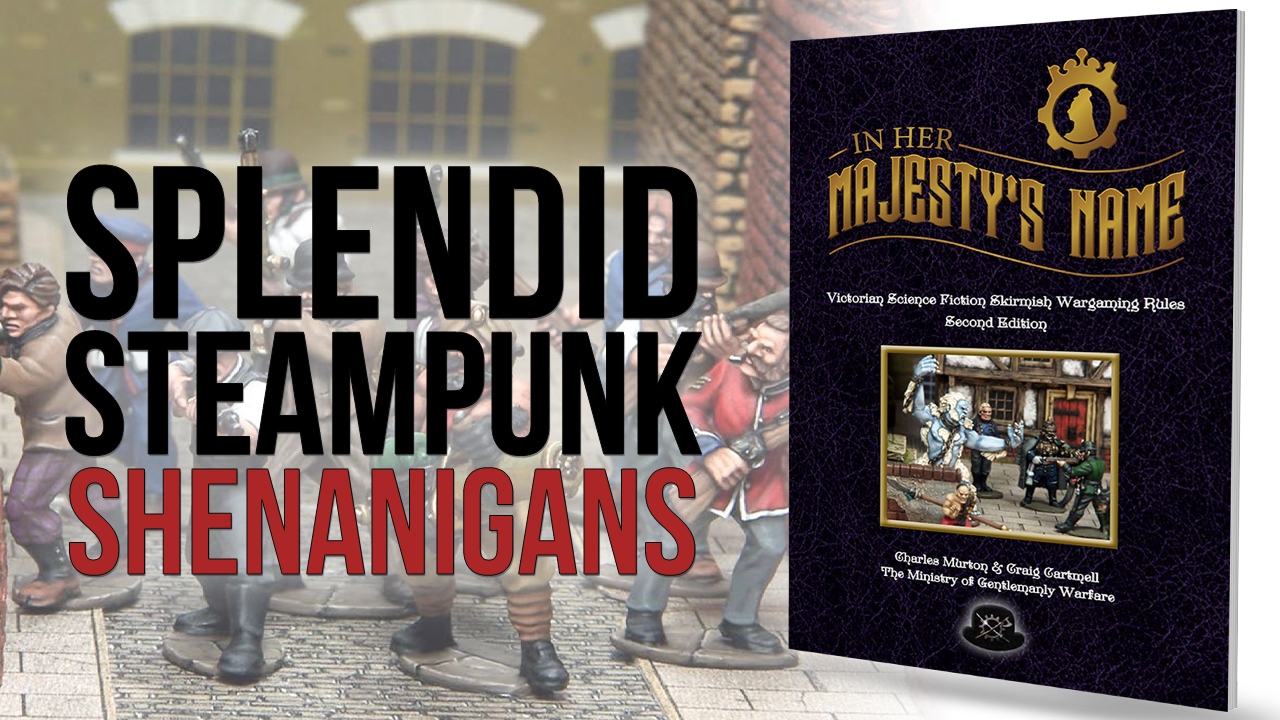 More than ten years after it first hit tabletops the steampunk skirmish game, In Her Majesty’s Name, is back and it’s a heavyweight. This chunky, A4-sized, full-colour, hardcover book contains 200-pages and Charles Murton and Craig Cartmell (AKA The Ministry of Gentlemanly Warfare) have refined and condensed a decade’s worth of content and game testing.

When the contents take up four pages at the front of the book you know you’re destined for a lot of rules and extras. Thankfully each section gets sub- and sub-sub-section values making quick reference a doddle.

Through the Introduction the basic conventions are covered, then the game’s Golden Rules – essentially how to play fairly and in the proper character of the period – are listed. Figure Characteristics is section 2, briefly touching on model attributes (greatly expanded on later) before section 3 gets into the core of Playing the Game.

The basic play system remains much the same, but there are refinements aplenty that we’ll get to later. Players still alternately activate models, based on initiative; move; resolve shooting and fighting actions with modified D10 rolls; use Pluck rolls to determine who survives attacks, and play the chosen scenario out until objectives have been achieved.

And we did just condense 20 pages of core rules into a checklist, but there’s a lot to cover – hopefully, you get the basic idea and there’s much fun stuff still to discuss! It’s quite a simple ruleset at its core, but the fun comes through the sheer variety of options that are to come.

Setup remains much the same too, covered in The Playing Area, which is section 4. The board has different terrain types which not only impede movement but can be a threat. Thin ice or lava can cause harm and there may even be active terrain – panicked animals, a mudslide, moving locomotive, and so on. There are even rules for sea battles and wind rules for aerial combat.

We’re 40 pages in and you’ll have seen that the layout, on the whole, looks good and functional, with some inspiring in-game photographs bringing flair. The many tables are very clear too. We’ll do our best to overlook the rather too cliché multitude of cogs that take up the background on every single page!

Section 5 is The Armoury and it’s a weighty one. In Her Majesty’s Name has rules to cover varied armour types and encumbrance, page after page of weapons – shooting, fighting, grenades, shells, bombs, flame, and more. There’s equipment from the mundane to the weird and wacky (who doesn’t want Fontwell’s Fascinator in their life?).

Section 5.4 is Vehicles and it’s here that the first really major overhaul of the rules is present. The authors have gone to town, adding many refined rules for every kind of vehicle you could possibly want. This was something a little lacking in the first edition and its expansions with lots of muddy areas. Not so any more!

General rules are covered, then there’s everything and the steam-powered dishwashing sink thrown in – land vehicles, water vehicles, and air vehicles comprise of 35 different options – animals, sail, steam, electricity, and more with their own particular properties. They may be that they are buoyant (so act as if they have a Swimmer talent), gastight (making them immune to gas attack), have a ward (a mystical type of protection), and so much more. The Land Vehicles table alone contains delights such as Steam Elephants and Electric Cycles in its listing.

The Mechanised Walkers section is a whole extra steampunk treasure box and gifts players with a barrage of customisation options for walkers, starting from the chassis up. There are different armour types, properties, types of crew, and equipment to fix onto the hardpoints on the chassis, which all vary the way the walker functions. Examples are given of existing walker types and illustrated with some fine-looking miniatures, but there’s also a point cost calculator should you wish to design your own.

We told you there was a lot to get into, didn’t we? Well, onwards! Section 6, The Menagerie has tables of standard animals – horses, dogs, cats, snakes, even hippos; exotic creatures (wait, hippos aren’t exotic?) – great apes, sea serpents, lesser demons, mummies (ah, we get it!); and automata – golem, zombies, mechanical soldiers, etc. It’s all really fun!

Section 7 brings a great many talents to the game. Some of these are fairly standard – Dodge allows a Pluck roll to be made with a modifier, to attempt to evade an incoming shot. Others are far more unusual – Eyes in the Back of the Head makes a model immune to being Outnumbered or having the Mobbing rule used against it. Are those mechanical or real eyes? Well, that probably depends on the company you’ve chosen to play as.

If they’re real eyes, then your company and its models probably also have access to the Mystical Powers covered in section 8. These take the game into the supernatural with two grades of power – Lesser and Greater. Fun options like Gremlins (unleashed in the sealed space of vehicles and structures) are the sort of silliness that shows you the game doesn’t take itself too seriously. It’s all the better for that. There’s a good dose of pulp and a hint of camp to proceedings.

And now, at page 95 and section 9, we reach the weightiest portion of the book – the Companies. There are actually fewer here than have been created in the lifetime of the game and its various supplements, but with 23 on offer, we don’t think anyone’s going to begrudge the authors from holding some back.

The 23 included cover a good range of pulp possibilities, steampunk shenanigans and Victoriana tropes – a gloriously wild mix that it would be impossible to do justice to in a quick tour flipthrough. So, we’ve got another video that focuses on the Companies. Huzzah!

Suffice it to say that there’s enough to keep you flipping the pages of the book for many hours as you try to decide which to pick. Whether you go for the revolutionary upstarts of the Brick Lane Commune, the twisted magic of the Hellfire Club, the stealthy threat of the Ninja, or Scotland Yard’s Q Division, you will find that gameplay is quick and easy thanks to the now much-refined rules, skills, and layout. There’s even a sub-section at the end here that guides you through creating your own Company.

Section 10 covers the Scenarios your Company will play through – 15 in total, delivered in a concise way and covering the rescue of a VIP, an escape from certain doom, a hunt for a mutated lab experiment, a bar fight, a pigeon capture attempt and more.

You can add some complications to your games. These are environmental effects like rain, darkness, and earthquakes; hazards such as crumbling ruins or traps; and NPC opposition like armed civilians and authority figures). Various landscapes are covered too. The sort of stuff you’d expect – steampunk classics like the city streets, canals, and slums, but more unusual overseas options feature, such as India’s Teeming Cities or Peeking’s Forbidden City. You can fight it out in rural areas, ancient landscapes, on giant vehicles like the Hindenburg … it’s a lot and it’s great.

This is the book In Her Majesty’s Name deserves – it offers existing players a much-refined version of the game they love and will be a brilliant, easy to use, inspiring starting point for anyone venturing into this genre for the first time.