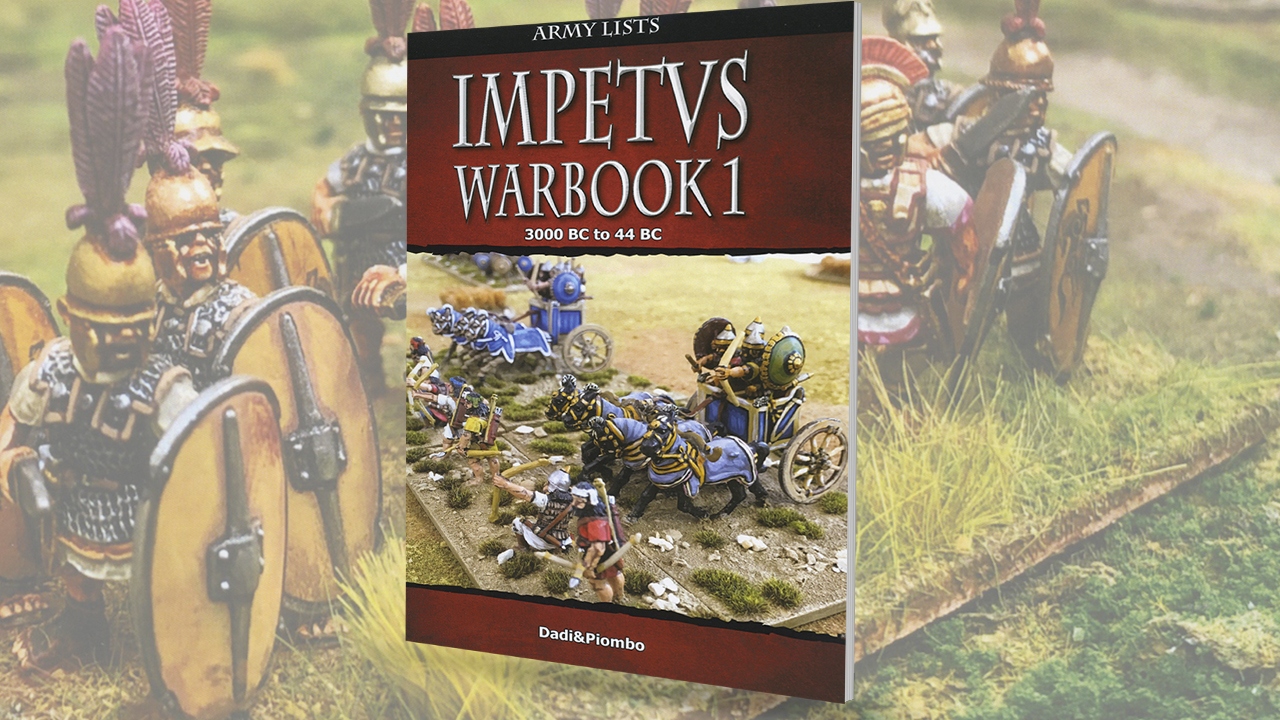 3,000 years is a long time! Any book trying to map the armies and warfare of such a wide period is showing a level of boldness that is to be admired. That’s what this Dadi & Piombo published book attempts to do in this softcover, spiral bound, 66 pages expansion for Impetus Second Edition … Wait, 66 pages? And the army lists themselves don’t start until page 11? That’s less than a page for every half-century. Let’s take a look and see how they’ve gotten on with such a monumental task!

A little background first. If you’re not familiar with Impetus, it’s a flexible ruleset made to simulate battles across Ancient, Medieval, and Renaissance periods, and it is playable at all scales. Previously, army lists were available in supplements called Extra Impetus, but this new Warbook brings together (and this is rather absurd in a good way!) no less than 97 army lists for Impetus Second Edition, covering much of the Ancients period.

If you don’t have the rules, you’re not going to understand a whole lot in this book, so we’re not going to go into deep detail. Rather, let’s just peep at humanity’s ‘progress’ in war, starting with …

… The Age of Bronze

It entertains us that the most BC of all the Ancient forces here – the Early Sumerians – starts their list with the Mad Max sounding ‘battle cars’ entry. Have no fear, this isn’t actually a Gaslands expansion, it’s referring to the unrefined Sumerian chariots!

This entry (like the others) takes up just one line in the book, meaning the army as a whole is listed in just a third of a page, along with minimal Notes & Options.

Entries consist of the standard stats – The Minima and Maxima (number of Units that can be fielded), the type, VBU (value), I (Impetus bonus), D (Discipline), VD (Demoralisation value), Weapons, and Cost. Costs are shown with reduced costs for rear ranks and lots of abbreviations are used in these profiles, even beyond the names of the initial stats.

This is a game that uses shorthand to include a lot and maximise versatility, but becomes a tad inaccessible because of it, and it’s true in this book too. New players will need to quickly get used to their battle cars having a D of C!

What this brevity means is that the book’s Age of Bronze section features enough armies to keep the most indecisive hobbyist happy. From Sumerians to Nubians, Libyans to Hittites, Mycenians to Babylonians, the range of troops and simple flavour elements worked into the units is impressive. The last entry for the Age of Bronze is the Early Hebrew list, covering the Israelite armies until the ascension of David, then it’s into …

… The Age of Chariots

19 armies down, lots to go! The lists touch on some fairly obscure factions, such as the largely unknown raiders the Sea Peoples 1200-1176 BC. The book is clearly rather completionist. From the Kallapani battle cart to Sargonid Assyrian heavy chariots, there’s a lot of variety being delivered through Impetus’ simple stats. We obviously can’t give you a full report on how things work in a game, we can’t even begin to imagine how much playtesting time had to be put into all of these lists.

Into Early Athens and its hoplites, we are in what the book calls …

… The Age of Hoplites

Some of the more iconic Ancients arrive here –  the Athenians, Spartans, Thracians, Early Persians… The lists look to represent variations in the different nations’ approaches to war as well as digging into the variety found within singular regions – as Minor Greek Cities, Ionian Greeks, Thessaly, and Magna Graecia all get individual lists.

Volume 4 (each period is listed as a volume) is …

… Alexander the Great and Successors

Once more the armies covered are broad. Classical Indians bring Elephants to war, Alexander’s Macedonians get a whole page to themselves, and various successors after Alexander’s death also feature (Antigonus, Ptolemy, Seleucus I Nicator, etc.)

69 armies down now but there’s more to come with …

From the Etruscan League to Early Republican Romans, the face of war has changed, with Legions becoming more rigid elements of armies.

The enemies of Rome are present, as you’d expect, and again, basic rules (such as Gaul’s Warriors and Soldurii able to form Large Units) add to the flavour.

The Middle Republican Romans get a hefty entry, with options for various Legions and Contingents. The lists finish with Sertorius’s Lusitanians, and their short-lived rebellion against the Roman Senate.

This is a book bursting with gaming options. While the lists and profiles are relatively simple there’s a good bit of variety in these refined entries, with enough historical flavour to sate the appetite of the hungriest Ancients collector.