Images of War: With Rommel in the Desert 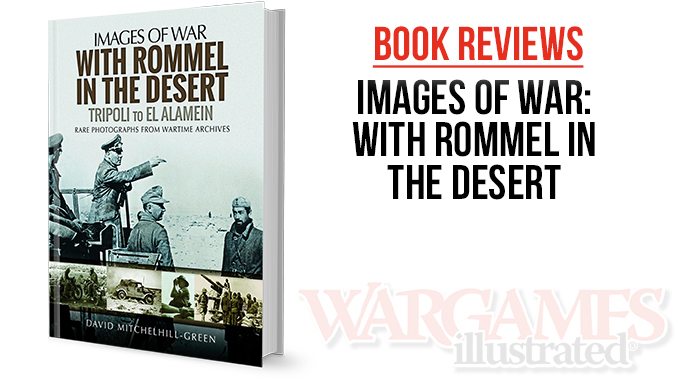 Images of War: With Rommel in the Desert – Tripoli to El Alamein
By David Mitchelhill-Green, 2017
Pen and Sword Military
Reviewed by Dom Sore

The Images of War series from Pen and Sword is a collection of books that is rapidly growing; currently there are 172 of them with more promised. This one covers the period from the arrival of Rommel in command of the Deutsches Afrikakorps (DAK) until the second battle of El Alamein with a short section for the remainder of the fighting in North Africa. Many of the photographs were taken by the troops themselves, as well as by official photographers, and were often used for propaganda purposes. With 216 pages and comprising mainly of photographs, this book tries to show the conditions the DAK operated under.

The book is neatly divided into chapters, covering various aspects of desert life and campaigning. The chapter ‘Tourists in Uniform’ is enlightening, showing German troops acting very much like modern-day tourists albeit in extreme circumstances. There are hundreds of photographs, with little details popping out the more you examine them. Page 129, for example, has five ‘battle’ photographs that show explosions in the distance because this is often all a soldier would see of the actual fighting, this being a mainly mobile, long-distance war.

With Rommel in the Desert is a German-centred book, which is unfortunate as it effectively ignores the Italian contribution to Rommel’s battles. Their contribution was not always successful, but to concentrate nearly exclusively on the German troops is to continue promoting some of the myths of war. The book is light on text by necessity and design: there are descriptions accompanying the individual photographs but a little extra strategic context would have been welcome. It is also a book that needs an index, especially for the various vehicles incorporated in the DAK; I suggest you mark the pages you are interested in with sticky notes!

This is a book to browse and examine rather than ‘read’ and is also useful as a reference. For the gamer, it is liable to provide inspiration for modelling your forces and dioramas rather than produce potential scenarios. There is great scope, however, for building real-life inspired command dioramas for smaller scale games such as Flames of War, Spearhead, or Blitzkrieg Commander. I will opt to have a captured AEC Dorchester along with a Horch Heavy Field Car for my Bolt Action force, but calling them “Moritz” or “Max” (the names given to two of them by the Germans) is undecided as yet!