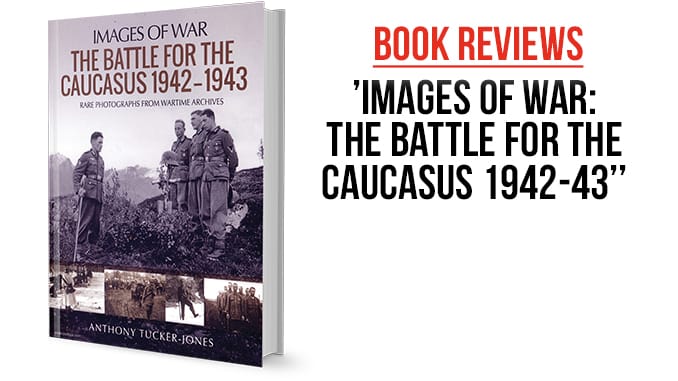 Images of War: The Battle for the Caucasus 1942-43
Anthony Tucker-Jones
Pen and Sword Military
Reviewed by Jack NGH

As I open my review copy of ‘’Images of War: The Battle for the Caucasus 1942-43’’ I am immediately struck by the quality of the book itself; the written portions of the book are cleanly laid out with no clutter and a font which is easy to read and large enough that it can be read without difficulty even at a distance.

The photographs have been reproduced with no expense spared and one can see that there is no loss of detail from the original photos with readers easily able to pick out the individual details of the uniforms of the soldiers that frequently feature in many pictures.

Moving on to the content itself, it consists of an introduction plus eight chapters on the German attempt to secure the Caucasus oil fields of Baku, Grozny and Maikop, from the planning stages right through to the ignominious end in a fair amount of detail.

Interspersed throughout is a generous selection of photographs depicting both German and Soviet forces at rest and in action, the author has (in my opinion) wisely chosen to not just focus on military matters with scenes of civilian life, picturesque landscapes and even Soviet propaganda attempts in the form of posters, monuments and statues (both intact and toppled by the Axis invaders).

In terms of wargaming potential there is also much to recommend, along with depictions of both sides in great variety there also feature plenty of pictures for the budding terrain builder to reference, all of this combined with the background information should provide plenty of inspiration for the wargamer seeking to play scenarios both during this lesser known operation as well as on the Eastern Front in general.

All in all, looking at both its content and price I would recommend this book both in general and especially to any wargamer with an interest in the Eastern Front.