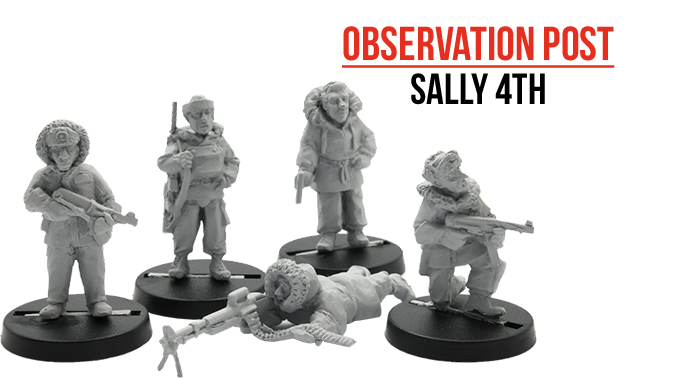 Sally 4th continue to add to their “Classic Movie Miniatures” range, with the addition this month of “Ice Station Zebra”- sorry, “Ice Station Zulu”, if there are any copyright lawyers in the house. This classic movie from 1968 is based in the arctic, where Russian and American forces try to recover a downed space capsule containing a top-secret roll of film.

The first pack sent for review contains miniatures depicting the cast: Rock Hudson, Ernest Borgnine, Patrick Mcgoohan and Jim Brown. They are depicted in their classic winter weather gear and appear pretty much as they did in the movie. The sculptor has done well to make the miniatures look like their movie counterparts and each character is clearly identifiable, even down to Ernest Borgnines figure clutching the secret film canister. Given they are wearing parkas and have little other kit, they should be very straightforward to paint up and the detailing on the fur hoods is ideal for dry brushing. All the miniatures in this range are at the chunkier end of 28mm scale, with most of the ones sent for review measuring a tad over 30mm.

Next up are two packs of American forces, or “Snow Patrol” one and two. The first pack contains four American soldiers in winter weather gear, including beanie hats and, on one model, goggles. The only thing that makes them identifiable as American is the M16’s they are carrying, so they could easily be adapted to represent a mercenary gang or the guards of a Ice Station based villain. The miniatures themselves are well cast and detailed, with my only issue being that they are all in standing poses, but then I suppose they are guards! The second pack is my favourite, with the miniatures clearly involved in a fire fight. One is standing firing, one kneeling firing, whilst two are prone, one with his M16 and another with an HMG. I particularly like this pose, with the soldier feeding the belt of ammo with one hand as he fires with the other. The miniatures are sculpted with no kit, just their parkas and weapons and so again should be straightforward to paint. Although this is how the US forces appeared in the movie, purists might look for them to be carrying at least webbing pouches for spare magazines, although in Hollywood, no-one ever runs out of bullets.

Away from the men on foot we has a ski-doo, which is a mix of resin and metal – a resin body and metal skis, handlebars and driver. The driver is wearing goggles and, not surprisingly, is kitted out for cold weather. This model could easily fit in to any of your games set in snowy climes.

The final two packs are of Soviet Paratroops, who dropped in on Ice Station Zebra at the end of the movie to secure the lost canister. The first pack has the paras in standing poses, wearing cold weather gear and classic Russian hats. Again, this is exactly as they were depicted in the movie, carrying PPSh machine guns with straight magazines and very little extra kit, with one of the miniatures being an officer, or NCO, carrying a map pouch. The second pack again contains one standing firing, one kneeling firing and two prone soldiers, one of whom is firing an HMG.

I would understand if the lack of webbing pouches or other kit would put you off collecting these miniatures for general use as “Cold War” era arctic warfare types. However, Sally 4th have been true to the movie here, the clue being in the title, whilst the lack of kit actually makes these figures very easy to paint and provides lots of flat areas of coat for you to practise painting your arctic camo patterns. This range also comes with a downed space capsule, snow vehicles and even a Submarine Conning Tower sticking out of the ice, so there really is no reason not to get started on your arctic adventure game.

One last model (just!) received from Sally 4th and moving away from Ice Station Zulu ‘The Gyrocopter’ is unashamedly based on “Little Nellie” used by Sean Connery in “You Only Live Twice”.  The body of the copter is resin with metal wheels, tail fin, rotors, pilot and all important rocket launchers! A machine gun has also been sculpted into the body of the copter, just in case you need some extra firepower to bring down those enemy flyers. The model is easy enough to put together and sturdy once completed, allowing it to stand up to repeated handling by five thumbed wargamers. I haven’t tried it, but I imagine the resin body of the model could be drilled to take a clear plastic flying stand, which is how it is displayed on the Sally 4th website. An excellent little model for all you Bond fans.