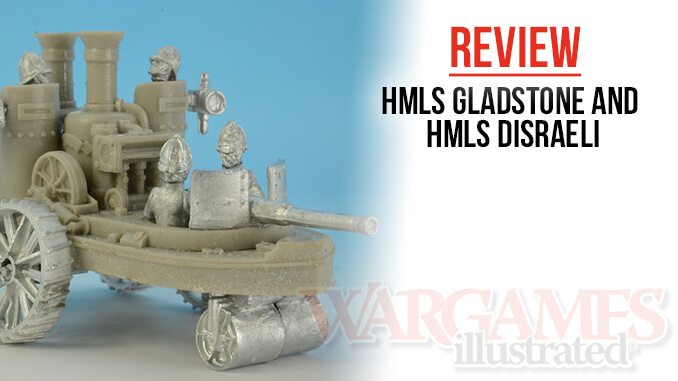 MANUFACTURER: West Wind Productions
RANGE: Empire of the Dead (Steampunk Machine, pack #MOTD-09 and #MOTD-10)
SCALE: 28mm
SIZE: Not mentioned, but should be 1:55 Scale as that equates to 28mm for vehicles, though crew figures are about 25mm
Review by: Bob Giglio

For review purposes, a complete HMLS Gladstone (MOTD-09) was sent along with the enclosed turret of the HMLS Disraeli (MOTD-10). Since the two models are the same except for the turret, this review will cover both as one.

Each kit represents a Land Ship with turret weapons for the Victorian Science Fiction (VSF) and Steampunk period. Each kit includes one gray resin piece that represents the hull – the major part of the vehicle – and includes a double-boiler/stack steam engine. The kits also include separate metal pieces that are common for each vehicle: 2x gas lamps, a spur of 4 pith helmet heads, 2x pairs of traction engine wheels with 2x axles, 2x front ‘rollers’ (which together form one roller wheel), plus the armament parts. For the HMLS Gladstone armament there is 1x open barbette with gun carriage, 1x gun barrel with shield, and 2x crew upper half-bodies. For the HMLS Disraeli armament, the barbette, gun, and crew are replaced by 1x enclosed turret, and a small weapons spur (2x Gatlings, which can also be used as Teslas).

The HMLS Gladstone barbette gun carriage is open, but the gun has an angled front facing shield to protect the crew, having a crewman on each side of the gun (the gun can easily represent a 3-inch breechloader type). The HMLS Disraeli enclosed turret is more traditional, being similar to early nineteenth century armored cars, but has two separate (though adjacent) ports for weapons, and an open top hatch. The hatch has view ports all around, but does not have a hatch cover, and since the view slits come filled in, they would have to be carefully cut open.

For the HMLS Gladstone, the two separate upper half-bodies (neck to waist) of crewmen are intended to be glued to the lower half-bodies (legs) cast as part of the open barbette gun carriage, and a separate head glued on top. The four crew heads provided all have the same faces without facial hair and wear a pith helmet with helmet strap at the chin. Two of the pith helmet heads would go atop the crewmen working the gun of the barbette gun carriage; for the HMLS Disraeli enclosed-turret, one of the pith helmet heads should be placed inside the open hatch to represent a crewman. For both kits, the other two heads are for the two crewmen whose bodies are cast as part of the resin vehicle base on each of the steam engine; each crewman is standing behind an armored shield (with a view port), the shield only offering protection from the front and partial side facings.

The pith helmets are standard for the British colonial period, but have molded emblems on the front. This is fine for home service use, but if you want to use the vehicle on campaign (as noted for the Zulu War on the company website) or on Mars, then the emblems should be filed off, as (historically speaking!) such superfluous items were generally discarded for the field. In addition, helmets on campaign would be the white versions (not blue as for home service use) and often tea-stained instead of white.

The vehicle is not fully armored like a traditional armored car or tank would be in WWI, as the armor only really protects the crew. The HMLS Gladstone barbette gun carriage and other parts are only generally forward (bow) facing, the exception being the enclosed turret of the HMLS Disraeli is fully protected. The main body of each vehicle would be quite susceptible to damage if hit from the side or the rear (exception being the enclosed HMLS Disraeli turret), but that makes it great for gaming balance, as an enemy (especially one that does not have armored vehicles) would have a chance to take it out as opposed to some big fully-encased iron clunker.

PROS: The detail on the resin body of the vehicle, especially the steam engine part (which has two boilers with separate exhausts) is superb and crisp, with no real discernible cleaning of mold lines required. The metal pieces are also nicely detailed. Though being metal, naturally, they require more cleaning, but this is not excessive.

The design of this vehicle is unique. It would be a great addition to any VSF/Steampunk or alternative Victorian game, as it is very different than the (mostly) boring and unimaginative WWI look of some VSF vehicles currently available from other companies. The use of the big tractor-style wheels is historically apropos to the tractors used during the Boer War to bring ammunition and pull artillery pieces. I really love the look of this VSF/Steampunk vehicle, and cannot say enough about how nice and refreshing the design is.

CONS: There were no instructions describing how to assemble the pieces included. However, in going to the company website, one can generally discern the positions of the wheels, roller, and such, so this is easily addressed. For the open barbette gun carriage of the HMLS Gladstone, the upper half-bodies of the two crew figures do not have extended nubs for placing in the holes of the lower half-bodies cast on the resin piece. I think was an oversight, but does not really affect putting the figures together.

While I do think that the open hatch on the HMLS Disraeli enclosed armored turret should have been provided with a cover, it does work as is, as the rest of the vehicle is relatively open, allowing one to get easily to the crew in the turret. This is, however, a missed opportunity to allow for the option of either an open or closed turret by including a cover.

The very big negative for this piece, is its size as compared to both other 28mm figures from the same line and other VSF/Steampunk vehicles currently available from other companies. No scale was given for this model, though since it is part of a 28mm line we must assume it to be 1:55 scale (5.5 mm = 1 foot scale). In the military modeling and wargaming world, 28mm scale (the height of a 6’ tall figure) is a close match for 1:55, even though many 28mm figures are closer to 30mm scale.

This vehicle, therefore, is undersized for 28mm. It should have been about 33% or even 50% larger (width/length/height/thickness/etc.). This would give a much better believability of the visual appeal of the gun crew actually sitting down inside the open barbette carriage of the HMLS Gladstone. When placed next to one of the West Wind ‘Empire of the Dead’ human figures, the crew figures included with this vehicle measure out to be about 25mm and just look too small.

My idea of a VSF/Steampunk vehicle is that it needs to be big and clunky, in order to get the proper ‘feel/look’ for the period on the tabletop. This vehicle is a bit ‘cute/small’, which unfortunately tends to be a common design problem for many company’s vehicles. When scaled with compatible figures found even within even from the same company, vehicles often end up being smaller than what they should be.

This vehicle, visually at least, looks like ti would fit better for 1:72 or 20mm. Sadly, this and other West Wind ‘Empire of the Dead’ vehicles, such as hansom cabs and carriages, are undersized for 28mm. Due to the uniqueness of this line, a 1:55 scale would be welcome and appropriate for the VSF/Steampunk range. Going slightly oversized with vehicles for this genre, while not to scale, would be more visually acceptable than would undersized vehicles. Adding a bit more to the size/bulk of the vehicle would naturally increase the cost, but that would be acceptable given that it is a vehicle and you would not really have many of them on the tabletop, anyway.

Now, while the size of this vehicle might be a bit smaller than one would like, it could still work well enough, provided that you mount it on a thick movement base to help cheat-up the size to the eye a bit. I would also cut a half-inch wooden outline to fit under the deck of the vehicle, to add thickness to it as well.

SCOPE: This vehicle would be a very nice addition to any VSF/Steampunk or alternative Victorian game, as I noted above under the ‘Pro’ section – it is a unique and clean design – but as noted under the ‘Con’ section, it is undersized for 28mm, if that matters to you.