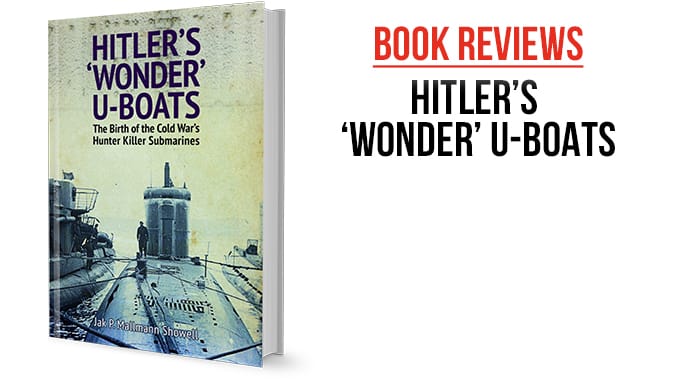 The ‘Wonder’ U-boats of the title are the type XXI (ocean going) and type XXIII (coastal) electro boats built by Germany in the last stages of the Second World War. Diesel electric submarines, they were the first submarines designed on the principle of staying submerged for the majority of the time, and as the author points out were thus the predecessors of the Cold War’s non-nuclear ‘hunter killers’. To this end they possessed the then revolutionary ideas of streamlining, innovative schnorkel designs and an array of technical improvements over other submarines of the period. All of these are covered in some detail within this book. The author is well versed in the subject, witness his previous works on German naval topics, but unfortunately like many experts, he forgets that his readers might not be as knowledgeable and does not always fully explain the more obscure terms and procedures involved. Rather than being a narrative on the evolution and operation of these boats, this book is closer to being a technical manual detailing the conditions under which they were designed and manufactured, the processes involved in their assembly and the problems encountered with their commissioning and operation. That is understandable given that the majority of information for it is gleaned from U boat log books and technical reports, it does not however make it a ‘dry’ read, rather it serves to illustrate the immense difficulties under which these boats were produced and commissioned. The book is well illustrated with contemporary photographs and line drawings, many of which are taken from the technical documents of the day. Overall this is not a book for the wargamer looking for logs of combat cruises and first hand submarine actions to spice up their gaming encounters (only two combat cruises were undertaken by these boats with limited effect), rather it caters to those interested in the logistics of submarine operation and their construction, and as such can only be recommended for those with an interest in the subject.