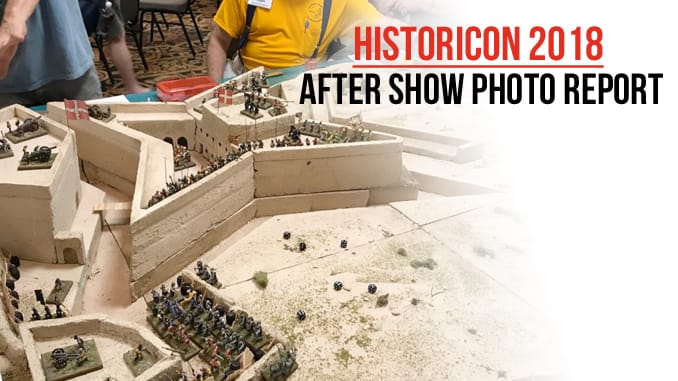 We’ve just got back from The Host in Lancaster, PA, the venue for Historicon 2018 and we thought we would share some of the action from the convention (any beyond!) in this photo feature.

You can read a full report on the show in WI371 – the September issue of the magazine and see all the best entires from this year’s Painting Competition in WI372, October issue.

The Siege of St Elmo, Malta 1565. Presented by Doug Fisher

SEE MORE OF THE BEST GAMES FROM HISTORION 2018 IN WI371, SEPTEMBER COVER DATE

Two of the judges hard at work – Christin and Brad

The Perry Twins judging the winner of the Best of Show.

SEE THE WINNERS OF THE 2018 HISTORICON WI/HMGS PAINTING COMP IN WI372, OCTOBER

MDF Building by Things from the Basement. SEE MORE FROM THE VENDORS AT H’CON 2018 IN ‘SPOTTED AT HISTORICON’ WI371, SEPTEMBER

After the show we headed off on a mini battlefield tour with our travel companions Alan and Michael Perry and Nick North Star. Here they are walking along ‘Bloody Lane’ at Antietam.

Editor Dan and Alan Perry take up positions on Little Round Top, Gettysburg and fend off the rebels.

An accurate reenactment of the high watermark of the Confederacy.