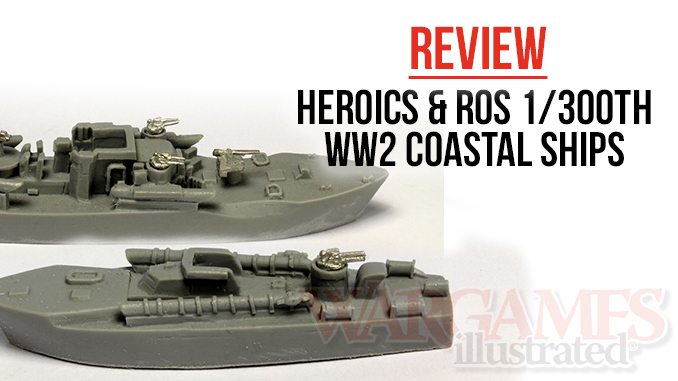 Review and photos by Paul Davies

Already well-respected for their extensive ranges of 1/300th figures, aircraft and micro armour, which have been expanding rapidly under the new owners, I suppose that it was only a matter of time before they turned their attention to 1/300th naval.

As someone with an interest in WW2 Naval Wargaming, particularly coastal warfare, I was very interested to learn that Heroics & Ros had released some WW2 Coastal vessels in 1/300th and immediately ordered a small selection; a Vosper 70’ MTB (NCL13), a Fairmile ‘D’ MTB (NCL14), and two German boats; an early ‘E-boat’ S7 (NLC31) and a later version S-38 – S100 (NLC32).

All the models consist of a good quality resin hull, with various weaponry cast in white metal.

The photographs show the models exactly as received without any cleaning up and demonstrate the generally good quality of the components. I have only one small negative comment and that relates to the Late War ‘S-boat’. For some reason the forward mounted 2cm MG Flak gun (Drehkranzlafette) is cast as an integral part of the hull which necessitates a ‘web’ of resin between the barrel and the deck. In my opinion the model would have been improved if the gun had been cast as a separate white metal item. It IS possible to cut the web away, but it needs care.

But this is a minor point, and at only £4 each these models represent very good value, being only £1 more expensive than their 1/600th scale equivalents. As supplied, they’re ready for the wargame table, but I can see a lot of wargamers and modelmakers adding extra detail to create some very fine looking models.