Hellboy The Board Game 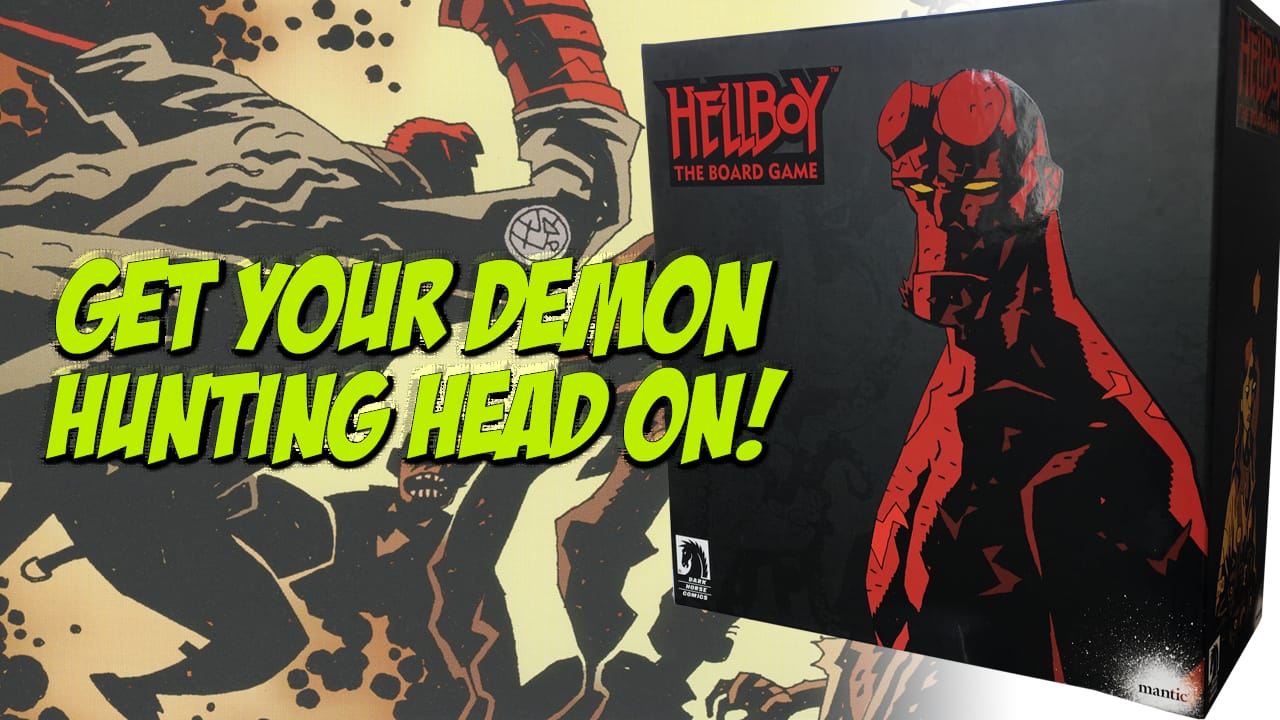 Mantic Games had some copies of the retail version of the new Hellboy The Board Game for sale at Salute 2019. Although the Kickstarter version on display contains much, much more (you lucky people!), this general release version is packed with plenty of gaming goodness. Based upon the comic book rather than the movies, this is Hellboy at its purest.

Once you lift the lid of this hefty, heavy duty cardstock box, you first come upon two very important sources of information, a tutorial pamphlet entitled ‘Turtorial – Read this First!’ and the main rulebook. The pamphlet is an 8-page basic guide to the contents of the box, plus how to set everything up for your first game.  The 31-page softback rulebook is really easy to access, uses plenty of examples and has some great artwork from the Mike Mignola comic books. The core rules are explored with plenty of images for reference.

Beneath the rulebook are the various card elements to the game. The first set of cards are for the characters included in the box, the four agents of the Bureau of Paranormal Research and Defence. All the relevant game stats for each character are here, complete with Special Rules and Unique Actions.

Next comes the punchboards of tokens and markers, which are offered in top quality, heavy gauge card, followed in turn by the double sided game tiles. The artwork and overall quality of these is excellent, and maintains that ‘Mignola Style’ that any fan of the comic book would want to see. Also included is a gameplay ‘dashboard’ to record progress and aid with map creation.

The all-important miniatures are next, and these are just excellent. Based upon the same one piece plastic style as those from the same company’s Walking Dead game, the quality here is perhaps even better, with even the largest creatures being one piece, highly detailed figures. Again, these are all inspired by the comic book rather than the movie, but are all the better for it. The figures all come in a plastic tray, with a transparent cover, which may be used to store them. Even the different game dice have a space provided for them, so the box doubles as a carry case.

This ‘storage solution’ approaches continues right down to the last set of components in the box. The decks of cards are here, the BPRD Case Files or scenario cards, the Deck of Doom which offers random events and adversaries during the game, the Encounter cards and the various plastic tokens are all here, in a plastic tray with spare capacity for storage of other components.

No doubt about it, this is a top quality, modern product, with very high production values. This big budget game bypasses the need for assembling miniatures, components on flimsy card and ziplock bags to store your components. This is also a product which would interest any fan of the Hellboy comic series, with powerful visuals and gameplay that puts you into the action as one of your heroes. Quite frankly, this is a rather marvellous entry into the miniature boardgames market and well worth picking up by fans or anyone looking for an example of how to present games of this type.