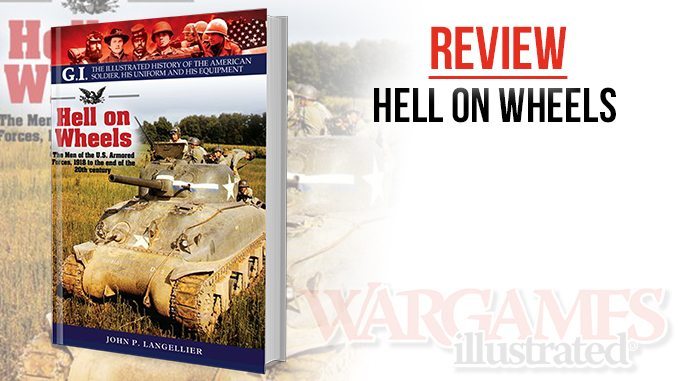 Hell on Wheels is part of the G.I. series from Pen & Sword books, though it was previously published by Greenhill books in 1999. Like others in the series, this book begins with an introductory overview, this time for the “men of the United States Armored Forces from 1918 to the end of the 20th Century”. That is followed by a catalogue of photographs, some of them in colour, depicting the men who served their tanks from World War I through World War II, the Korean War, Vietnam War, and beyond.

It is sometimes startling to think that less than a century ago, the United States had no tanks or indeed a notion of how to use them. The man tasked with fixing that was Lieutenant-Colonel George S. Patton who would become arguably its finest exponent in World War II. Still, well into the inter-war period, the American Armored Force consisted of French Renaults that can best be described as dinky. Even entering that major conflagration, the Americans did not have a heavy tank, though by the end of the war their proliferation of tanks, particularly the almost ubiquitous Sherman, made up in numbers what they lacked in quality. The Sherman gave way to the M48, considered synonymous with what little tank action there was in Vietnam. That in turn gave way to the M60, as American tanks became heavier, and then came M1A1 Abrams, a true behemoth among modern tanks. Hell on Wheels follows the evolution of the main American tanks, but it is more focused on the men and their varying uniforms and headgear. It seems that American tank crews have always improvised their uniforms as much as they have personalized their tanks, making for many interesting photographs. While there is not too much for wargamers in Hell on Wheels, military modellers will certainly draw inspiration, and the Bolt Action types will enjoy the variety of details they can add to their Shermans, M3s etc.