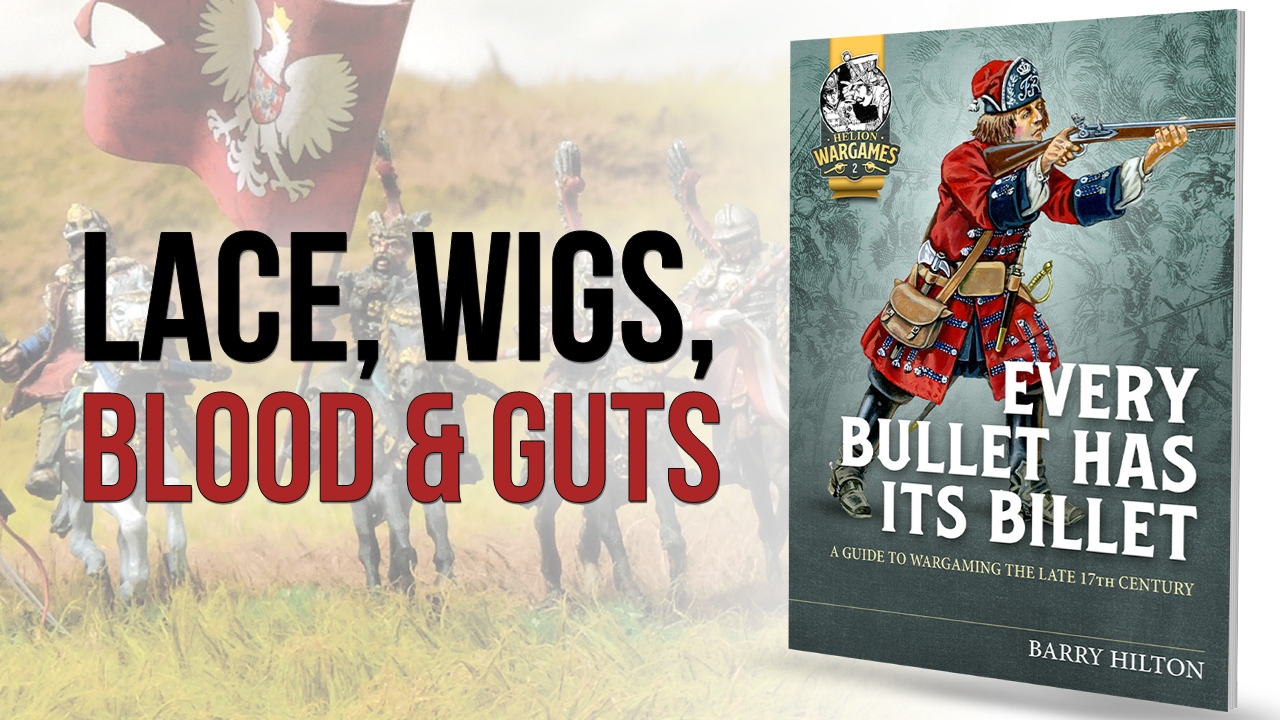 In Every Bullet Has Its Billet, renowned wargamer Barry Hilton offers a wargaming guide to the late 17th Century. The format is a glossy, magazine-style book of 124 pages broken down into nine sections. With Helion’s usual high quality production, Hilton’s authoritative and knowledgeable text, and lots of colourful wargames picture, this slim volume hits its target dead-on.

Straight off the bat, Hilton dispatches the elephant in the room: what late 17th Century warfare? Perhaps like me you thought that nothing worth wargaming happened between the end of the Thirty Years War in 1648 and Marlborough’s string of spectacular victories at the start of the next century. You would be wrong! Hilton takes us through a list of interesting wars: the Anglo-Dutch Wars; French wars against the Netherlands; wars in Central Europe of various sizes; lots of fighting involving Ottomans; the Monmouth Rebellion (of course!); a couple of smaller affrays in Scotland and Ireland; the Nine Years War; trips to India, the Caribbean, and North America; and not to forget a plethora of naval actions. Hilton writes neat summaries of all those and includes a further reading section at the end of this book for deeper research. With all that wrapped up, he gets down to gaming.

Every Bullet Has Its Billet introduces us to the soldiers that we hope to emulate. The author  first considers them generically: uniforms, weapons, and flags, types of soldiers, and how they deployed and fought. He then digs into the main protagonists, highlighting their particular traits and how to organise and paint them: Denmark, England, France, the German States, the Holy Roman Empire, Jacobites, the Ottomans, Russia, the Italian States, Spain, Sweden, and the United Provinces of the Netherlands. He helpfully adds the naval forces for each of those States.

How to wargame all of this is next on Barry Hilton’s agenda. He surveys battles on land and sea, pointing out the vagaries of warfare in this period, particularly the ‘blunder-rich’ tactical environment that adds to our wargaming fun. The book stresses the rough and tumble nature of the battles, emphasizing their essence over fiddly technicalities. To his credit, the author does not push any particular set of rules, favouring the gaming experience whatever way you play it.

In conjunction with that, the book moves onto building and using a force. The author stresses the three types of engagements you can fight – skirmish, small battles, and the big battles – what scales to use, and how to get them onto the table. For skirmish, Hilton does push his Donnybrook rules, though why not, they are excellent. Small battles are for four to 12 units and the more generic the better for wider wargaming choice, while larger engagements may contain dozens of units; but “go for it” is the author’s advice, and again, why not? He notes, though, that compromise between gaming and historical reality is essential to make wargames work. In among this are discussions on unit sizes and basing. Those same considerations are put into place when promoting naval warfare – the ship models here are jaw-dropping. Some scenarios for naval and land actions, complete with maps and orders of battle, conclude this section.

Practical wargaming is at the heart of this book, therefore Hilton’s inclusion of a troubleshooting guide is very useful. He notes problems with basing figures, using bayonets, dye technology and inconsistencies, how many flags to use and their sizes, figure compatibility, infantry speed and manoeuvring, how pikes are represented, ship ratings and flags, shooting ranges, hats, unit titles, and personalising wargames to enhance the experience. Two brief chapters follow on how to paint soldiers and ships, and he closes this with a brief guide to gaming resources and the aforementioned section on further reading.

Every Bullet Has Its Billet is a delight from start to finish. Barry Hilton’s enthusiasm for his period shines through and his argument for playing late 17th Century warfare is compelling. He also does not miss any potential objection to playing this fascinating era of warfare. It should be easier for English Civil War or Thirty Years War gamers to stretch out to this period with their current resources than for early 18th Century wargamers to reach back, but that is not a knock on Hilton’s excellent guidance for what is for most of us a leap into the unknown.

Well, it was unknown, but thanks to Every Bullet Has Its Billet late 17th Century wargaming has arrived and waiting for you to play!

Those nice people at Helion and Company are offering Wargames Illustrated readers 20% off ‘Every Bullet has it’s Billet’ throughout February and March 2021, just use this code when you checkout via their online store – BULLET20