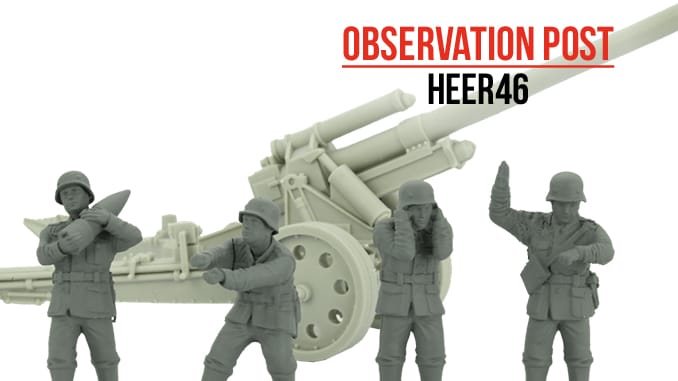 Heer46 have become specialists in the World War Two era. Having started out as a company which focussed upon a continuation of the war into 1946, they have released a wealth of miniatures suitable for other aspects of the war, focusing not only on the Eastern Front but also on the Mediterranean campaigns.

In addition to a wealth of individual figures in both 1:56th and 1:48th scale, the company also produces a number of resin vehicles and artillery pieces. One of the main focusses of the range is the German forces and one of the latest releases is a 15 cm sFH 18 in 1:56th scale. This is a large artillery piece, a field howitzer, used for fire support by the German army throughout the war. This is an impressive kit in resin, which contains a wealth of detail not always found on other similar examples in this scale.

The next release is a four-man German artillery crew, suitable for use with the howitzer noted above, or any other large weapon. The crew is posed in various stages of firing a gun, one preparing to load holding a shell, an officer or NCO checking his watch and ready to lower his hand to fire, a figure ready to open the breach and the last ready with his hand over his ears. All the figures wear the classic tunic and jackboots uniform which was to be found not only in the early war period but pretty much throughout the conflict on every front.

The next few figures are single figures attired for service on the Eastern Front, all representing officers in the German army. We have an officer in greatcoat and cap, with a pair of binoculars around his neck. He is posed with fist in the air, clutching a KAR98K rifle in his left hand.

Next is a figure in fur hat and fur-lined coat, carrying a Panzerfaust in one hand and holding the sling of an STG44 assault rifle with the other. His coat is open, revealing his map case, revolver holster and a pair of binoculars.

The last figure is a Fallschrimjager officer, as denoted by his jump helmet. He wears a quilted, hooded oversuit, no doubt over his own uniform. His equipment consists of a belt with MP40 magazine pouches, a mess tin and canteen hanging from the back of the belt. A stick grenade is stuck in the front of his belt, and he holds an MP40 in his right hand.

These are exceptionally detailed sculpts, based upon 3D sculpting technology. They are very accurately scaled, and are far less exaggerated than figures from other manufacturers. Heer46 can be relied upon to cover the obvious, not so obvious or the ‘almost-was’ in some detail, and it’s always worthwhile popping by their website or Facebook page to see what they are up to.