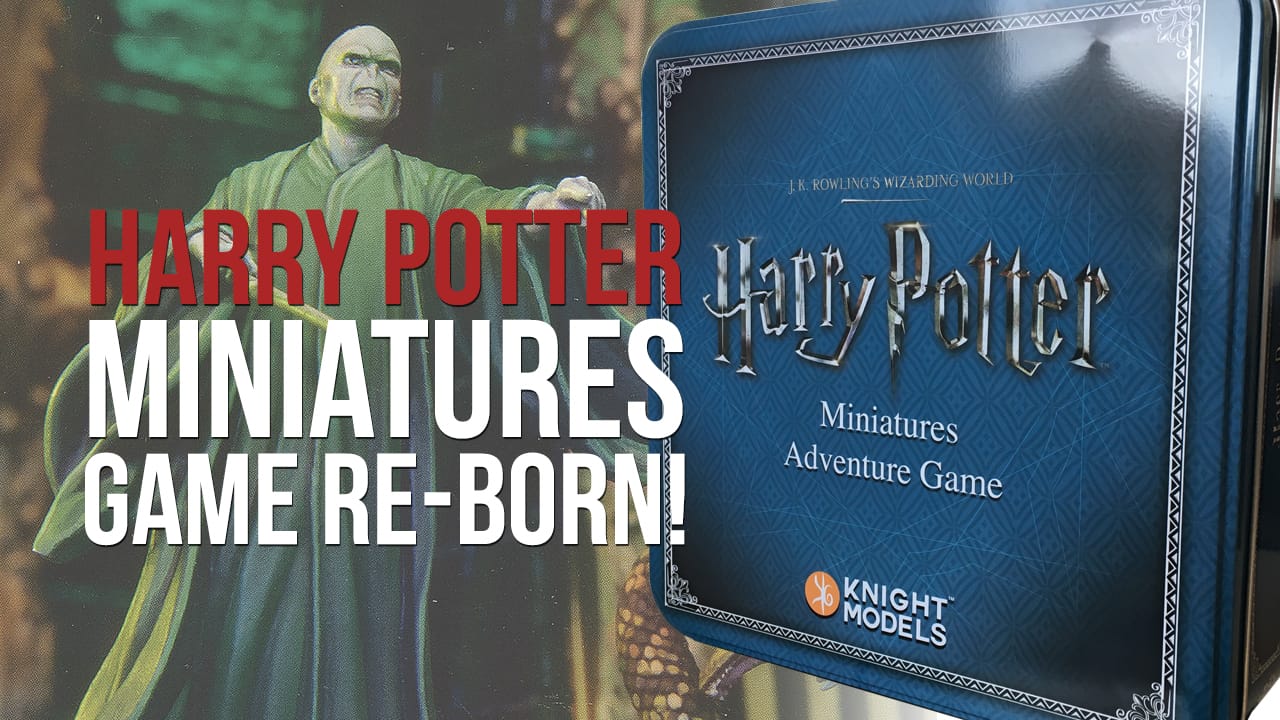 Knight Models have created a new version of the Harry Potter Miniatures Adventure Game, re-packaging it and clarifying many of the rules into a more streamlined version. The re-born boxed set now comes in a ‘biscuit tin’-style cover, with more deluxe ‘fixtures and fittings’.

Once you lift the lid of the tin, the first thing you see is the rulebook. This is an A5, softback book with only 95 pages. The rules flow very easily, and provide options for creating and customizing a group, various modes of play such as duelling, campaign and cooperative, and a number of scenarios that can be played as one-off and narrative adventures. The rulebook is well laid out, in a very gamer friendly style, and has some great artwork and photography.

Next come the punchboards full of markers. Damage and effect markers, a Cooldown Clock, Power Points, objective and Patronus markers, plus character markers for Harry, Ron, Hermione and some of Voldemort’s followers. After the punchboards come the game boards, three double-sided folding playing areas which match the images for the scenarios and are used individually or in conjunction with one another. There are also game board overlays which are used to adapt the game boards to suit the particular aspects of a scenario.  Both punch and game boards are made from heavy gauge, hard wearing card, with a durable finish on the game boards suggesting that they would stand up well to prolonged usage.

Beneath the game boards is an area of foam packaging, akin to that found in miniatures carry cases. This is merely a ‘cushion’ between the markers and game boards and what lies below. Lifting the foam reveals a plastic tray which holds all the easily lost or damaged components. Gone is the quite flimsy, clear plastic of the first edition, replaced with a more robust plastic in black. In the recesses of this tray can be found some of the main tools used in the game, namely the Campaign, Event and Quest cards, plus the all-important Character cards and the Adventure, Artefact, Potion and Spell information that act as the main ‘drivers’ of the game. Also present are the miniatures which match the character markers, produced in a high quality resin. Most of these require some assembly but the final product is well worth the effort. These are excellent renditions of the different characters, which, when assembled and based, can be used as they are or painted. Lastly, we have six dice, in either white or blue, which are used during gameplay.

Overall, this is a well packaged ‘canned’ set that offers a slightly enhanced, more ‘deluxe’ feel compared to the previous version.  Much of the gameplay will be familiar to those who played the first edition, but the rules and ideas shown here have a faster, more streamlined theme, and are very user friendly. The packaging design is such that the game can be carried around in the box with little or no fear of losing key elements. Overall, this is a great looking product that is worthy of the franchise that is behind it.