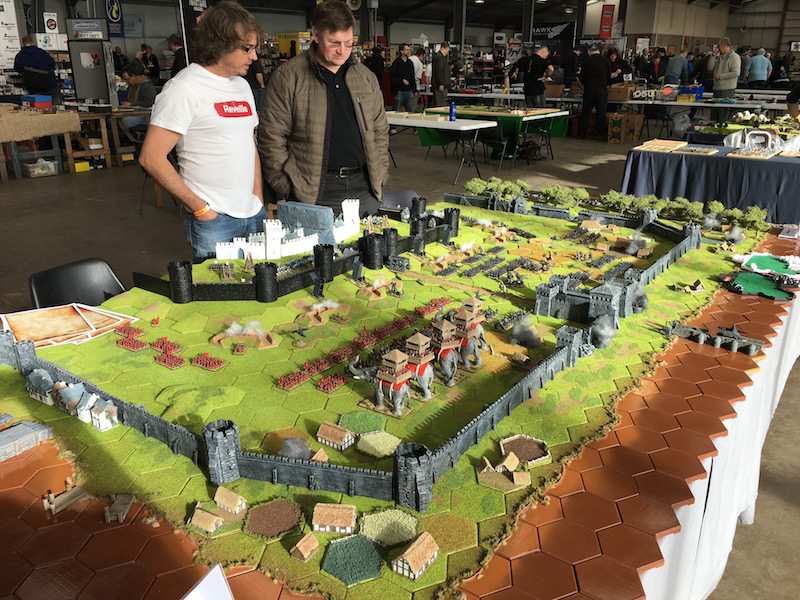 The guys and gals from Kallistra, with the able assistance of the Forest Outlaws Wargames Club, have created something really special at the Hammerhead Show held in Newark, Nottinghamshire, England. The buzz around the event is quite different to most other UK shows and, with the focus on participation games, the Tabletop Sale and now the ‘Gamers Lounge’, Hammerhead offers something fresh and different from many other UK conventions.

There is now so much going on, with a promise of even more next year, we really do need to devote more column inches to the event, but for now here’s our focus on some (sorry if we haven’t included yours!)  of the most eye-catching games from Hammerhead 2017.

Daniel Hodgson of Reveille Studios presented a great looking 12mm ‘The Siege of Minas Tirith and the Battle of the Pelennor Fields’ game.

Rules used were Hordes and Heroes, with figures by Kallistra, Copplestone Castings (15mm) and some old skool Citadel thrown in for good measure.

WIPrime members check out Dan’s 6mm Sudan collection via The Vault in WI 280.

One-hour Tabletop Sale slots were available for wargamers looking to turn their lead/pewter/plastic/paper mountains (or part of!) into cash.

The Derby Wargames Associates Lion Rampant game featured some of the most impressive fire and smoke effects we’ve ever seen and certainly the tallest smoke stack!

A Bolt Action game of the British Commando raid on the Lofoten Island was the subject of this great looking participation game by the Doncaster Gamers.

WI regulars Dave and Malc offered a Boxer Rebellion participation game, which we’re not saying too much more about as if features in an upcoming issue of WI!

Hammerhead regulars The South London Warlords presented a massive Dr. Who Invasion Earth game which used their own rules and featured figures from a variety of Diecast model manufacturers (including Corgi Daleks).

The boys from The Bunker were running a typically huge and eclectic game. They used figures drawn from toy shops, magazine covers, figure manufacturers and even 3D jigsaw puzzles (see the black and orange dragon) to populate their Oldhammer game board. Several weird and wonderful elements were included, like Disney characters for the kids to spot and Monty Python references for the adults to chuckle at.

Scarab Miniatures have been developing a set of World War One rules for a couple of years now and their game showcased the rules whist displaying their figures, along with those of Great War Miniatures and Woodbine Designs.

The Like a Stonewall group offered a wargames classic in the form of Rorkes Drift. Warlord Games plastic Zulus were used extensively as well as figures from other manufacturers.

See these games and more in movie motion action in the video with WI355 interactive, available for iPad.